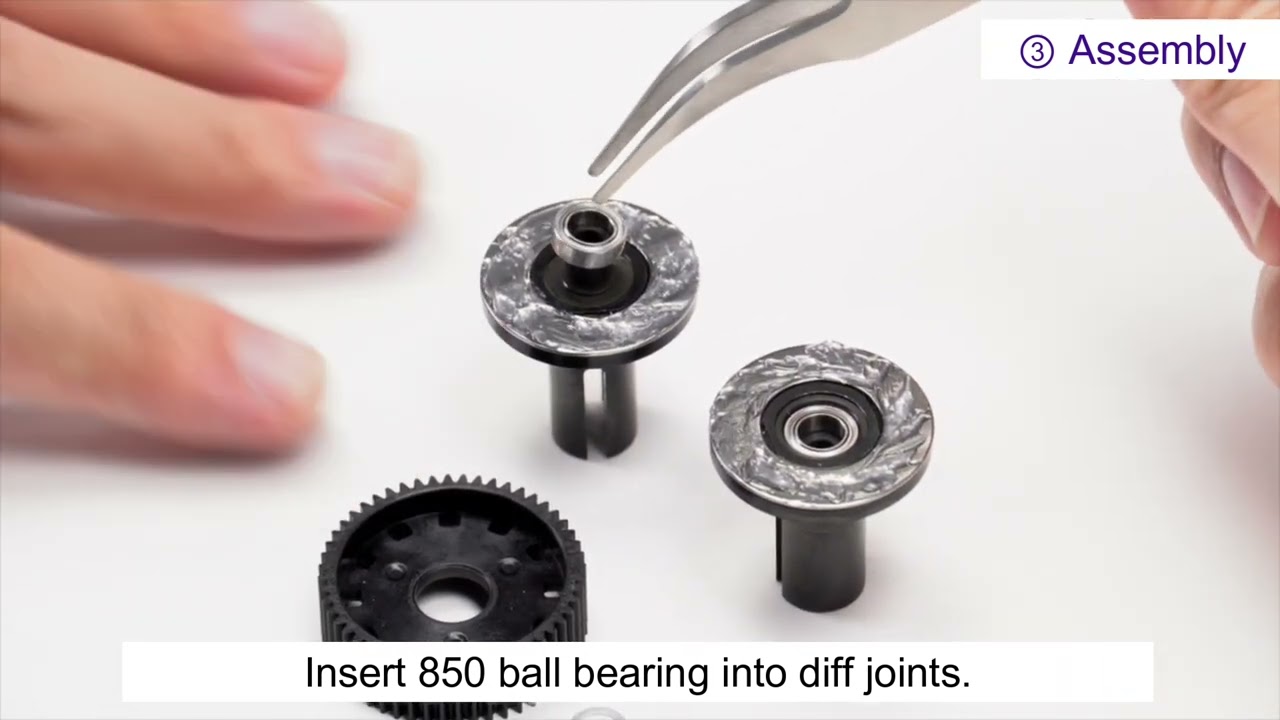 An in-depth look at how to assemble the ball differential found on the Tamiya TD2 and TD4 chassis. Take a look before building or running any maintenance! 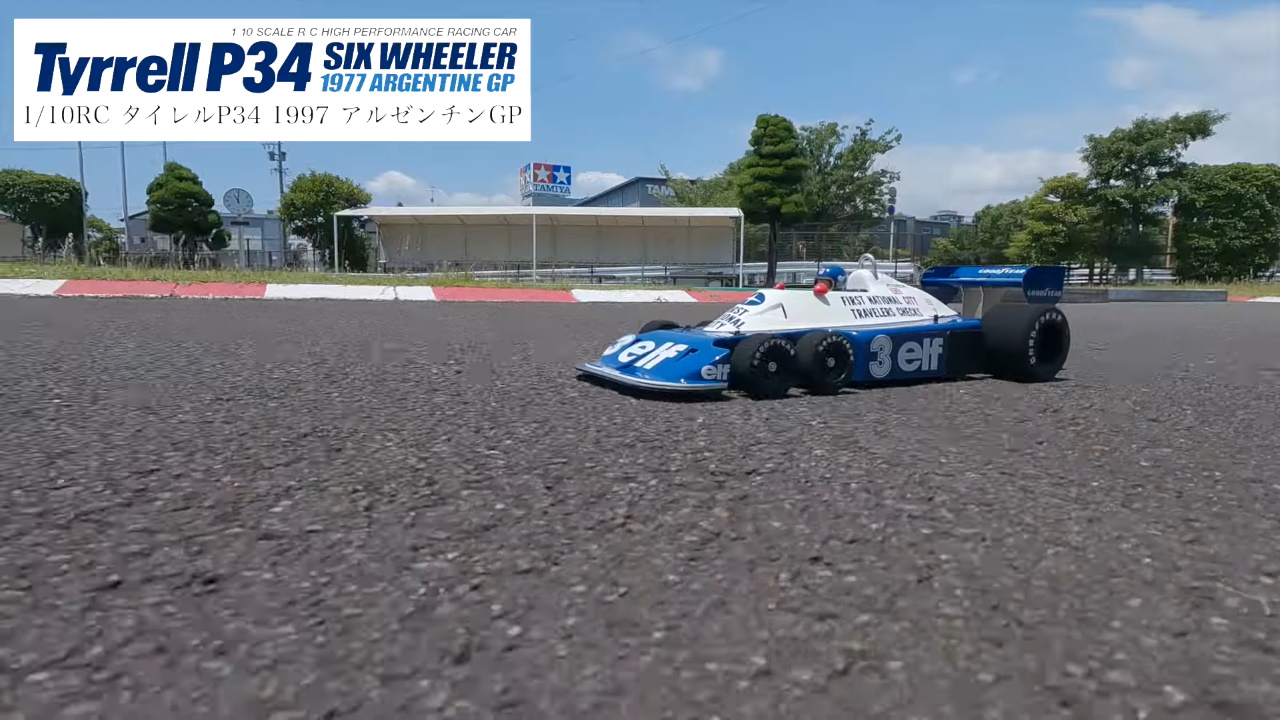 1976 saw the dawn of the P34, Tyrrell’s wonderfully inventive six-wheeled car with four smaller front wheels, that backed up its looks with solid results such as an impressive one-two finish for the team at the 1976 Swedish GP. At the 1977 season-opening Argentine GP, the P34 had a fully-cowled body adorned with a blue and white livery and First National City bank as a sponsor; that car is recreated by this 1/10 scale R/C model assembly kit. The body is injection molded in detailed yet durable plastic, with upper cowl sections molded in white and side pontoons in blue. Stickers are included for depiction of either of Peterson’s number 3 or Depailler’s number 4 cars, complete with Goodyear tire logos – just apply the stickers, and the body is ready!

Tamiya Grand Prix All Japan Championship Special
Advice on how to capture each class !! and Tamiya RC History ■ As a special for Tamiya Grand Prix All Japan Championship, we will advise you on how to capture each class. ■ Introducing the main pattern of each class final A of the Tamiya Grand Prix Kakegawa tournament held in May. You can see the powerful race scene of the “JJ Grand Prix” that you can enjoy with junior and female drivers, the “M Sports Grand Prix” that is a compact machine competition, and the “GR86 & BRZ Grand Prix” class that was held only with the new 86 and BRZ body. ■ We will also deliver information on “1/35 RC Tank M4A3 Sherman (with dedicated radio)” and “1/10 RC McLaren Senna (TT-02)” announced on the Tamiya website. ■ Tamiya RC History will continue to introduce items released in 1995. Please see “NISMO Clarion GT-R LM 95 Le Mans Participation Car”, “Isuzu Mu TYPE X”, “Toyota Tom’s XIV JTCC”.

Special just before the release of XV-02PRO
Introduction of advice and holiday meeting about XV-02PRO & Tamiya RC history ■ As a special live just before the release of “XV-02PRO chassis kit”, Tamiya Maezumi and TRF Kono made the chassis. I will give you some advice. ■ Introducing recommended optional parts for “XV-02 PRO”. ■ Excitement with a large number of participants Holiday meeting held on 6/18 (Sat) ・ BUGGY, Holiday meeting held on 6/19 (Sun) ・ We will also deliver the pattern of RALLY. ■ In Tamiya RC History, items released in 1995-96 have appeared. Introducing the “Alpine A110”, “Ford SVT Mustang Cobra”, and “Castrol Toyota Tom’s Supra” that have been reproduced in detail.

Tamiya RC Film Festival 2 Excellent work announcement << 1 >> and Tamiya RC history!
■ Twitter posting project “” held from April to May#Tamiya RC Film Festival 2We will send you the first half of the introduction of excellent works. ■ In Tamiya RC History, items released in 1995 have appeared. Introducing the “Fiat Abarth” and “Opel Vectra”, which are reproduced with separate parts up to the engine part, and the shaft drive 4WD buggy “Dirt Slasher”.

Tamiya RC Film Festival 2 Excellent work announcement << 2 >> and Tamiya RC history!
■ Twitter posting project that collected more than 250 entries#Tamiya RC Film Festival 2We will deliver the latter half of the introduction of excellent works. And we will also announce each award-winning work! ■ Tamiya RC History introduces the RC released in 1995. The racing trucks “Ford F-150” and “Volkswagen Golf VR8”, and the “Celica GT-FOUR” that was the base of the WRC machines at that time will be released. * Each delivery is scheduled for 60 minutes 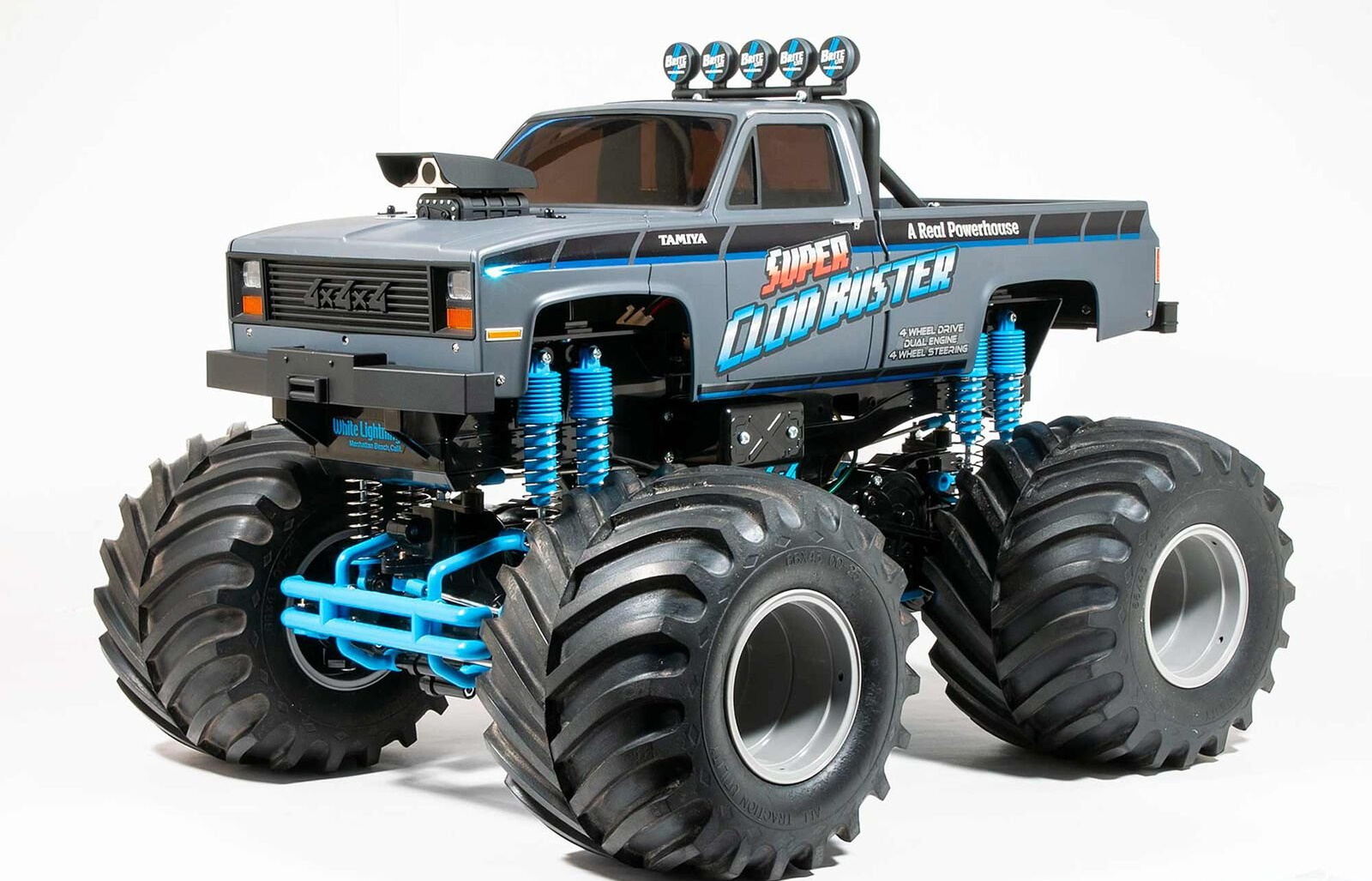 According to some sources it will be sold in the USA only. 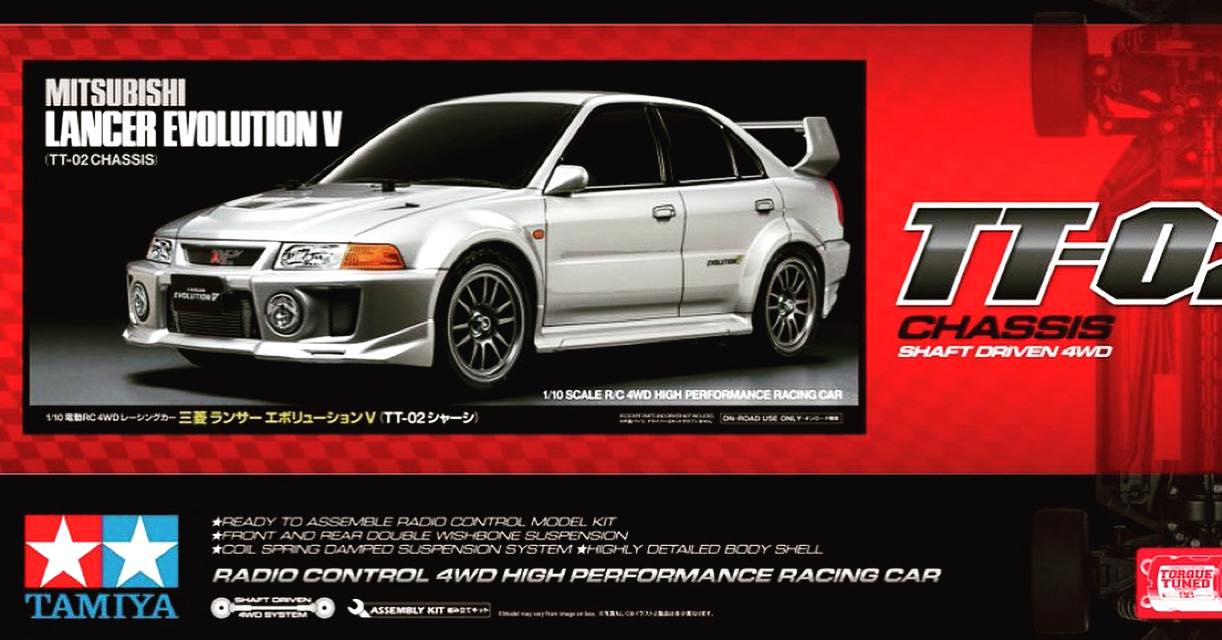 Tamiya is pleased to announce another classic racing car matched to the popular TT-02 chassis, this time the McLaren Senna which is already in the Tamiya assortment in a static version in 1:24 scale, code 24355
Model features:
– This is a 1/10 scale RC car assembly kit. Length: 466mm, width: 194.6mm, height: 118mm. Wheelbase: 257mm.
– The shape of the McLaren Senna is faithfully reproduced in transparent polycarbonate and the wing and wing mirrors are made of black ABS.
– It is based on the TT-02 4WD chassis with cardan drive which offers high adaptability with various types of configurations as well as being easy to build and low maintenance.
– It features the L Urethane bumper (TT-01/TGS) (part number #51226) that helps protect the bodywork from impacts.
– The 10-spoke moulded wheels in Gun Metal colour are matched with radial racing tyres (part number #50419).
– The bodywork requires painting, cutting, attaching components and stickers.
– Some export versions will include a Torque-Tuned motor.

Some of the scale models and new RC products that are being developed for sale are released. The 1/35 MM series and the 1/12 motorcycle series have two completely newly designed items, the 1/35 RC tank series M4 Sherman, which has been renewed with realistic connected movable tracks, and the 1/10 electric RC car series. Introducing the “McLaren Senna” machine named after the legendary F1 driver Ayrton Senna.
We will inform you as soon as the product release date and detailed information are decided.

35380 1/35 British Cruiser Tank Comet
Comet that appeared at the end of World War II as a British tank that can compete with powerful German tanks such as Tiger and Panther. The basic structure of the car body is based on Cromwell, and the large turret is equipped with a powerful QF77mm gun. It received high praise from crew and infantry as a tank with a well-balanced running offense and defense. The comet, which has changed to a more modern appearance, has been modeled on a 1/35 scale with a rich sense of reality based on actual vehicle coverage. 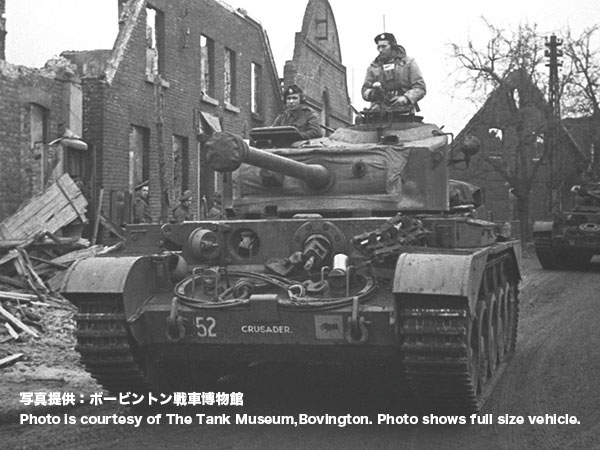 14140 1/12 Ducati Super Leggera V4
Was announced in February 2020 as the best model that can run on public roads in the history of Ducati, is assembled by skilled workers with generous pouring of Ducati’s technology. It is a world limited 500 premium bikes. The characteristic modeling is realistically reproduced, such as the V-type 4-cylinder engine, the four wings mounted on the front cowl, the seat cowl with tunnel-shaped openings on the left and right, and the two silencers integrated with the under cowl shape. Did. 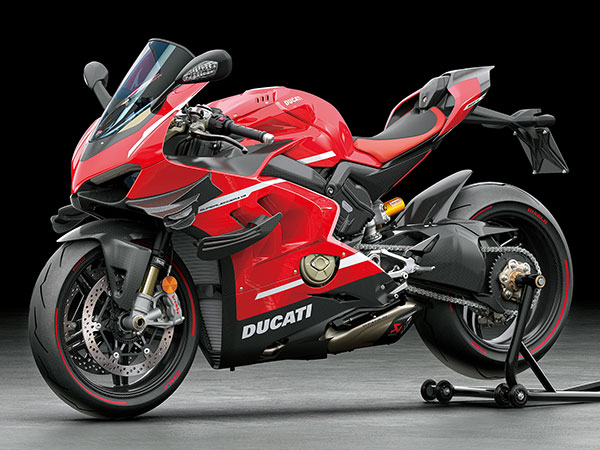 58711 1/10 RC McLaren Senna (TT-02 chassis)
McLaren’s super sports car announced at the 2018 Geneva show. Named after the legendary F1 driver Ayrton Senna, it is equipped with a 4-liter V8 twin-turbo engine that delivers 800 horsepower in a lightweight body that uses a lot of carbon fiber. The body has a functional shape that thoroughly pursues cooling and aerodynamics of each part. Although it is a limited production car of 500 units, the McLaren Senna, which attracted attention because it was already sold out at the time of announcement, was modeled with a 1/10 electric RC car. Shaft drive 4WD “TT-02 chassis” which is most suitable as an entry model is adopted for the chassis. The polycarbonate body is painted white and black, the window part is painted with smoke, the wheel arch is cut, and the body catch is drilled. 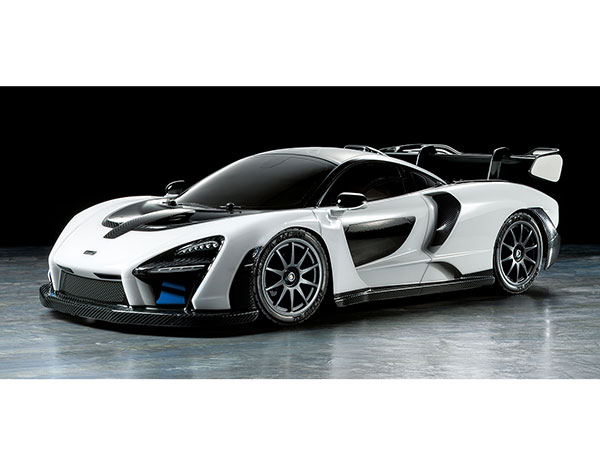 48217 1/35 RC M4A3 Sherman tank (with dedicated radio)
50,000 units were produced during World War II, winning the Allied Forces The main battle tank Sherman who led. We modeled the representative M4A3 among many variations as a 1/35 radio control assembly kit with a dedicated radio. In addition to forward / backward movement and left / right turning, the tank’s unique super-credit turning, turret turning, and barrel up / down can be operated with the transmitter. The maximum speed can be switched in 4 steps with the touch of a button. In addition, a movable track that can be assembled by connecting is adopted. Not only does it produce a heavy movement even at low speeds, but it also has an exceptional scale feeling when combined with the same precision plastic body as the 1 / 35MM series. I’m also looking forward to waving my arms for painting and weathering. 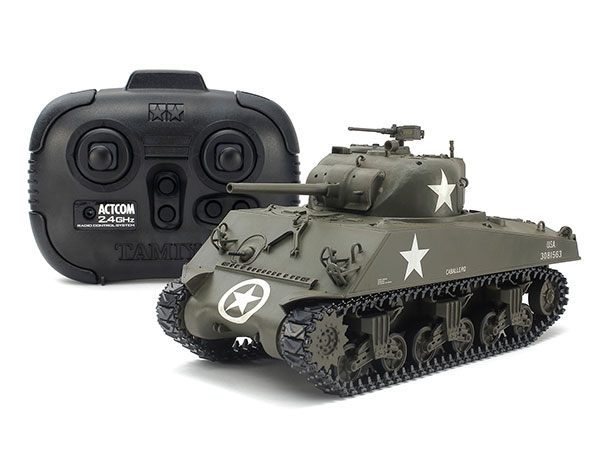 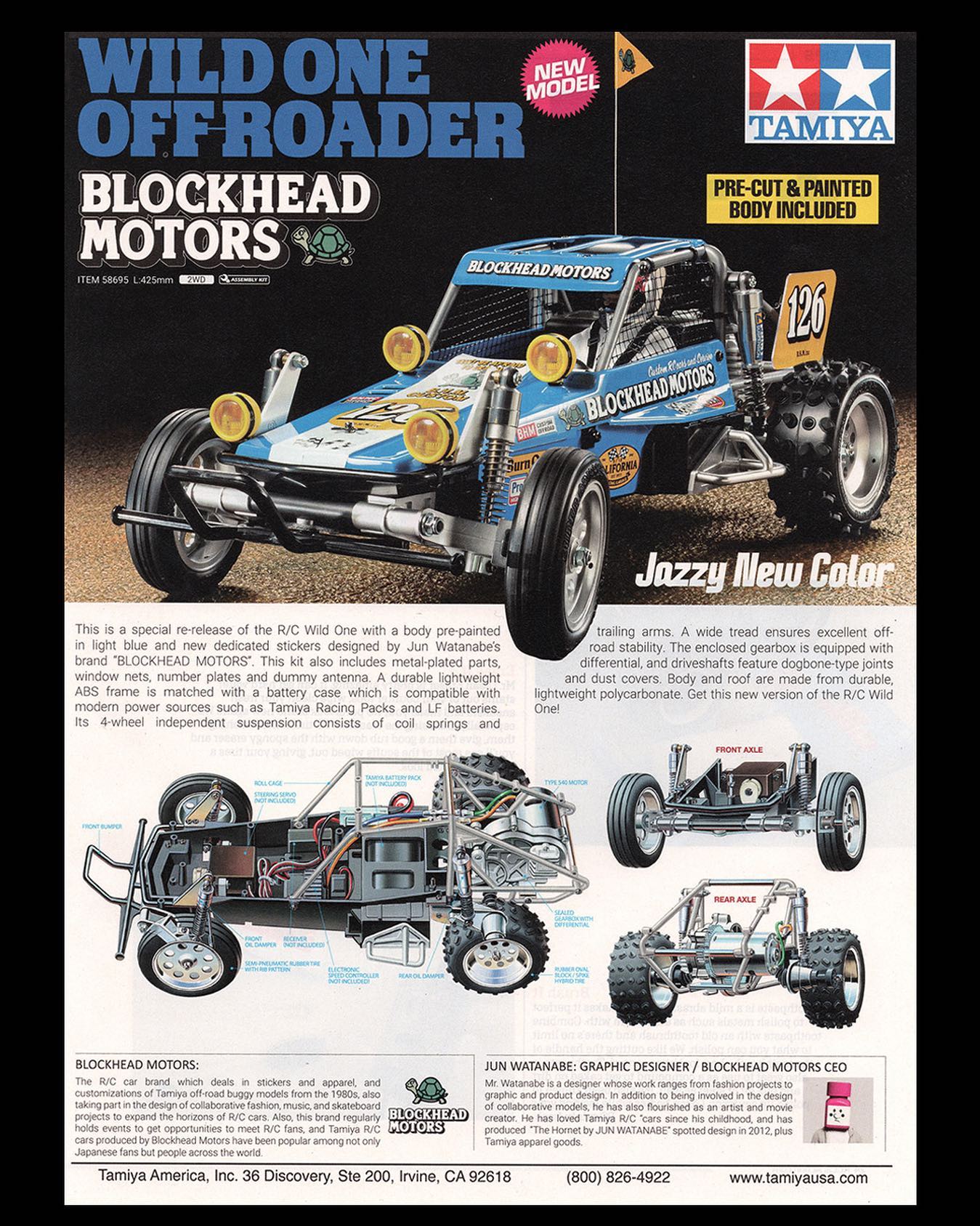 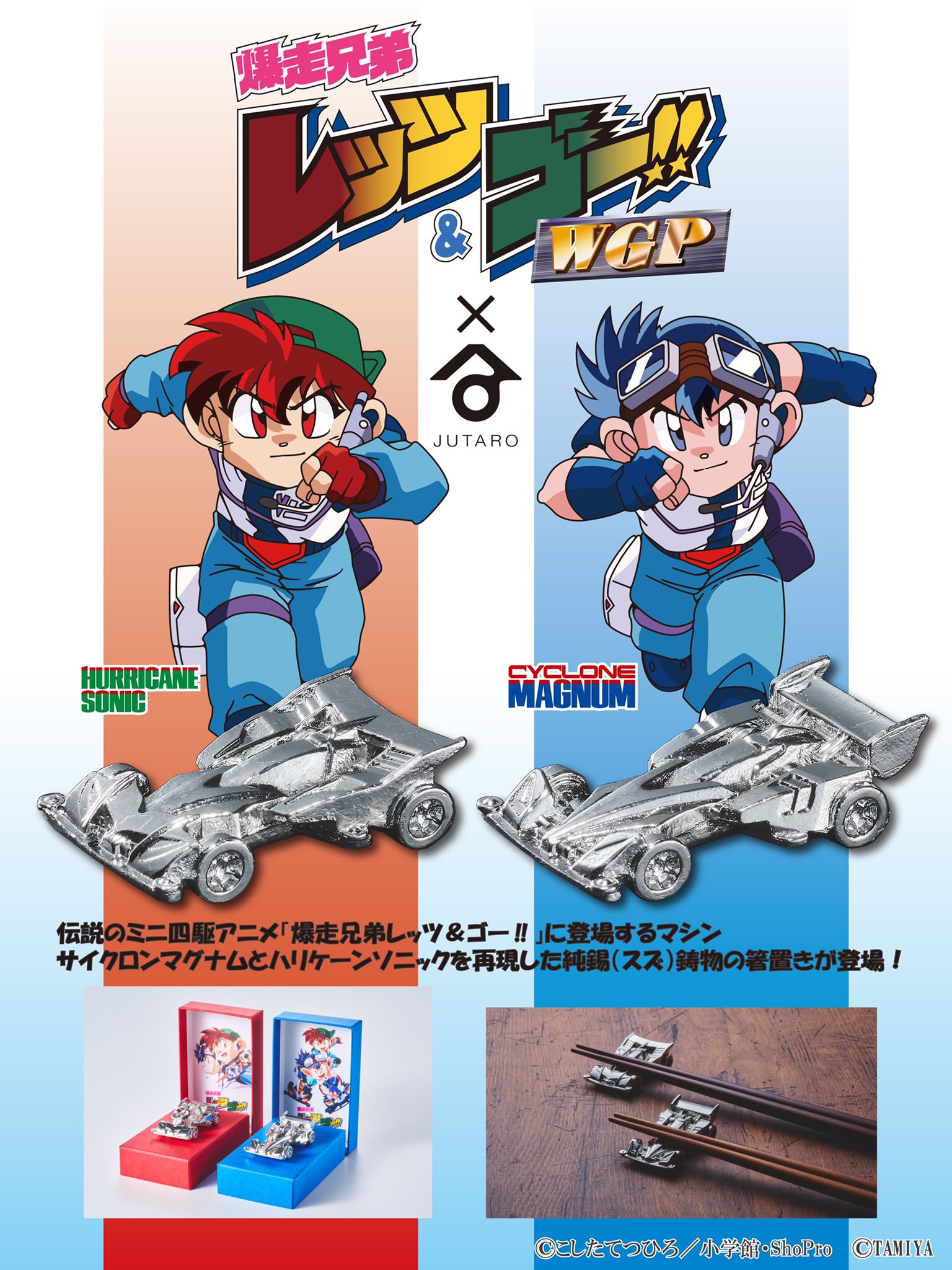 Pure tin casting that reproduces the machines “Cyclone Magnum” and “Hurricane Sonic” that appear in the mini 4WD animation “Bakuso Brothers Let’s & Go !!” from the Shizuoka casting brand “Shigetaro” developed by Kurita Sangyo.
This product is an item that reproduces “Cyclone Magnum” and “Hurricane Sonic” by the handiwork of a founder under the full supervision of Tamiya. You can also enjoy it as a display!
In addition, at the “Official Mini 4WD EXPO Shizuoka 2” being held at the Matsuzakaya Shizuoka store, product samples will be exhibited from Saturday, June 11, 2022
Scheduled to be released in the summer of 2022, the estimated price is 3,630 yen (tax included) each, so check it out for Mini 4WD fans!
Source: @KJutaro