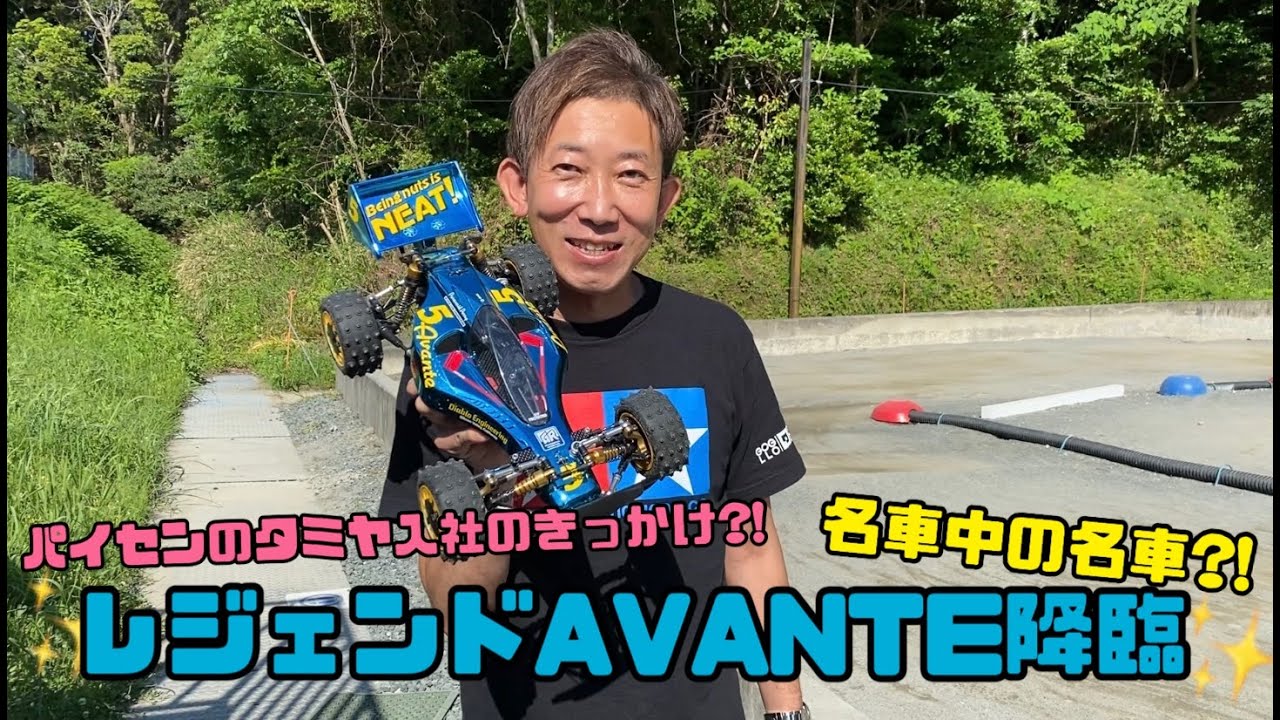 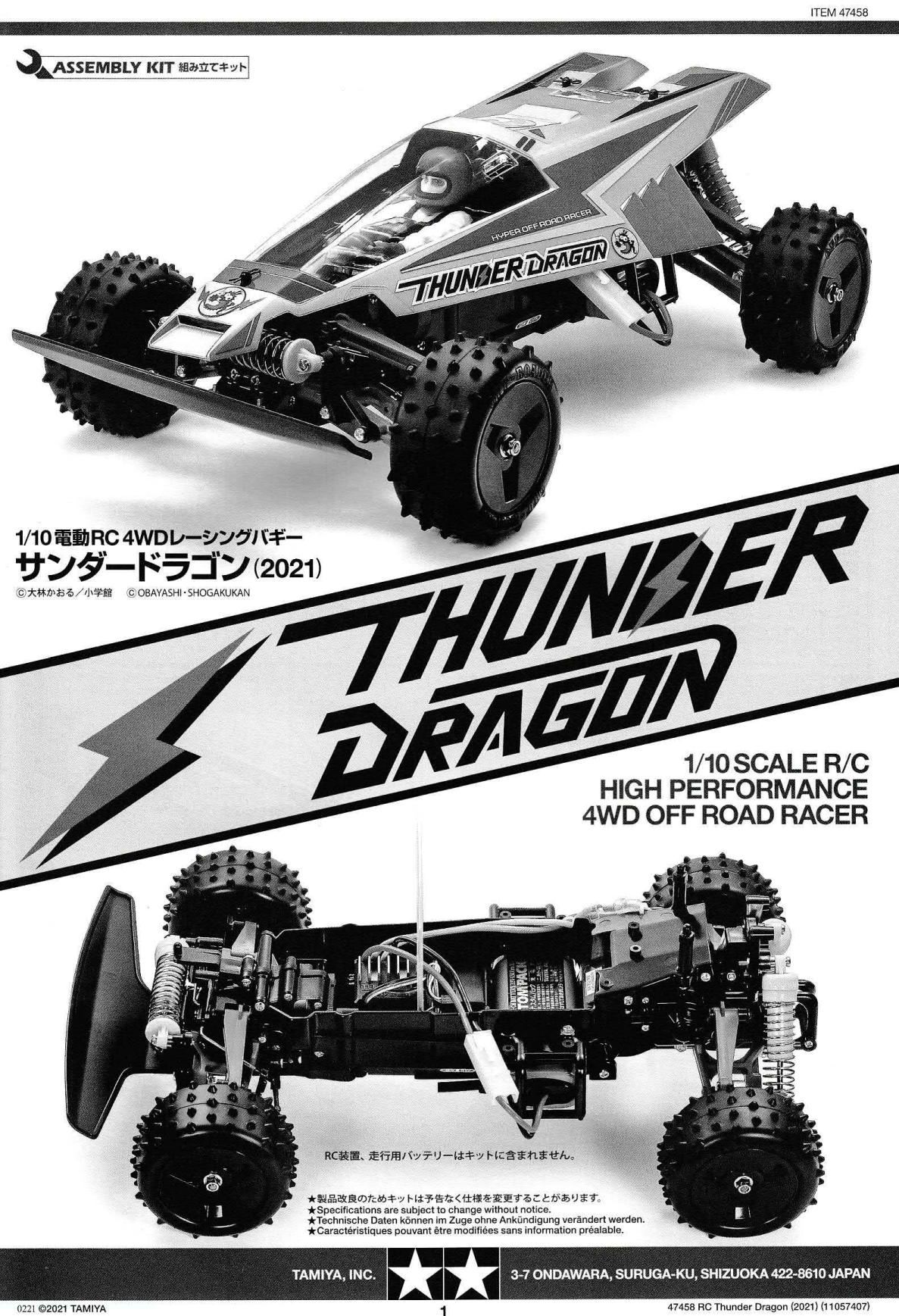 Click on the image to open/download the PDF manual

Customize as you like with abundant optional parts
Once you get used to maneuvering, I’m really looking forward to the settings and performance improvements to make the car easier to control. Tamiya’s RC car has abundant parts for that purpose. 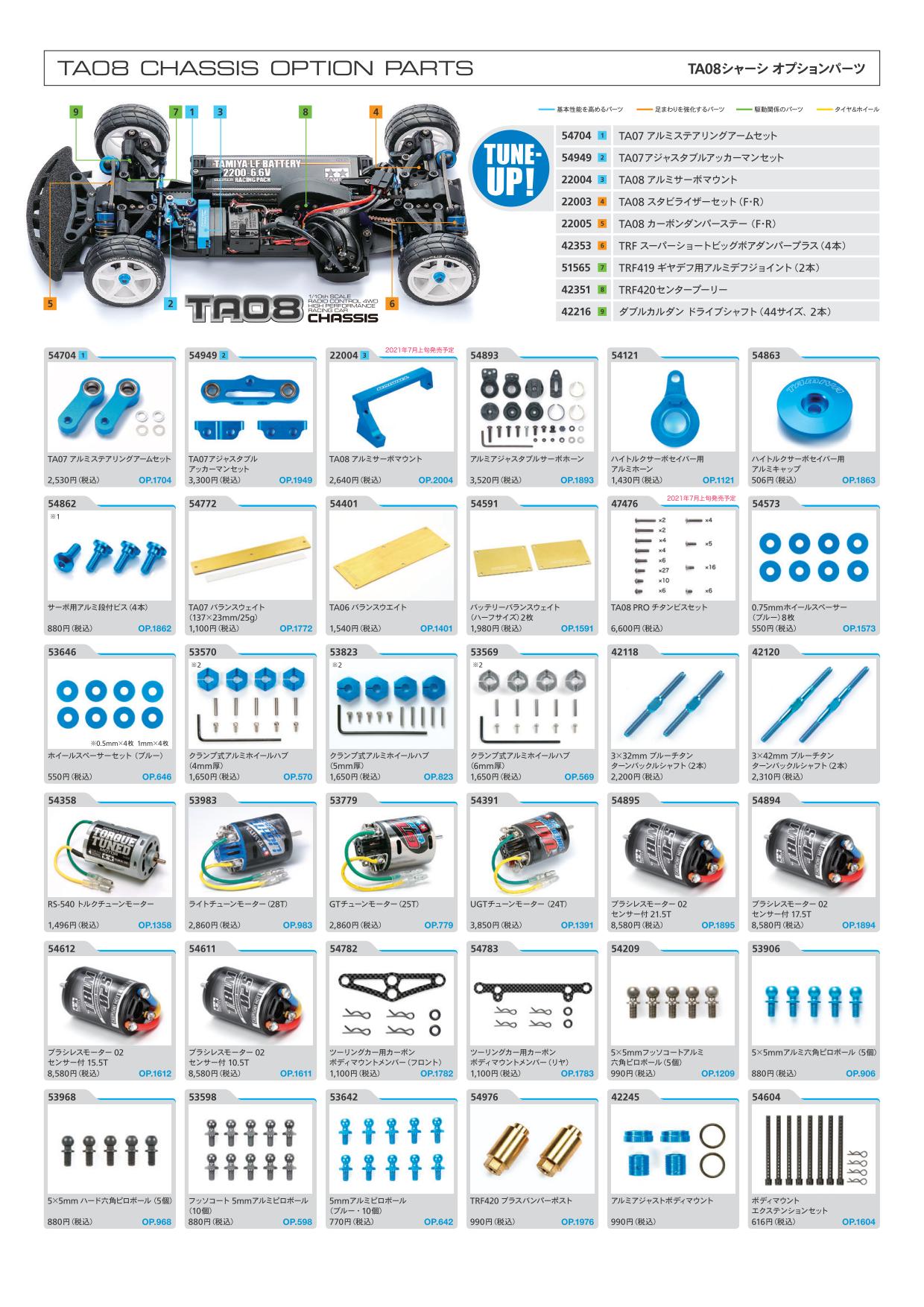 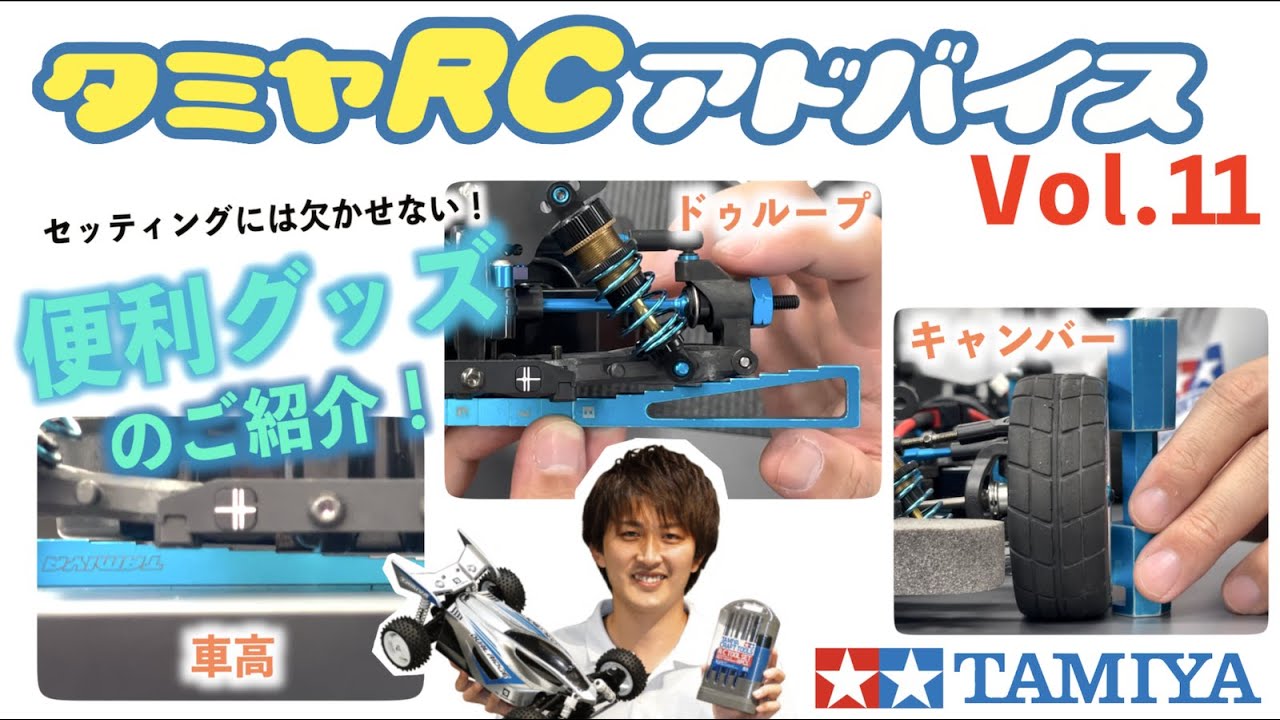 RC car setting that is indispensable for maintaining and improving driving performance. This time, the setting points and effects of the touring car model. We will explain in detail useful goods and how to use them. 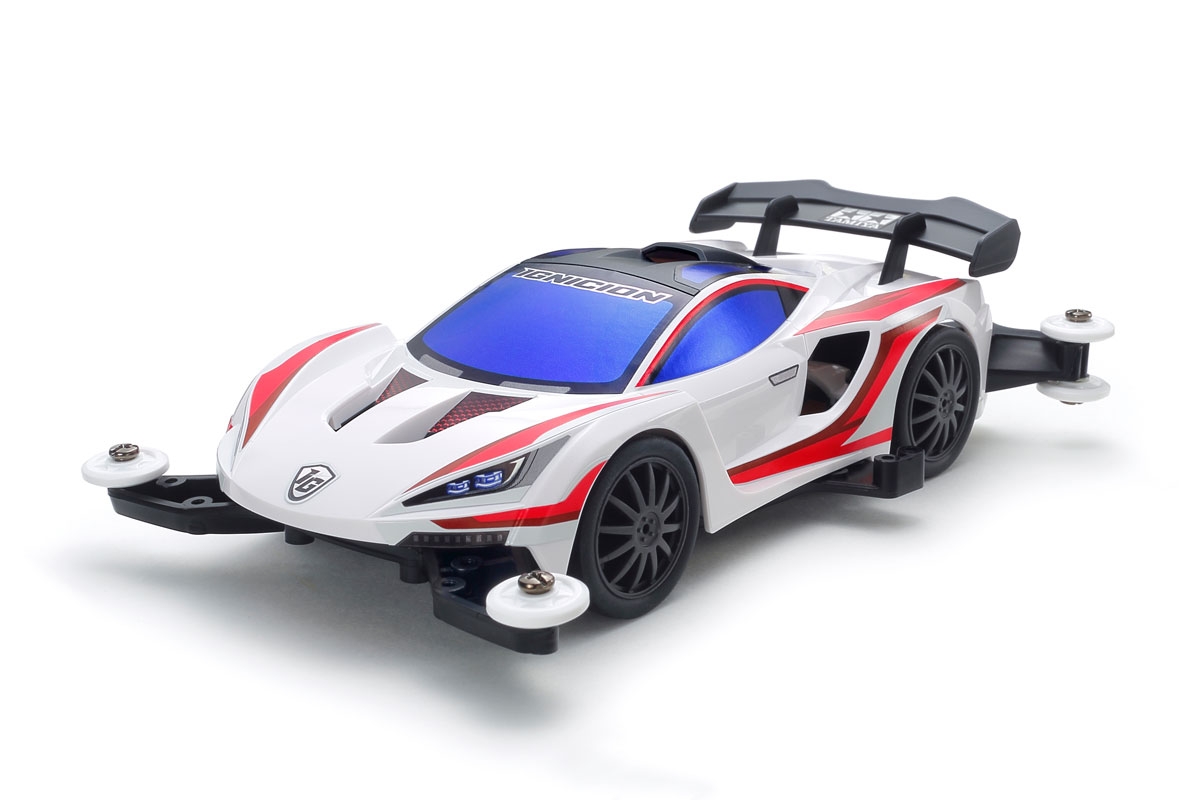 This Mini 4WD racer depicts the aerodynamic style of a hyper sports car with air intakes and ducts. Also, the rear wing recreates a modern GT racing car wing. The model’s name is based on the Spanish word “ignicion” which means ignition in English.

MA Chassis
The MA (Midship AERO) Chassis has its motor in the center, and features a design which focuses upon achieving outstanding aerodynamic performance. It has a gear ratio of 3.5:1, 6 individual rollers, a rear skid bar and other speedy features developed thanks to years of design experience. The single-piece monocoque frame also guarantees that assembling and keeping the car well-maintained is a task that can be performed by beginners and veteran racers alike. 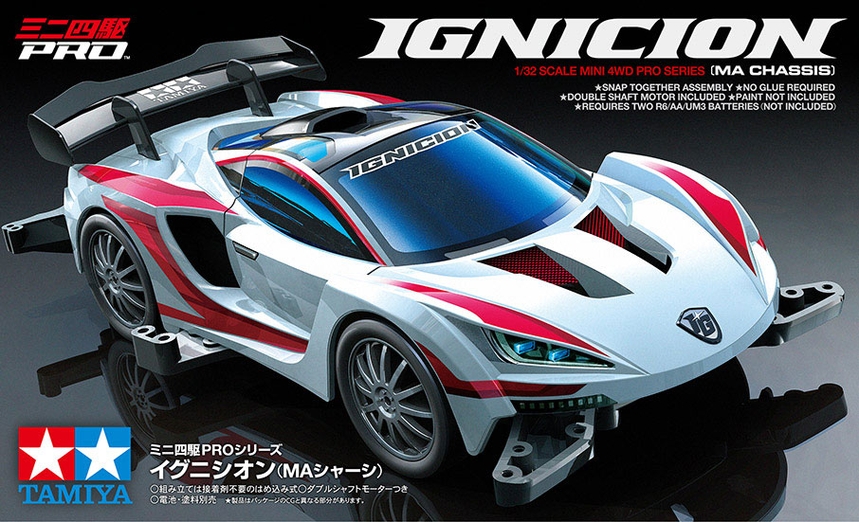 Attractiveness of the flowing style enhanced by silver plating
Hien is the only Japanese fighter equipped with a liquid-cooled engine in the Pacific War. Equipped with Ha40, which is a licensed production of the Daimler-Benz DB601 engine made in Germany. It featured a streamlined nose and an elongated main wing unique to a liquid cooler. It was officially adopted as a Type 3 fighter in 1943, and its armament was strengthened several times to counter the highly bulletproof US military aircraft. Among them, the I-type Ding, which has an extended nose of 20 cm and is equipped with two 20 mm cannons inside the fuselage and two 12.7 mm cannons inside the main wing, was a series from January 1944 to January 1945. A maximum of about 1,360 aircraft were manufactured. Taking advantage of its excellent high altitude performance and heavy armament, it exerted its power in intercepting the B-29 in the mainland air defense battle, and the strenuous battle of the 244th Squadron led by Captain Kobayashi who was in charge of the capital air defense is also well known, this Hien I It is a special specification kit that reproduces the pattern with silver-plated parts with high texture.

Model outline
1/48 scale plastic model assembly kit of Hien I type. ★ Overall length 187 mm, overall width 250 mm. ★ In addition to faithfully modeling the elegant style, parts such as the fuselage and main wings are plated with silver to reduce gloss, expressing a realistic texture. ★ The inverted V-type 12-cylinder Ha40 engine has been reproduced with auxiliary equipment such as a supercharger. ★ Parts such as the 20mm cannon, magazine, and oil tank in front of the cockpit are also included. You can feel the tight layout. ★ The windshield can be opened and closed. ★ In addition to 2 drop tanks, 1 pilot doll in a sitting position, and 2 types of markings, decals for spot camouflage are also included. 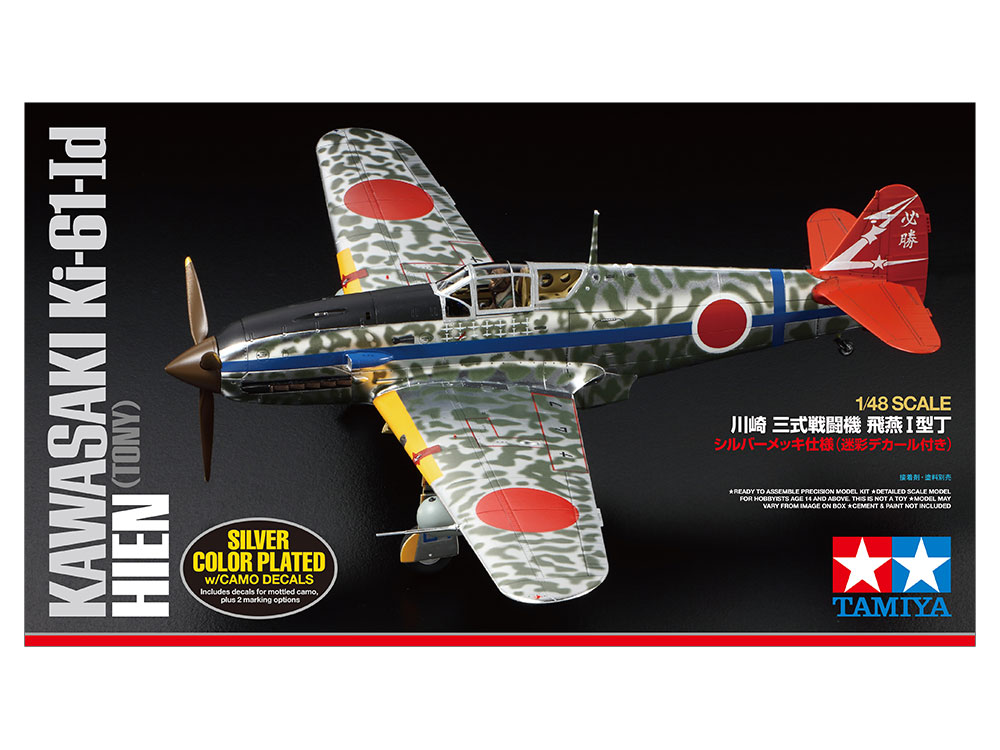 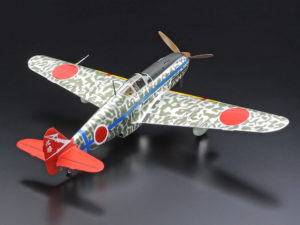 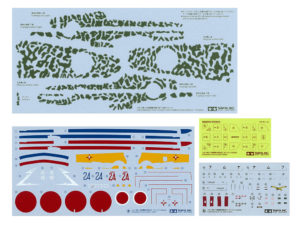 The spotted camouflage of the aircraft belonging to the 244th Air Squadron, which is difficult to reproduce by painting, is prepared with decals. Two types of markings and a mask sticker for canopy 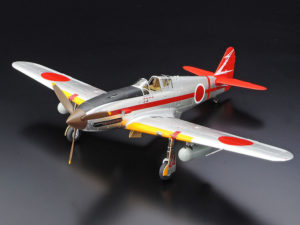 Kobayashi squadron boarding machine without spot camouflage, where the realistic texture of the plated parts stands out even more. 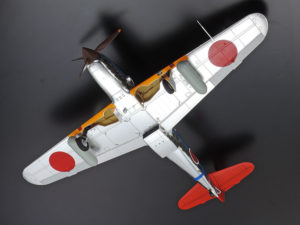 Equipped with two drop tanks under the main wing. Also pay attention to the details inside the main landing gear hangar and the sharp panel lines. 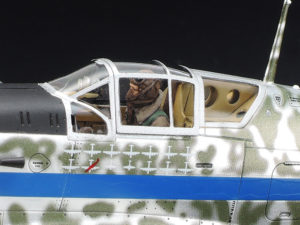 Comes with a sitting pilot doll. 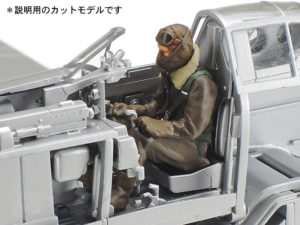 Around the cockpit full of three-dimensional effect. You can also feel the tight layout. 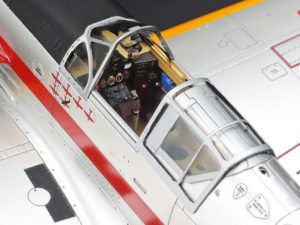 The windshield can be assembled by selecting two types of parts, open and closed. 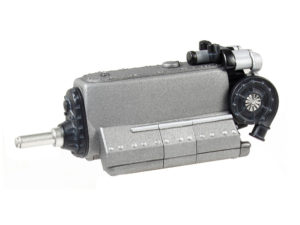 The inverted V-type 12-cylinder Ha40 engine accurately reproduces not only the main body but also auxiliary equipment such as a supercharger. 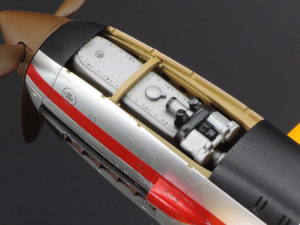 The upper cowl of the engine is removable. You can appreciate the mechanism of the engine built into the nose even after completion. 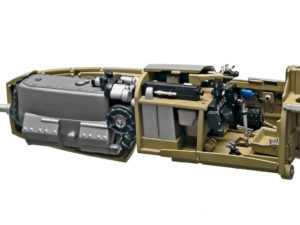 The 20mm cannon in front of the cockpit, magazine, oil tank, etc. are also made into parts. 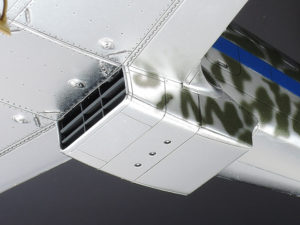 A semi-embedded water / lubricant cooler installed in the lower part of the fuselage. 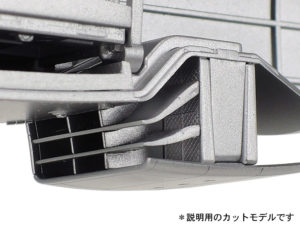 The rectifying plate in front of the cooler accurately expresses the shape of the actual machine by skillfully dividing the parts. 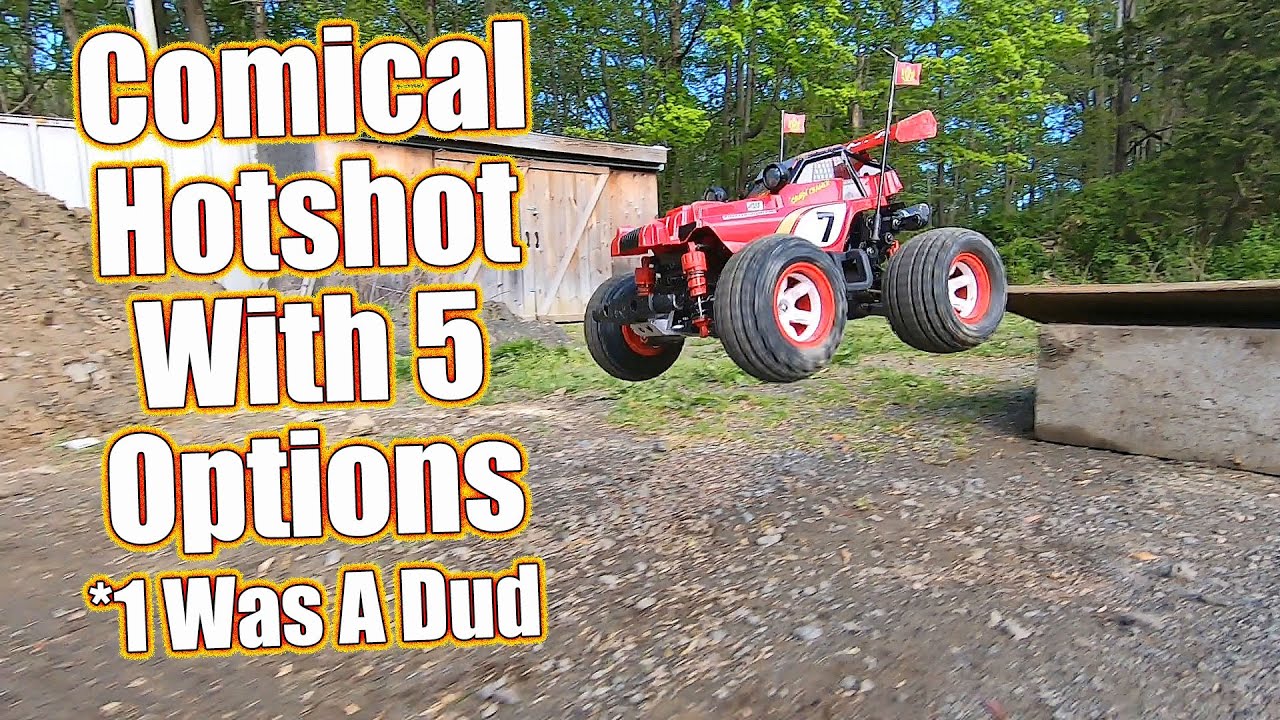 We have another fun RC Car from Tamiya for you to check out, it’s the Comical Hotshot. This is a cool addition to Tamiya’s comical RC car line-up that plays off of some memorable vintage cars. This fun version of the Hotshot body fits on top of the GF-01 CB platform which we reviewed before as the Comical Avante. So rather than gear up for a full review of a car we’ve seen, Greg decided to throw a twist into this review and bolt on five option parts available for the car. He sifted though the Tamiya website to find what he thought were 5 worhty options for you to see. Were his picks good? Or were they duds? Let us know what you would have chose if you were building this RC yourself!
Source: RC Driver YouTube channel 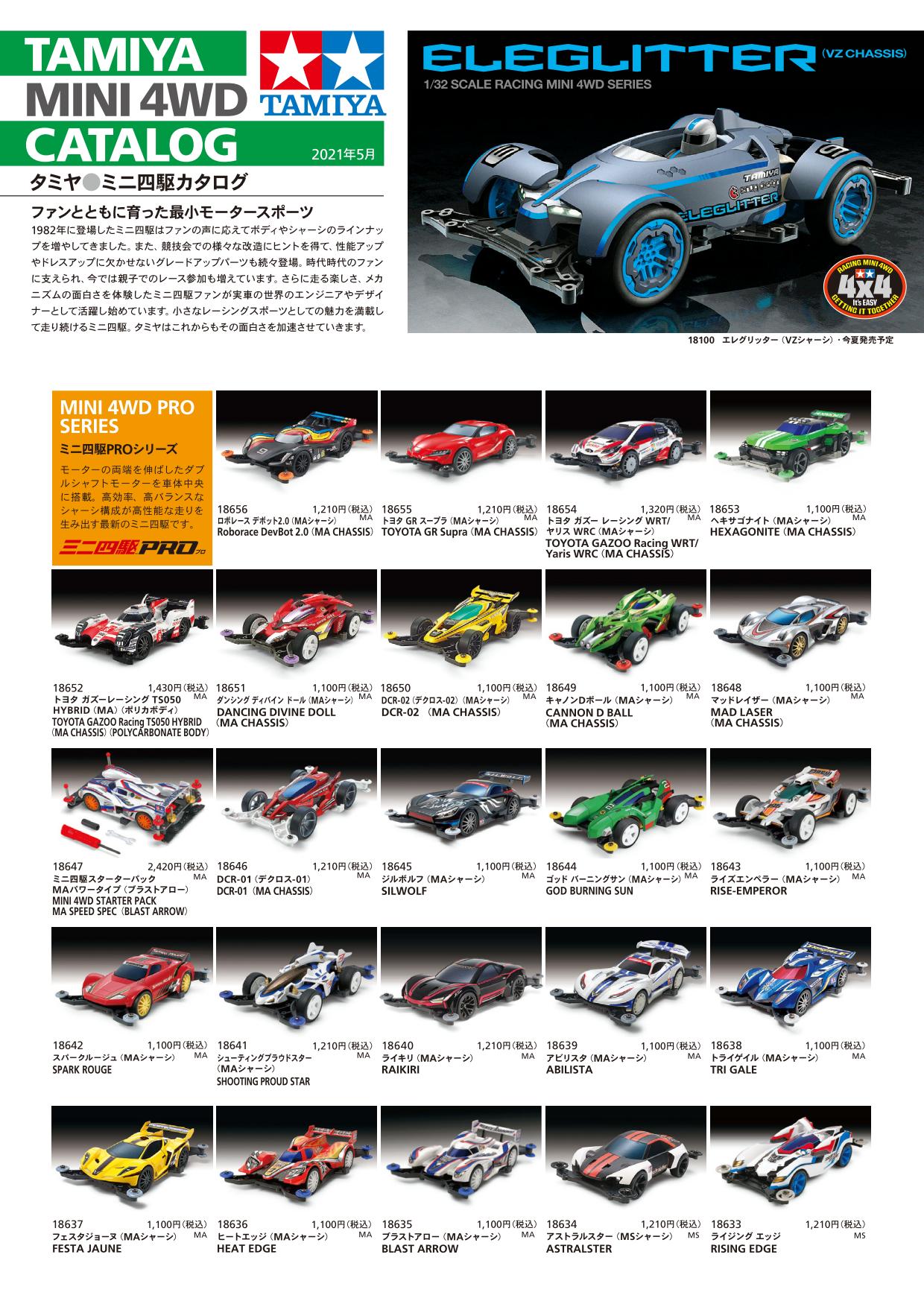 Click on the image to open/download the PDF catalogue 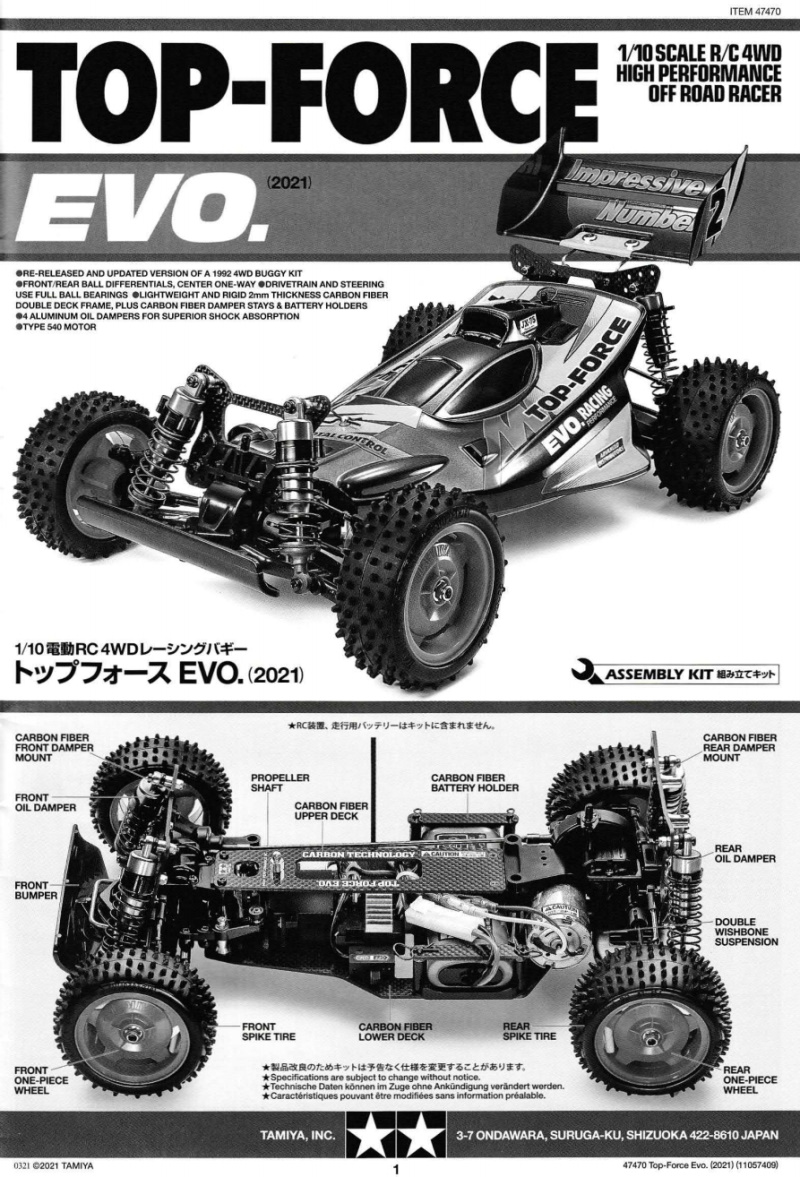 Click on the image to open/download the PDF manual