We, the TamiyaBlog team have always been big fans of the Japanese comic-inspired Tamiya dragon buggies. The Fire Dragon in particular is one of our favorites.
So the Super Storm Dragon is one for us too.
In the 1980s the Super Dragon was only a body set for the Hornet and Thunder Shot chassis.
Now the dragon is back as a complete kit on a classic Hornet chassis.
As with some of the new kits, the body is also pre-painted and only needs to be decaled.
As you have noticed, the name has also changed. Possibly because of licensing problems.
But Tamiya helps us here with the stickers. You can cut the “Storm” out of the sticker, and so you have a “Storm Dragon”. The number 18 stickers on the side from the original release are also included in the sticker sheet.

Building was a real joy. You feel like a kid again, building your first Tamiya Off Road Racer.
We have installed a classic black Sport Tuned motor, a complete set of ball bearings and classic aluminum rim covers in our Super Dragon for that special custom look.

We really love this car. It brings back so many great memories from the 1980s, the golden era of the Tamiya RC cars.
Enjoy the Super Dragon!
We are really looking forward to the comeback of the Tamiya Fire Dragon.

Many thanks to Dickie Tamiya and Tamico for providing us with the Super Dragon kit. 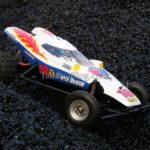 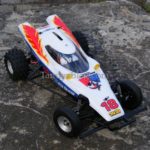 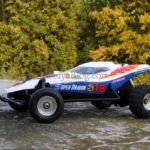 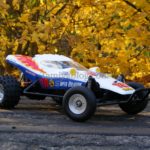 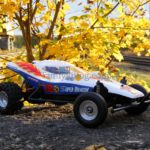 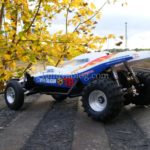 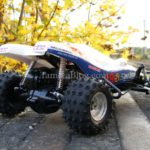 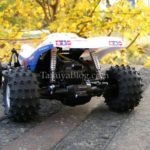 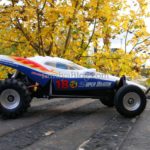 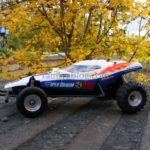 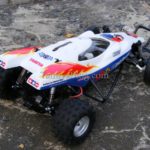 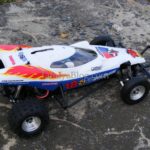 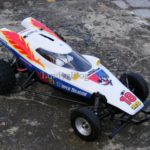 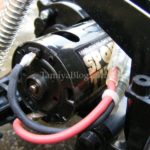 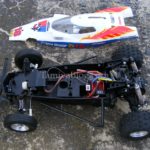 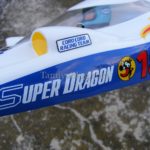 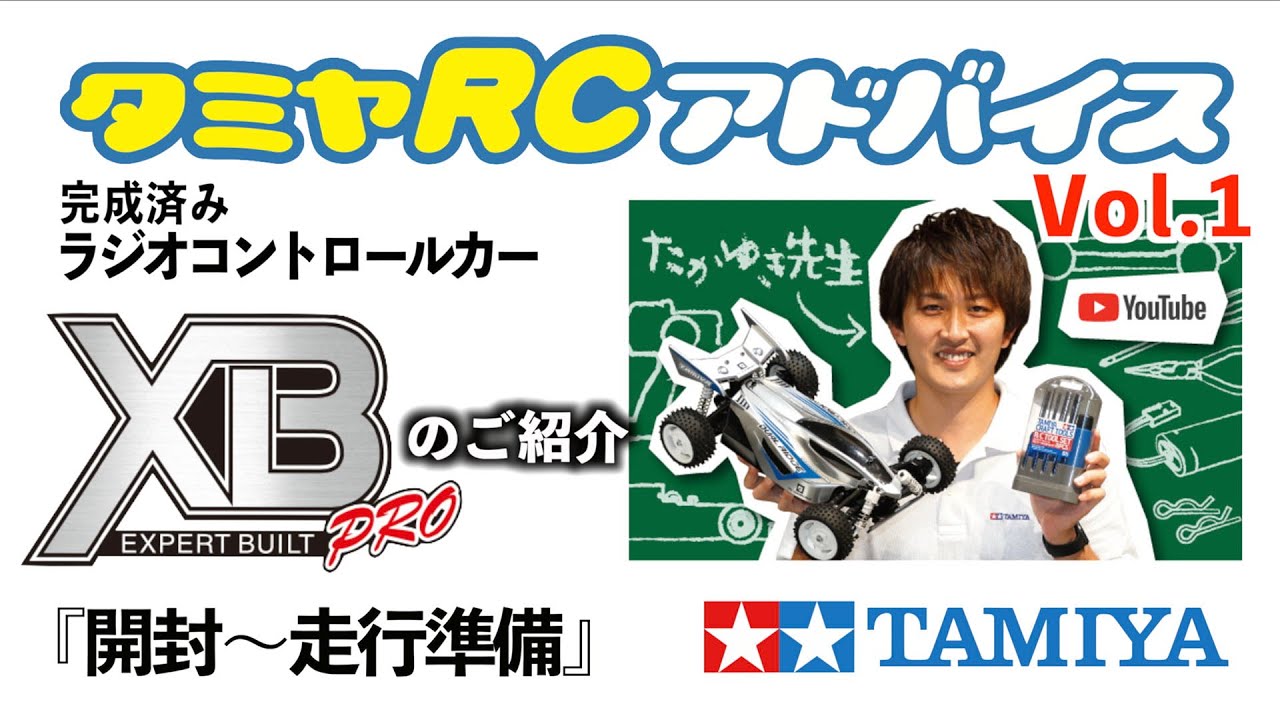 We will explain in detail the necessary tools and various manuals included in the package. 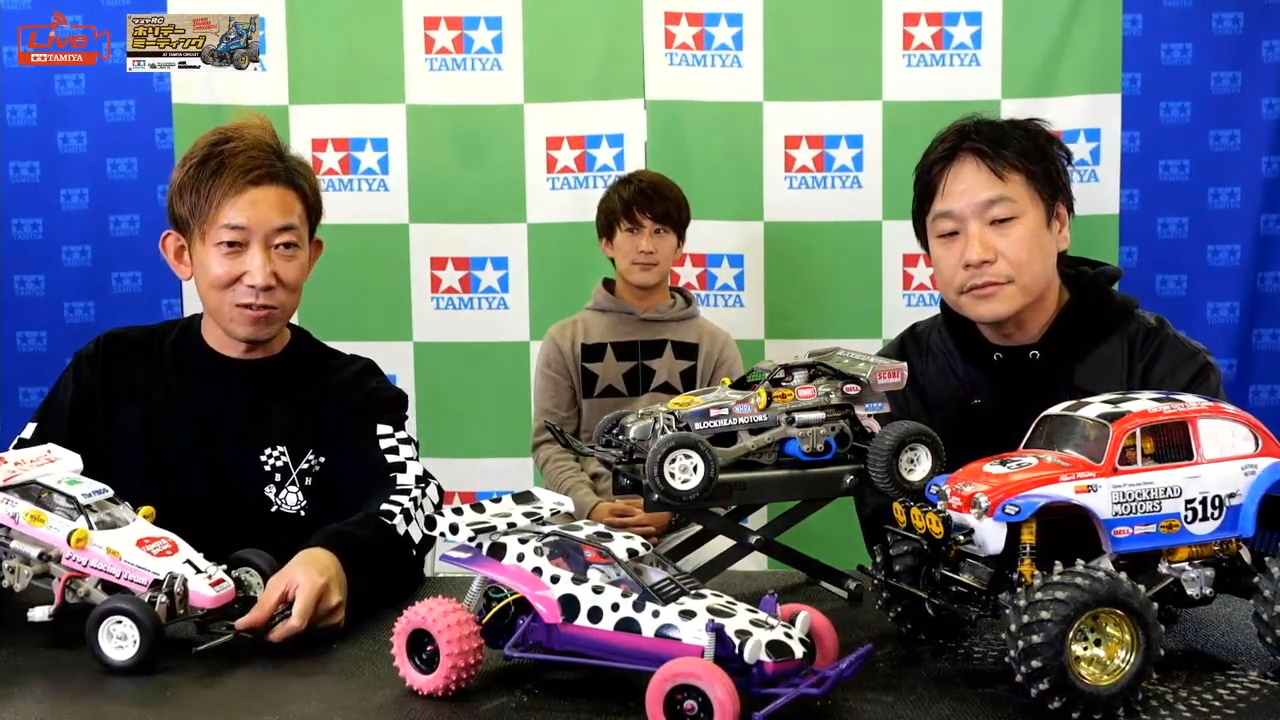 It started with the special issue of Tamiya News in June 1970, and this is the 80th time. This year, there were many applications for the 1/35 Soviet KV-1 1941, which was just released in June. In addition to its powerful style, it is also popular for its latest modeling and ease of making, but the barrel, which is not too long, fits well on the screen, resulting in a well-balanced photo. I was also happy to see that there were many applications for new products such as the French light tank R35, the German light tank 38 (t), and the German infantry set (mid-war). Mr. Shiba’s work in the gold medal in the scene photography category is a photograph that conveys the atmosphere of the battlefield with a novel composition that has never been seen before, but this also uses a new product. We stepped up every year from the Junior Award three years ago, and this time we won the Gold Award. There are 150 applicants from 8 to 79 years old. There were also participants from parents and children, as well as from overseas such as Hong Kong, China, and Australia. The deadline for applications for the click contest is September 1st every year. When the new product is completed, first click with the camera. Please take a picture of your masterpiece and apply.
⇒ How to apply for the click contest 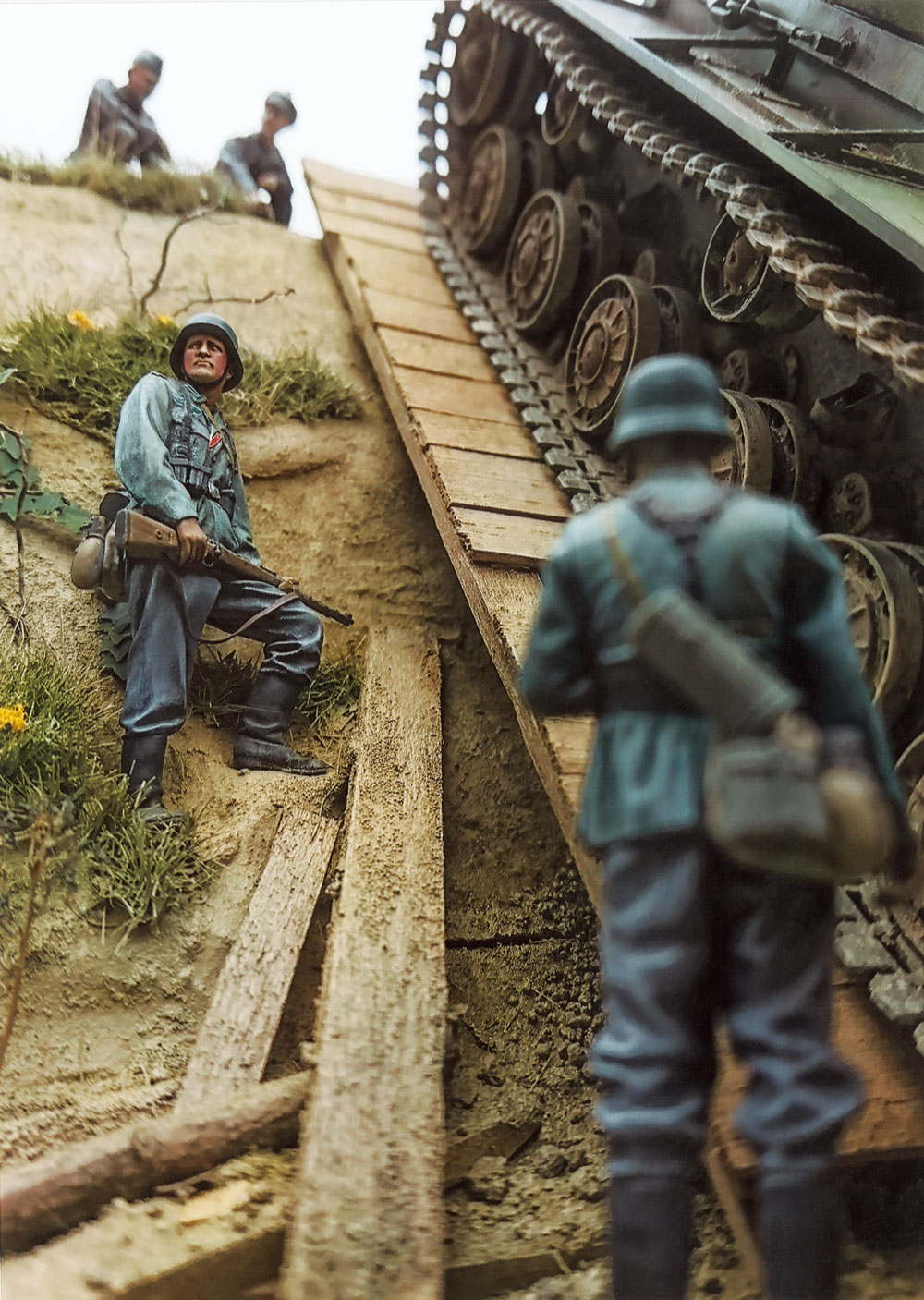 Gold medal
[Author] Hinata Shiba (18) Chiba [Title] Senior Soldier [Scale] 1/35
In this work, I made a diorama of the KV-1 that fell from the bridge and the German soldiers investigating it. The bridge is made of balsa wood, and the base with height difference is made of wood powder clay with styrofoam as the core, and pebbles and flowers are placed and painted. Soldiers add gun slings and helmet straps. I shaded it with an airbrush and then painted it with a brush. The shooting was done outdoors, taking advantage of natural light. 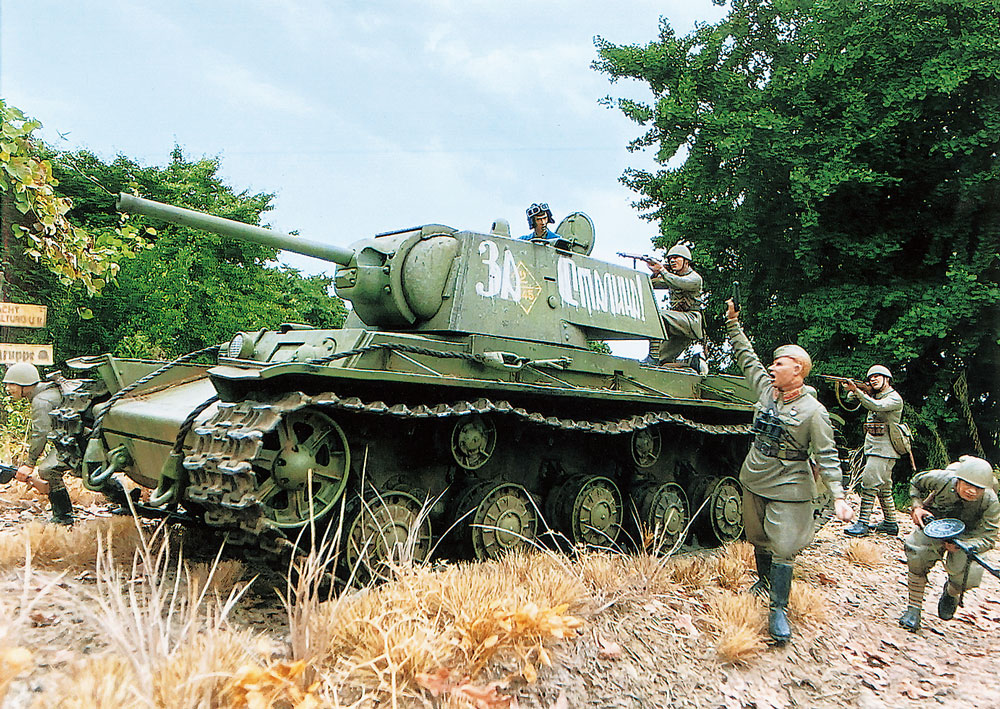 Silver Award
[Author] Shigehiro Yoshida (62) Aichi [Title] Assault KV-1 (1941) [Scale] 1/35
The work is an image of the assault scene during Operation Barbarossa in early autumn. I chose a figure with movement and tension and placed it under the line of sight of the tank soldier. For painting, prepare paints of the same color but different tones, and paint with the consciousness of fading on the side and top of the car body. The shooting was done under natural light with a diorama base set near the brown leaves. 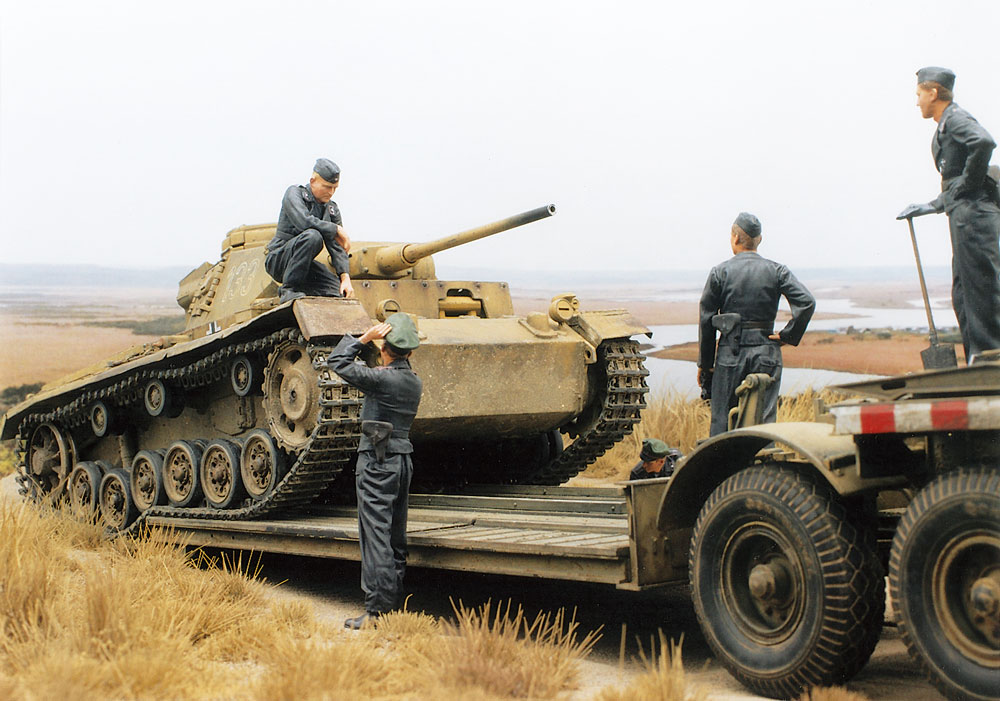 Silver Award
[Author] Tomoya Kawada (22) Yamanashi [Title] Tank transport training [Scale] 1/35
I made it by adding the setting that several tank soldiers are checking and observing the work procedure while referring to the material photos during the tank loading work. In the image of late autumn, the vehicle was painted in a single color of dark yellow, and the surrounding area was made of dead grass. The dead grass is ready-made or deer hair, and the ground is reproduced by sprinkling it with a sieve of real soil. I used a single-lens reflex camera and a macro lens for shooting. 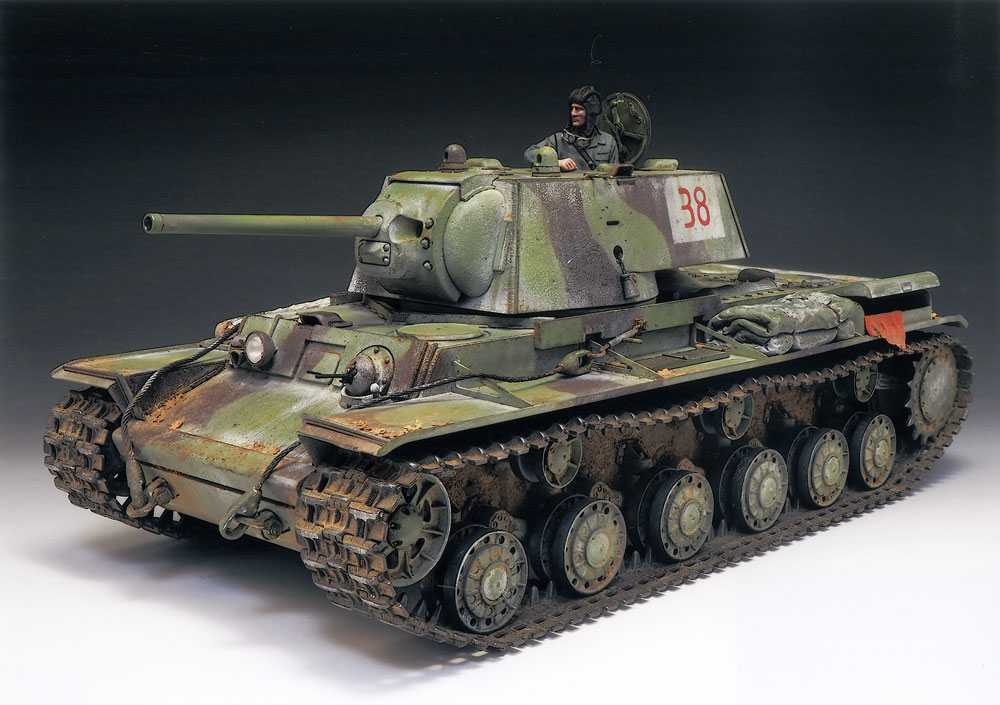 Gold medal
[Author] Yosuke Yamada (56) Hyogo [Title] RUSSIAN HEAVY TANK KV-1 [Scale] 1/35
Assembly is straight except for minor modifications (wire material change, fender damage processing, etc.). The painting is a two-color camouflage of green and brown, and the state where the white of the winter camouflage remains slightly is reproduced. At this time, we finished it while paying attention to the texture expression of the kit (armor surface, casting surface, welding marks, etc.) as much as possible. Also, as a color accent, I looked into the red cloth from the tool box at the rear of the car body. 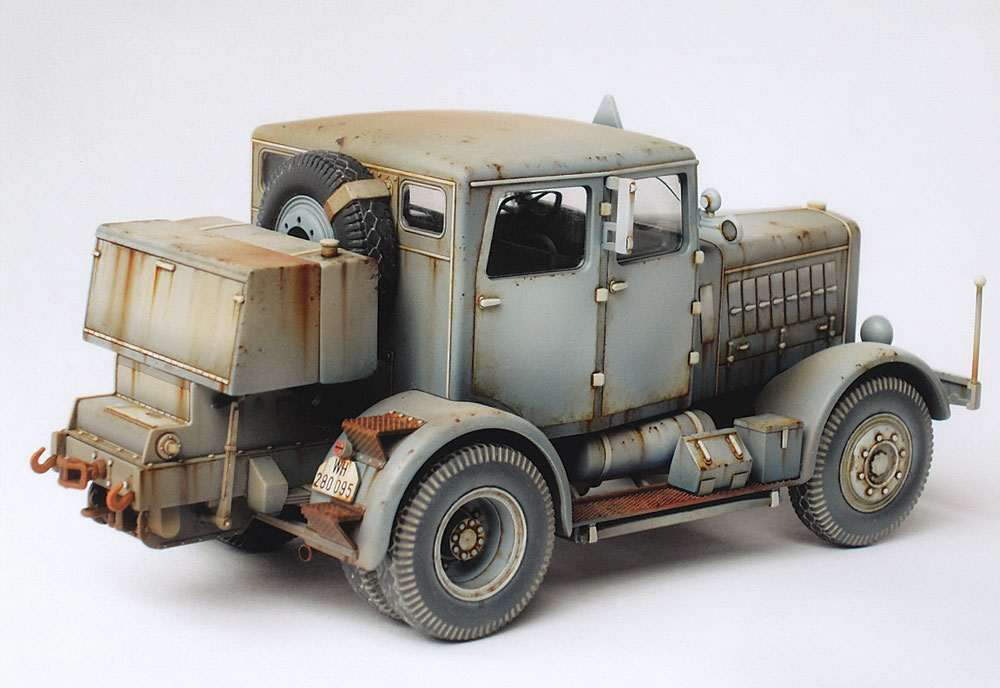 Silver Award
[Author] Koichi Hoshino (53) Gunma [Title] German Heavy Tow Vehicle SS-100 [Scale] 1/48
I wanted to express the worn-out appearance, so I filed only the ground contact surface of the tire to express the feeling that the rubber was worn out. As for painting, use an airbrush and brush to clear orange for rust that has emerged or flowed out. Clear blue is mixed with German gray that I made to give a three-dimensional effect to the car body, and it is sprayed on the shadows, and XF-57 is used for dirt around the suspension. 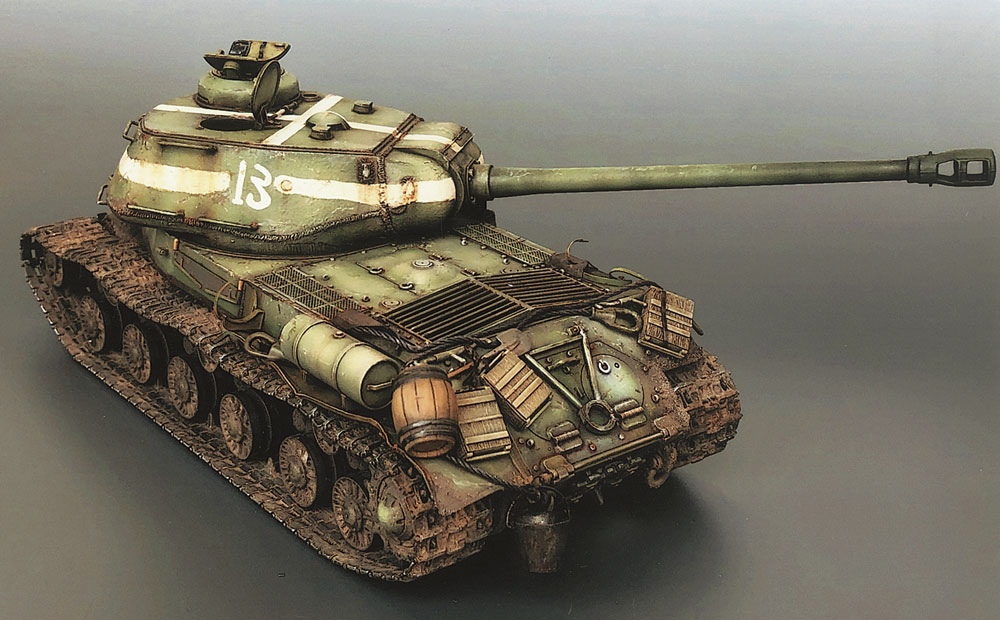 Silver Award
[Author] Kenichi Sanada (49) Fukuoka [Title] JS-2 1944 ChKZ [Scale] 1/35
I chose the JS-2 this time because I wanted to make a rugged Russian tank with a more vicious image. Even if you remove the fenders to expose the tracks or arrange the equipment outside the car in a cluttered manner, the effect is great, and I am satisfied that the work was as intended. In shooting, I tried to keep the overall balance by turning the barrel backwards. 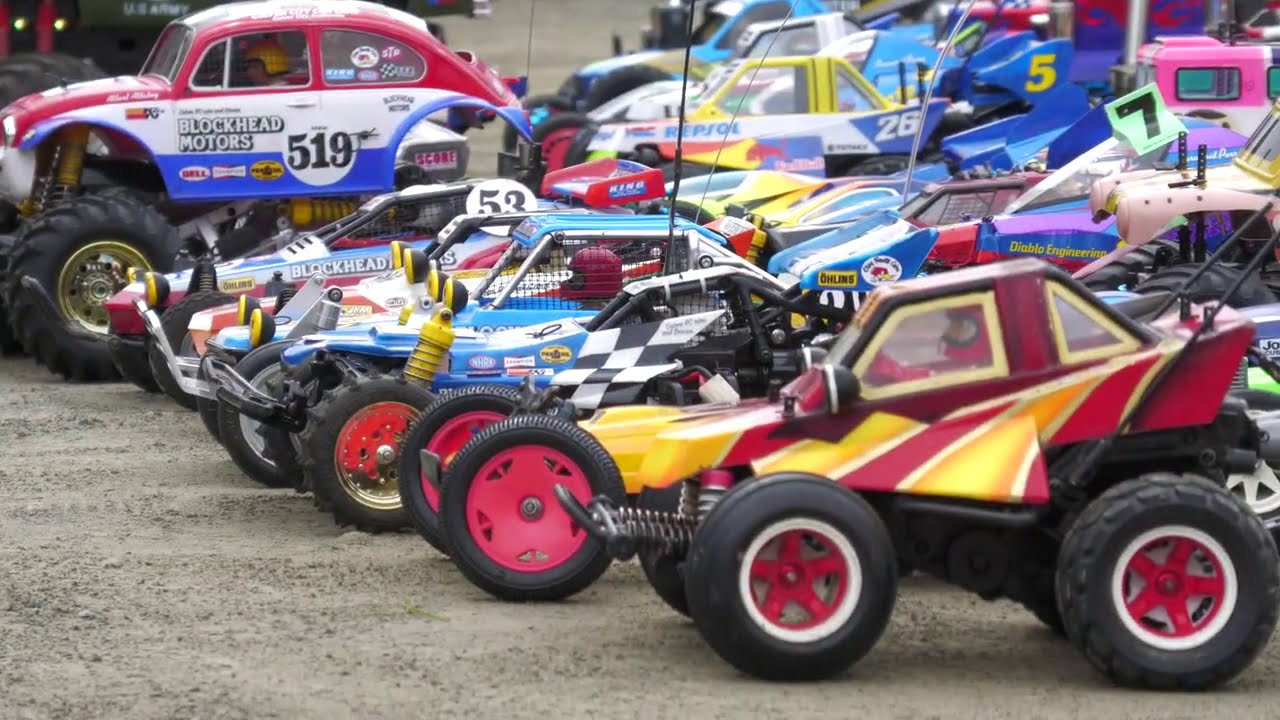 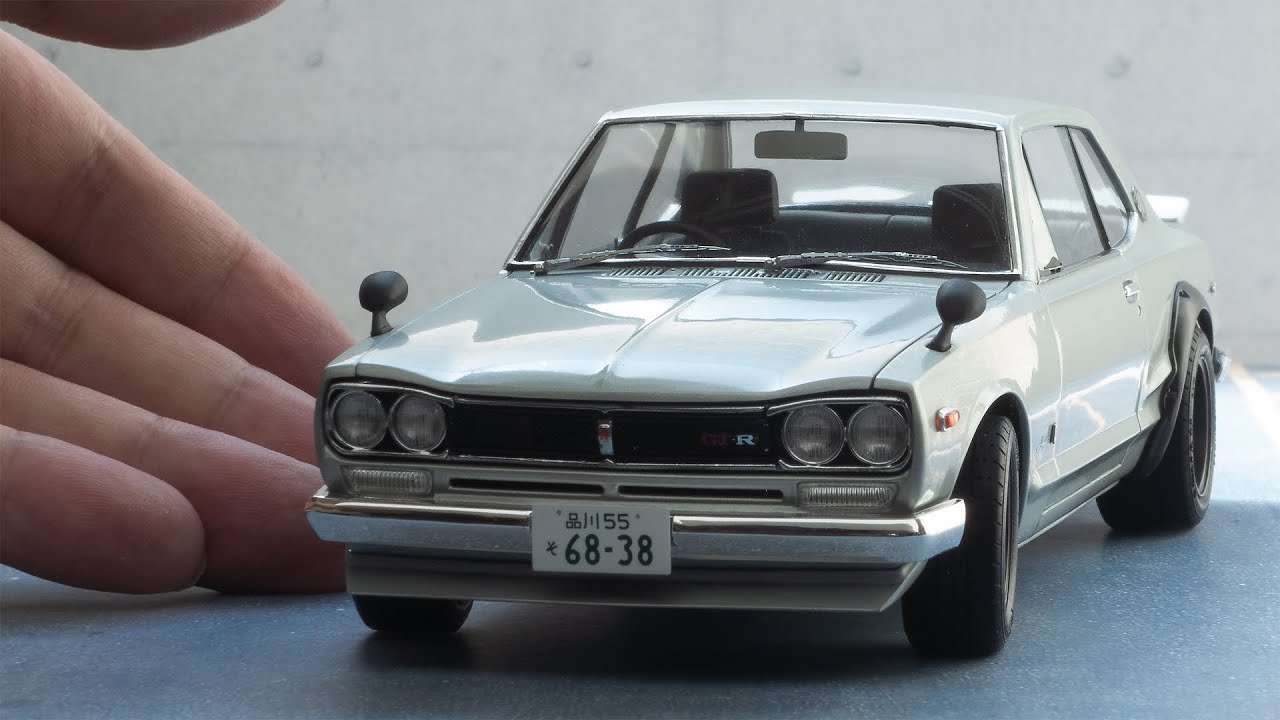 Tamiya 1/24 NISSAN Skyline 2000GT-R Make a street custom plastic model.
● The linkage of the Mikuni Solex carburetor can be moved in conjunction with the accelerator pedal.
● The door, bonnet, trunk, and fuel lid can be opened and closed (the bonnet was originally openable, but the hinges have been remade).
● The triangular window also opens and closes.
● The head light, tail light, and instrument panel illuminate.
● You can check (insert and remove) the oil level gauge.

* It is not a complete reproduction of the actual vehicle. Think of it as an original custom specification.

In addition, the headlight lens is newly built from UV resin, the wheel uses Fujimi’s wheel kit for the rear wheel, and the tire “ADVAN HF Type D” is used from the same kit. The seat belts are remade using ribbons, the floor mats are made from epoxy putty, and so on.
For the convenience of editing, a considerable part is cut. If you want to watch the video before cutting, or if you don’t know what you are doing, please take a look at the Skyline GT-R edition of the [Creator’s perspective] series.
Or, an article with detailed explanation will be posted on the site “Illustration! Anything Production Diary” soon.

Thank you for many comments and likes in the creator’s perspective series! I couldn’t reply to all of them, so I would like to take this opportunity to thank you. 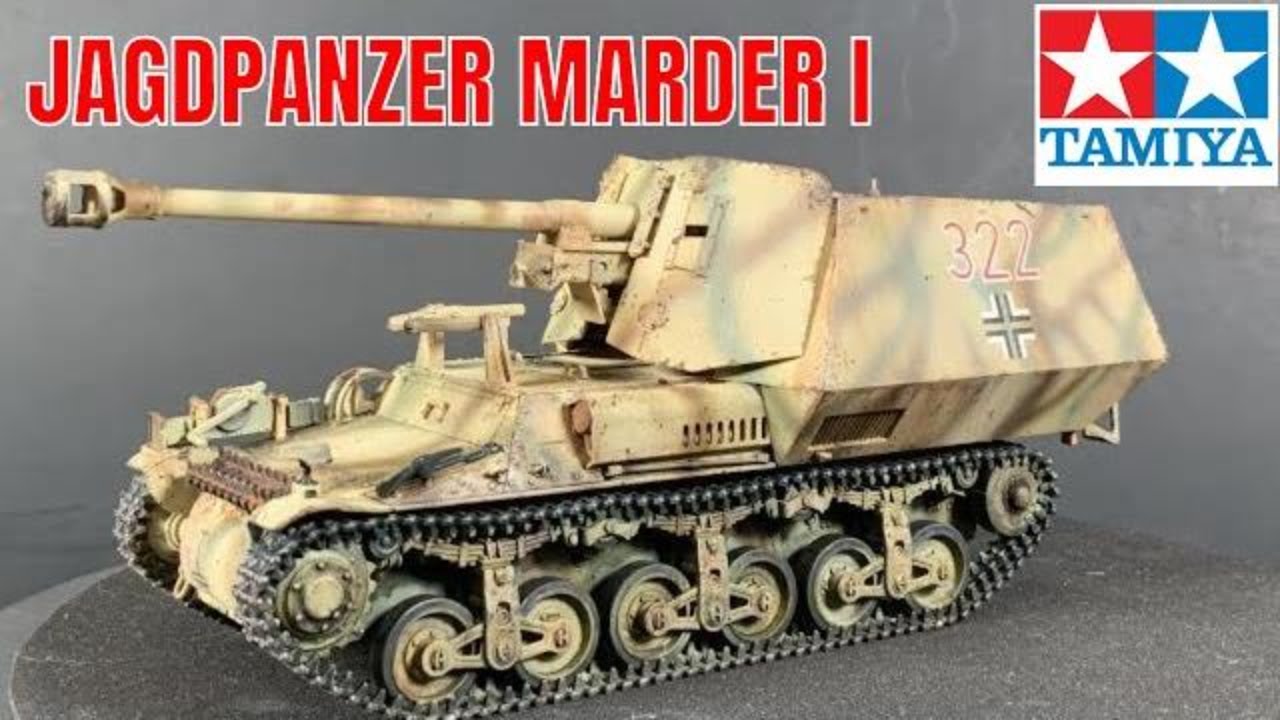 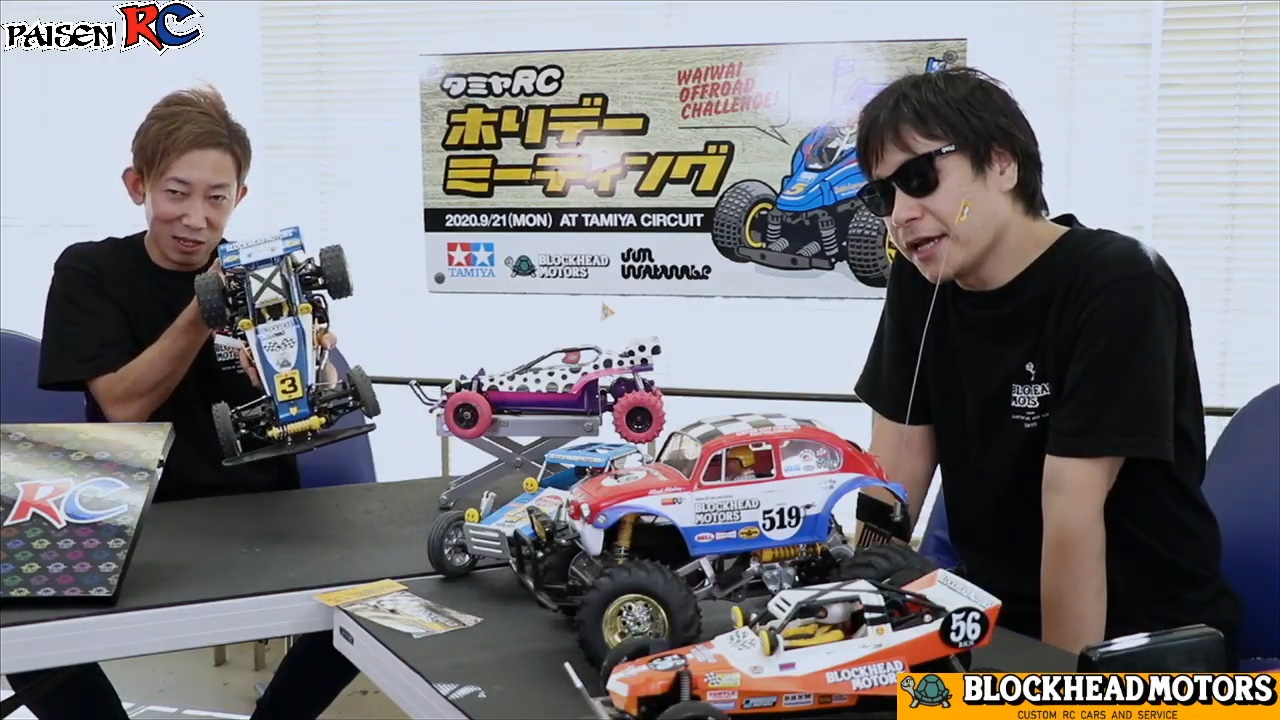 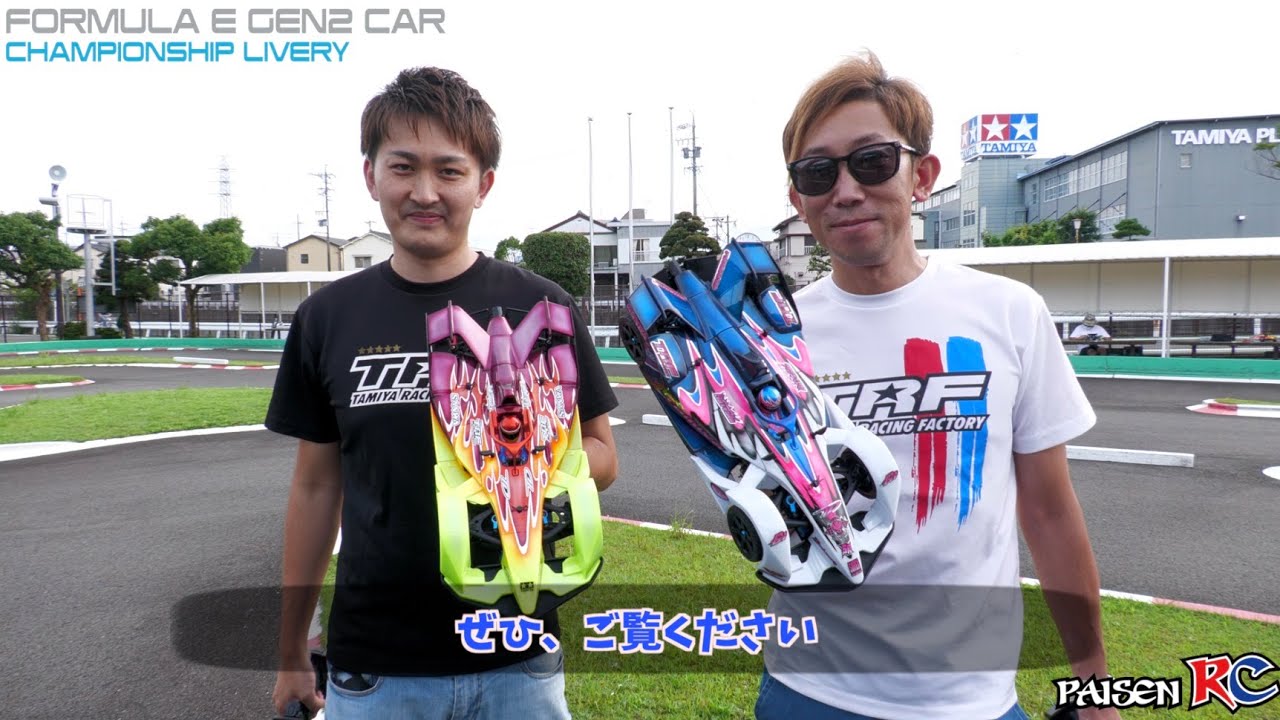 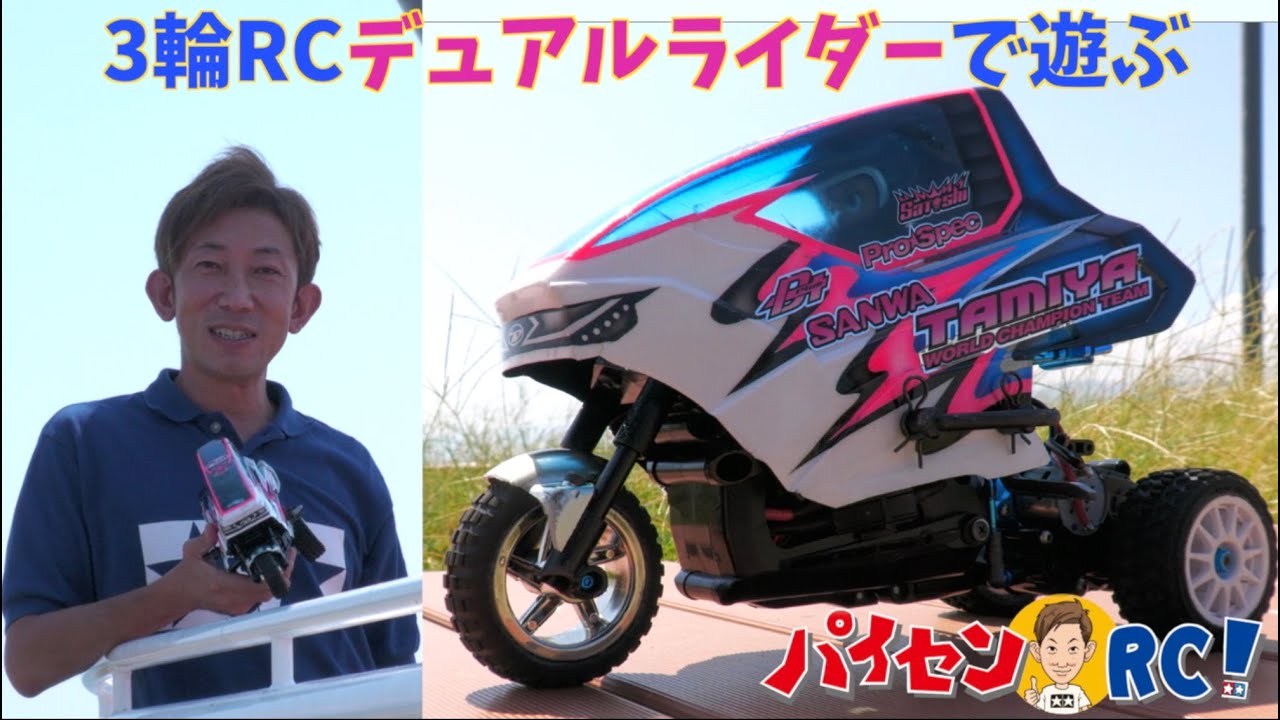