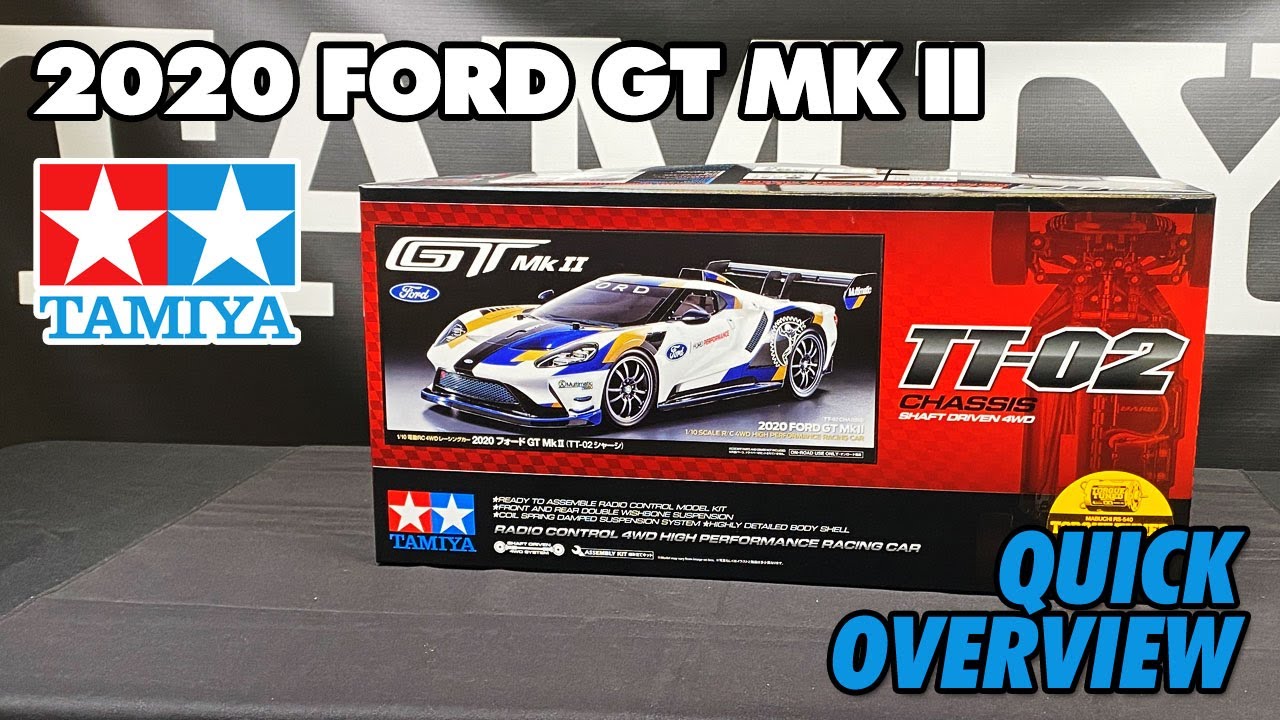 The 2020 Ford GT Mk II is an amazing machine modeled after the legendary 1966 GT40 MKII. Only 45 of the hand-built rides will be produced, making them a very sought after vehicle.
In this video, we take a look at what comes in our 2020 kit. We also discuss the features of the body, the wing sets, what cars the new GT body will fit and a little more about the new TBLE-04S ESC that comes standard in this kit.
Source: Tamiya USA 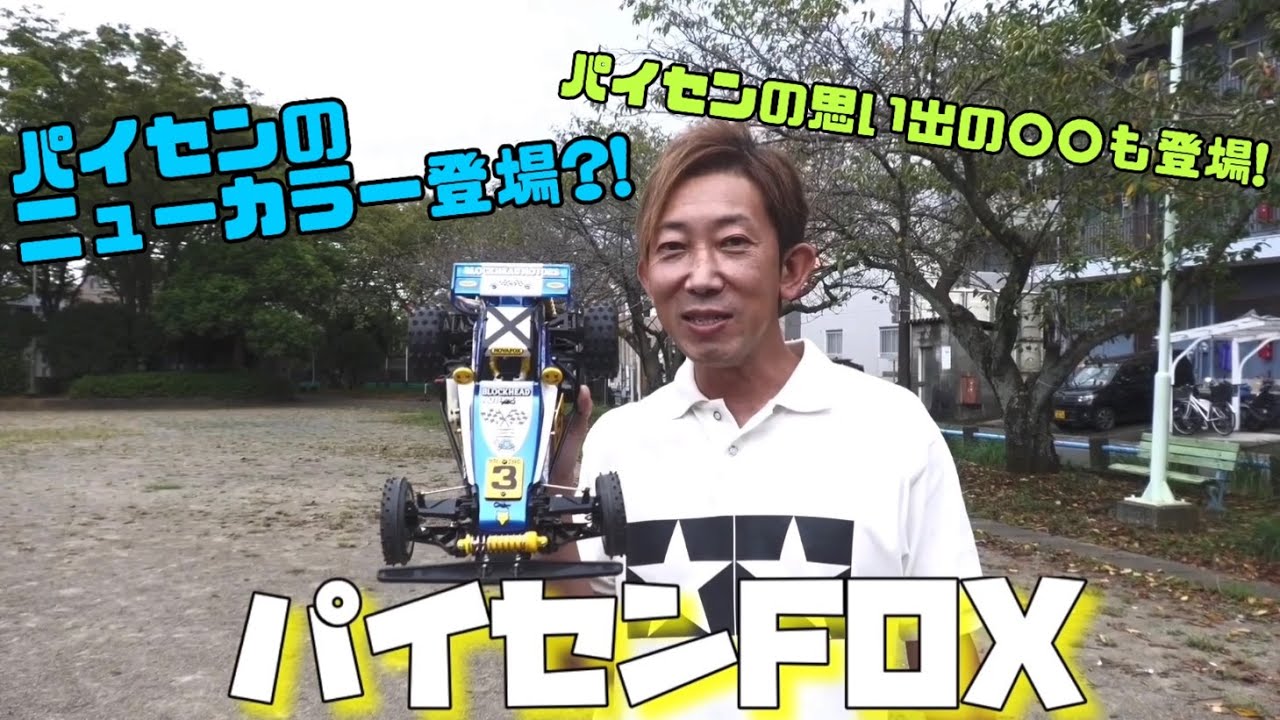 This time it is a running video of FOX!
Designed by JUN WATANABE of BLOCKHEAD MOTORS ☆ ★
Souce: イセンRC (Paisen RC) YouTube channel

Shizuoka City, which has a concentration of manufacturers such as Tamiya and Bandai Spirits and has an 80% share of the domestic shipment value of plastic models, announced on the 12th that it will install “plastic model monuments” in three locations in the city. It is said that an unveiling ceremony will be held in front of JR Shizuoka Station on the 19th.

The monument, which is about 2 meters high and is made of stainless steel, has the image of a “plastic model before assembly”. It is easy to take a commemorative photo, and the aim was to let tourists and foreigners know at a glance what Shizuoka is like. The Shizuoka Model Teaching Material Cooperative (Chairman, Shunsaku Tamiya, Chairman of Tamiya) also cooperated in the design.

The monuments located at Twin Messe Shizuoka in Suruga Ward and the south exit of JR Shizuoka Station, where the largest model exhibition in Japan, “Shizuoka Hobby Show,” will be held, will feature the characters “Model World Capital” and the city emblem of Shizuoka City. It was. In front of the station, an illustration drawn by Eiji Shimamura, who is known for the design of the plastic model box, is also attached. In front of the main building of the city hall, with the cooperation of Japan Post, the posts that can actually be used are expressed in the “before assembly” state.

In the future, he wants to cooperate with private companies to increase the number of plastic monuments that express products and corporate images. Mayor Nobuhiro Tanabe said at a press conference, “It’s better to have more monuments. I hope the company will have a win-win relationship that will attract customers.” 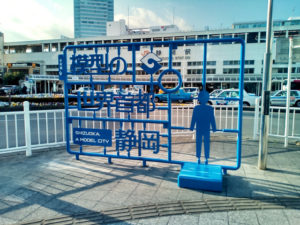 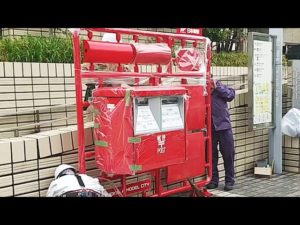 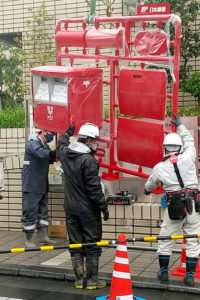 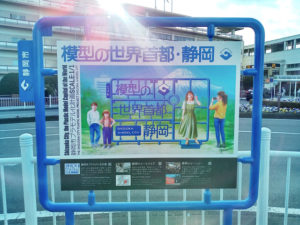 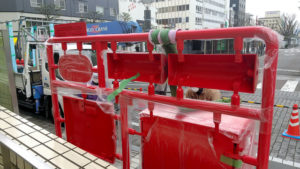 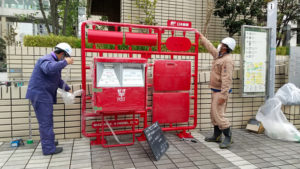 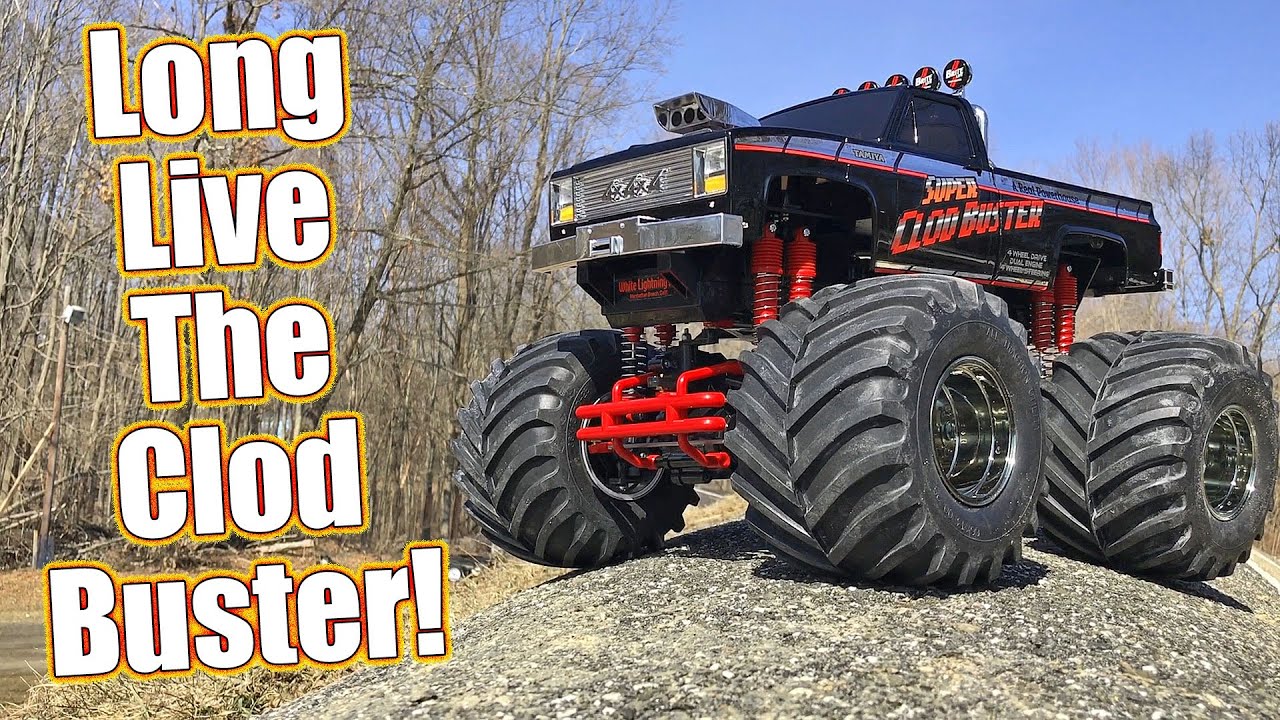 If you walk up to a random person on the street and ask if they know anyone with an RC car and what is it, there is a good chance they will say: I know someone with a Tamiya Clod Buster. The Tamiy a ClodBuster is a true icon in the RC hobby. It has been around for decades and continues to make hobbyists today excited to own one. Greg is exactly that, he’s beyond excited to have a Clod Buster back in his RC collection and the version he got his hands on is the Super Clod Buster Black Edition. This video won’t be the typical review video, but more of just talking about the Clod and what it means to Greg, what he thinks it means to hobbyists and why it’s as popular as it is. Of course we’ll show you details of the truck and even lots of action. We know you want to see it running! The Clod Buster is a true RC classic, we hope you have fun watching our fun with the truck.
Source: RC Driver YouTube channel 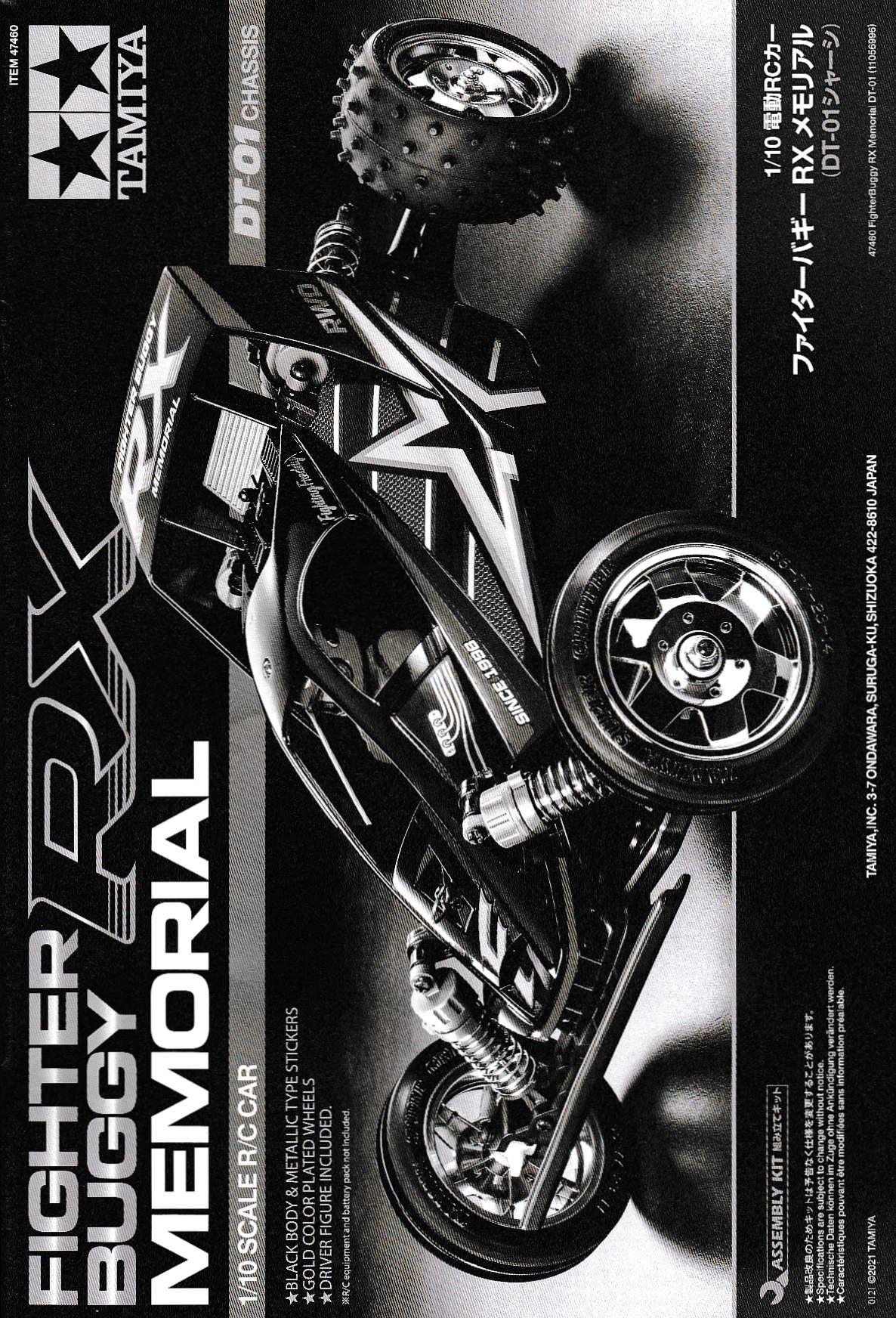 Tamiya was deeply saddened to hear of the passing of Yasuo Ohtsuka, the legendary animator. Otsuka-san had worked on the design of early Tamiya R/C cars and Mini 4WD, as well as military model figures. He is an integral part of our history and will be sorely missed, although we hope that he continues to watch over the model industry he so generously supported. Our thoughts and condolences are with his family and loved ones. 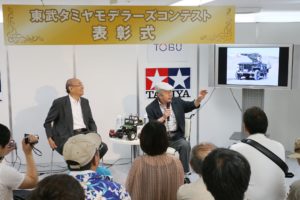 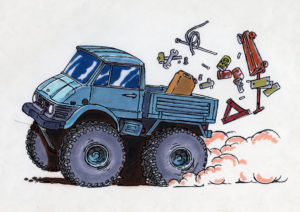 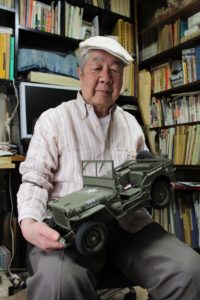 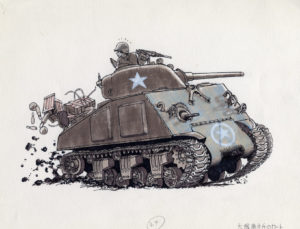 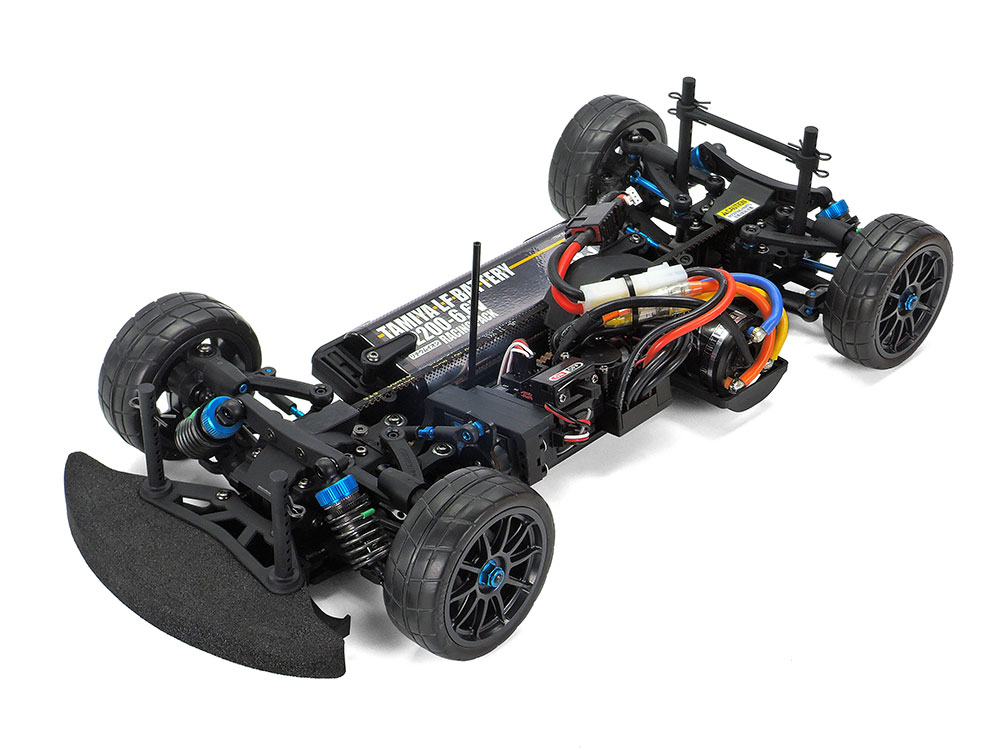 Speedy and controllable 2 belt-driven 4WD chassis in TA series!
It has been five years since the last time new number chassis in the TA 4WD R/C touring car series. The slim TA08 PRO Chassis Kit eliminates the need for an upper deck, which balances weight and rigidity. Its layout features the motor in near identical position to the TRF420, with the spur gear in front of the motor. Newly designed upper & lower arms make effective use of tire grip, equipped with laid down SSBB (Super Short Big Bore) dampers. This kit was based on Tamiya’s extensive know-how built up through our traditional chassis series and data from racing, and offers plenty of potential for tuning. 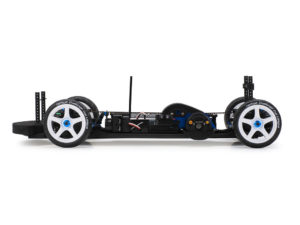 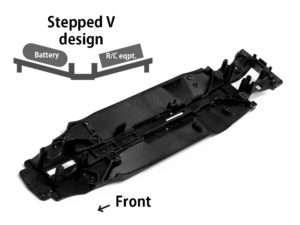 ★Stepped-V chassis molded in carbon fiber-reinforced resin facilitates rigidity even without an upper deck. The front end of the rear suspension shafts are mounted directly onto the chassis. 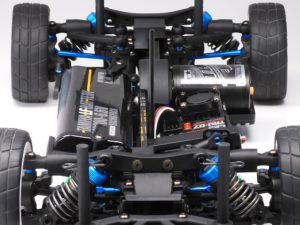 ★Angled battery and R/C equipment give optimum weight distribution, and a compact, grippy chassis, even on low-grip surfaces. 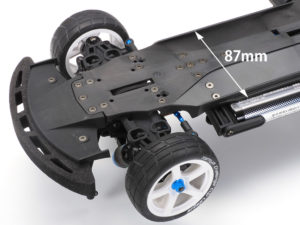 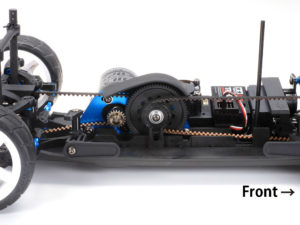 ★With spur gear ahead of motor, the chassis gives a stable drive, and belts are closer in length to facilitate minimal drive loss. 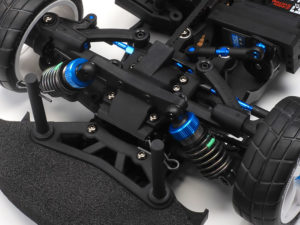 ★Ball connected A-★Hanging suspension mounts firm up the rear for more grip and stability, and facilitate toe control* for smooth cornering. *As the suspension compresses though corners, toe-in range changes and provides a traction boost.arms are identical front and rear, and produce more potential tire load, for good grip even on slipperier surfaces. 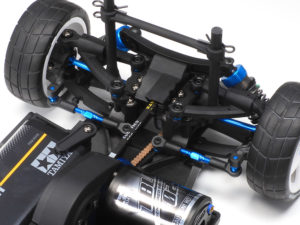 ★Hanging suspension mounts firm up the rear for more grip and stability, and facilitate toe control* for smooth cornering. *As the suspension compresses though corners, toe-in range changes and provides a traction boost. 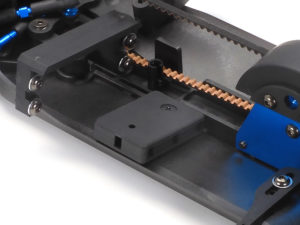 ★The chassis is equipped with a compact cable case to keep cables securely and safely out of the way. 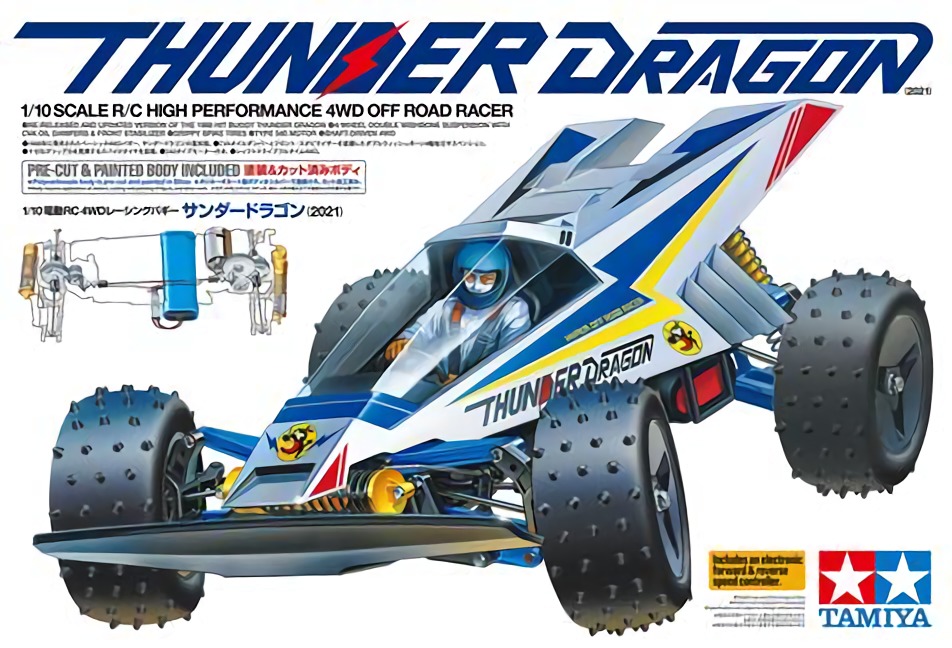