New release of 3 new products that are in development. The new Fairlady Z that attracts attention has already appeared in the 1/24 sports car series. The latest RC model of the TB Evo series “TB EVO.8” and “Egress Black Edition” will appear.
We will inform you as soon as the product release date and detailed information are decided. 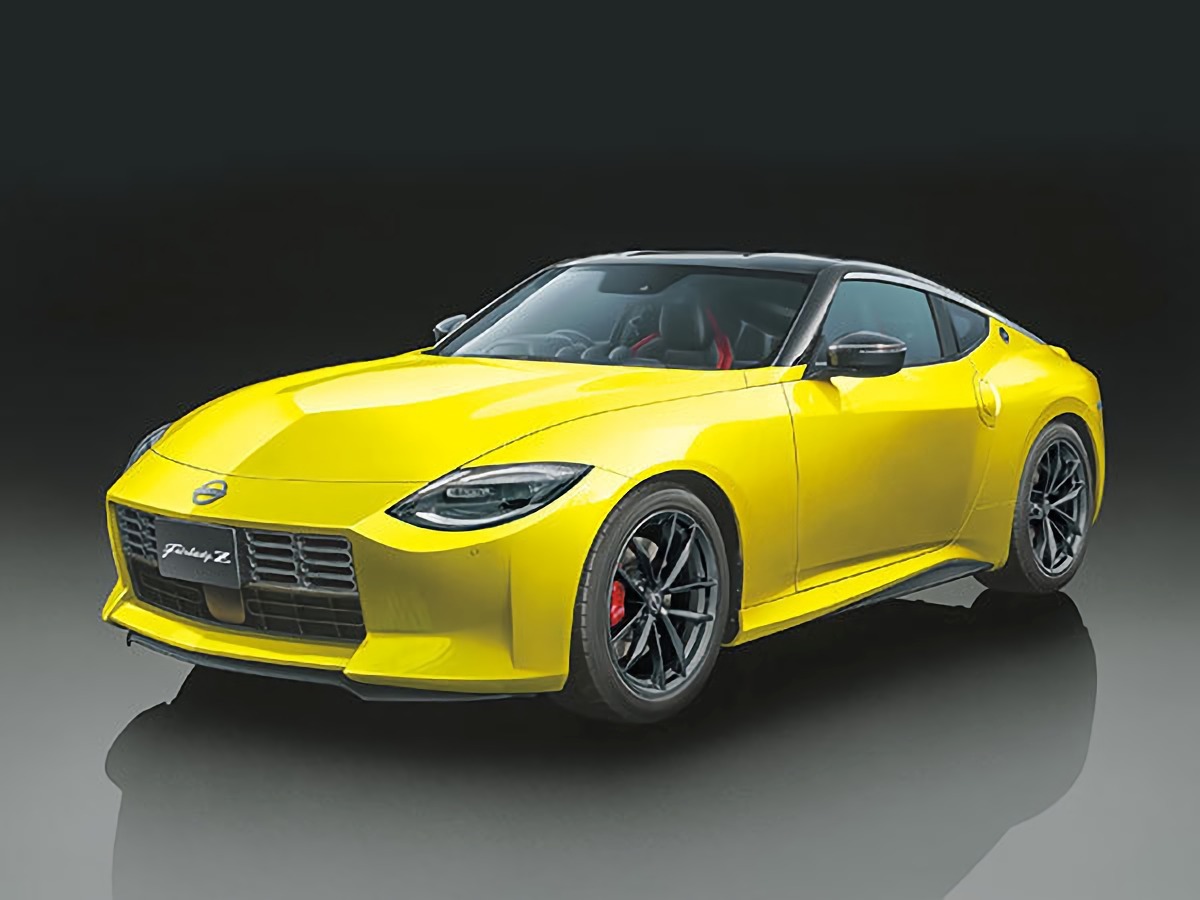 24363 1/24 NISSAN FAIRLADY Z (RZ34)
Nissan’s sports car, Fairlady Z, whose North American specification was announced in August 2021 and Japanese specification in January 2022. The 7th generation features a design that pays homage to successive models with the main theme of “fusion of tradition and state-of-the-art technology”. Equipped with a 405-horsepower 3-liter V6 twin-turbo engine at the front, it combines a 6-speed MT or 9-speed AT transmission to drive the rear wheels. As a pure engine model, it attracted the attention of fans around the world.
《About the model》
★1/24 scale plastic model assembly kit. Length 183mm, Width 84mm, Height 55mm. ★The sharp form of the 2-door fastback coupe has been faithfully reproduced. The outer panel of the body and roof is composed of separate parts. ★Separate parts such as the lower part of the transmission and front and rear suspension arms give the underside of the chassis a three-dimensional finish. ★The seat is divided into 4 sections for ease of painting. ★Comes with masking stickers for coloring transparent parts. ★You can choose to assemble either Japanese or North American specifications. ★Emblems and logos are recreated with inlet marks. ★Tires are made of solid rubber.
Under supervision of Nissan Motor Co., Ltd. 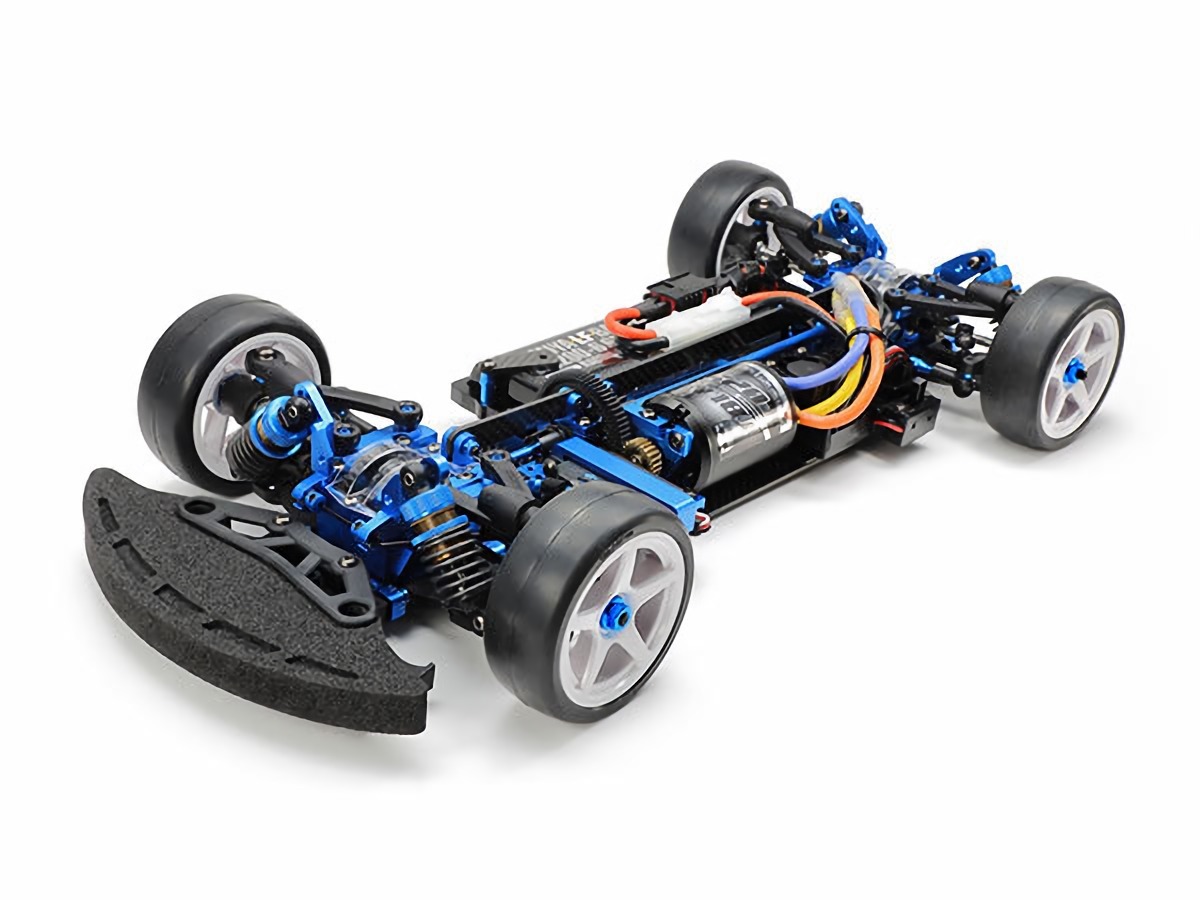 42383 1/10 R/C 4WD RACING CAR CHASSIS KIT TB EVO.8
The latest in the TB Evo series that has continued since 2000. The chassis layout that was popular with EVO.7 has been brushed up. The suspension adopts the A-arm type popular with TA08 and appears as an aggressive vehicle.
《About the model》
●Motor mounting position can be selected from 2 locations (front mid/rear mid). ●Optimum pitching rigidity is ensured by combining the carbon lower deck with the smallest upper deck. ●The damper stay extending from the bulkhead is an aluminum integrated type. ●The kingpin ball is integrated with the flange pipe to minimize suspension clearance and achieve high maneuverability. -Equipped with SSBB (Super Short Big Bore) damper for A arm suspension. ●The steering wiper is attached to the bulkhead like EVO.7 to reduce the impact on the chassis roll. ●The drive system uses a combination of a direct shaft and WO universal drive shaft on the front, and a gear differential and aluminum drive shaft on the rear. ●A carbon mechanical plate that can be attached to the aluminum center stiffener is used to equalize the left and right balance of the main chassis. 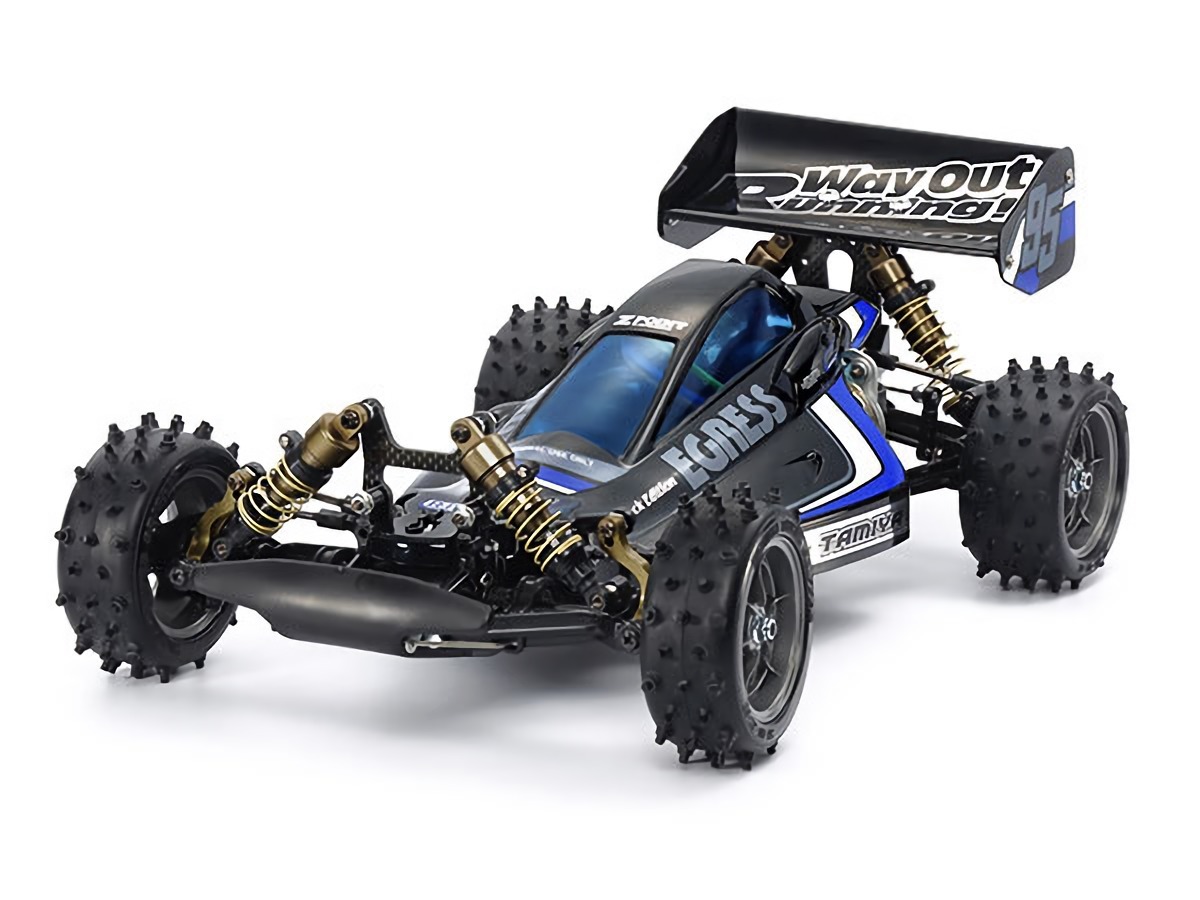 47489 1/10 RC EGRESS BLACK EDITION
This is the black edition of the Egress that debuted as a high-end Avante model with the aim of competing in world races. The black tone body, new coloring stickers, dark titanium alumite dampers and uprights further enhance the original Egress luxury. The package is also a special specification based on black similar to “47390 Avante (2011) Black Special”.
《About the model》
●The body (0.7mm thick) and wing under guard (1.0mm thick) are made of polycarbonate. -Changed the coloring of the body and wings to black, and changed the sticker to a new coloring accordingly. ●The alumite color of the front/rear dampers and front uprights has been changed to dark titanium to match the body color. The molding color of the wheels has also been changed to silver to coordinate with the body color. ●Motor sold separately.