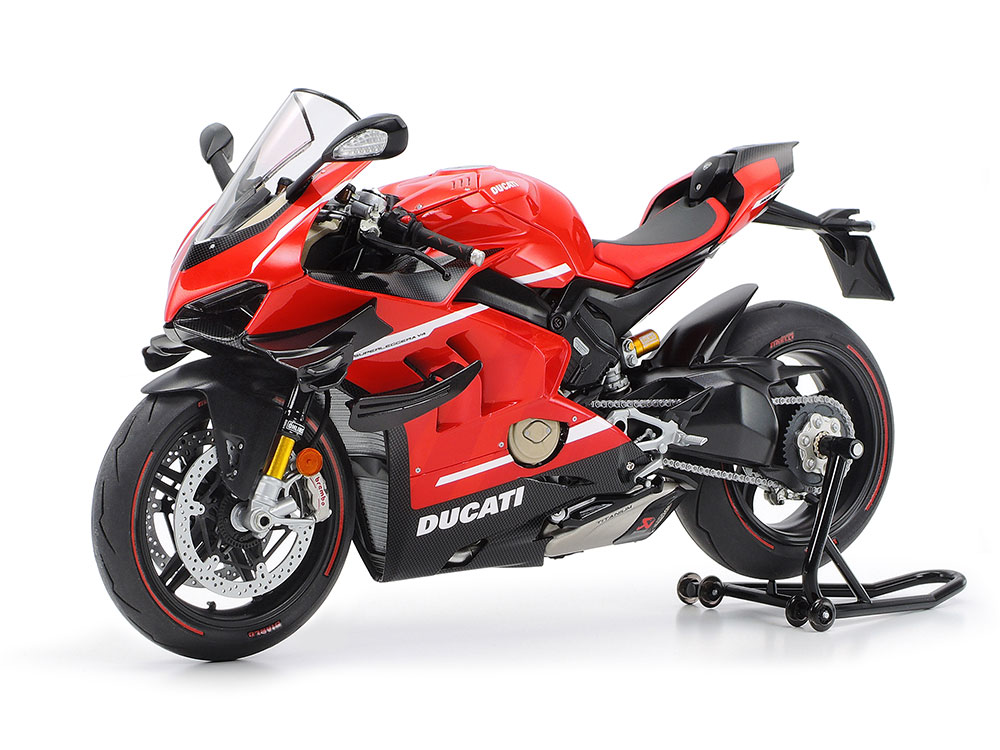 The Superleggera V4 was announced in February 2020 as the best road-legal model in Ducati history. Thorough pursuit of weight reduction based on the company’s super sports, Panigale V4. Starting with the cowl, the frame, swingarm, and wheels are also made of carbon. The engine is a 998cc V-type 4-cylinder that uses the “Desmodromic valve timing system”. A maximum output of 234 horsepower is demonstrated by installing an Akrapovic exhaust for the circuit. In addition, the carbon aerodynamic parts “biplane wing” attached to the front cowl, which is also a style feature, generates 50kg of downforce at 270km/h. It is a premium bike limited to 500 units in the world, assembled by skilled craftsmen with the most of Ducati’s technology.

About the model
★Length: 176mm, Width: 67mm, Height: 98mm. ★V-type 4-cylinder engine, swing arm, front fork, side cowl, and fuel tank are attached to the frame with screws. ★The 4 wings attached to the front cowl, the seat cowl with tunnel-shaped openings on the left and right sides, and the silencer integrated with the under cowl shape are realistically reproduced. ★The chain is divided into left and right parts, and even the rollers are sculpted. Increases precision around the rear. ★Inlet marks are used on the side mirrors. ★Slide markings are available for the side cowl’s red gradation pattern and carbon material. ★Tires are made of synthetic rubber with a textured tread pattern. I also set the tire mark of Pirelli. 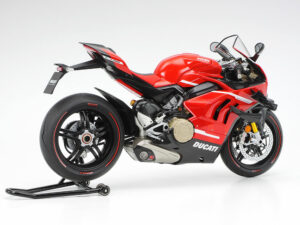 A light rear view reminiscent of a racer with a cantilevered swing arm. 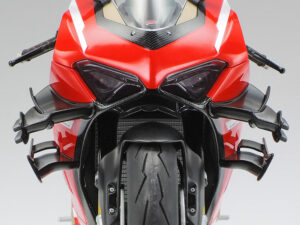 Faithfully reproduces the complex shape of the four “biplane wings” with the motif of the Moto GP machine. 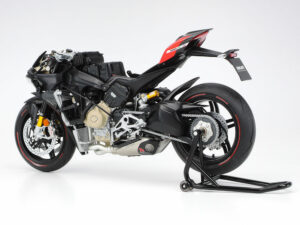 The cowl and tank cover can be removed even after completion. 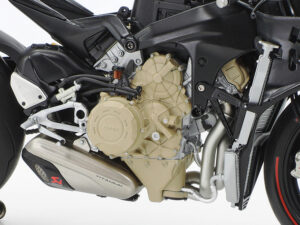 The 998cc V-type 4-cylinder engine and fuel tank are fixed to the frame with screws. 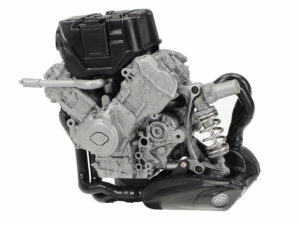 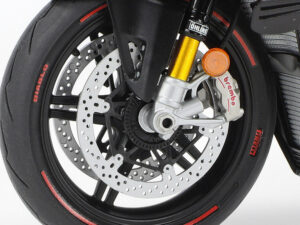 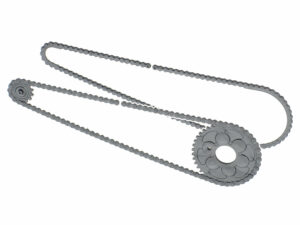 The chain reproduces a three-dimensional shape as a left and right split type. (The image is unpainted) 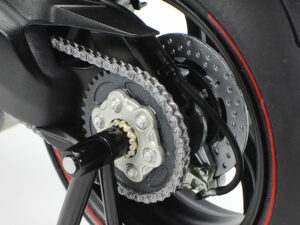 The three-dimensional effect of the roller part of the chain and the rear brake rotor with drill holes enhance the sense of precision. 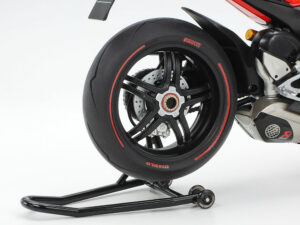 Tires are made of textured synthetic rubber with engraved tread patterns. A racing stand is included. 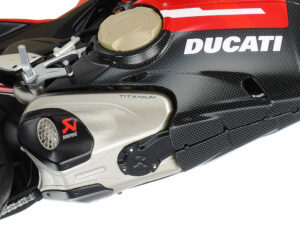 Silencer integrated with under cowl shape. Prepare a carbon decal that matches the cowl shape. 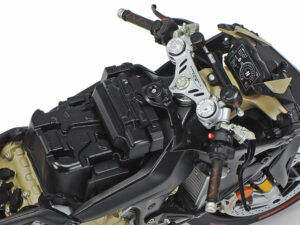 The steering damper, air box at the top of the engine, and battery are also reproduced. 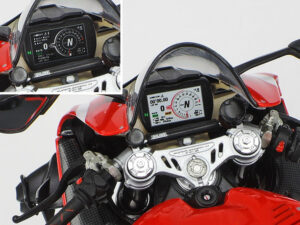 For the display screen, you can choose a street (upper left) / race mode (right) decal. 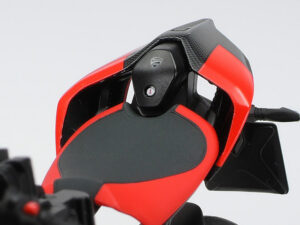 A seat cowl with tunnel-shaped openings on the left and right. 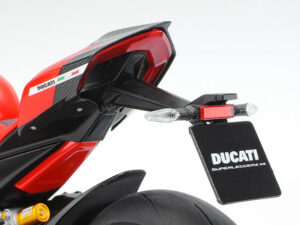 Clear parts are used for front and rear lights and blinkers. 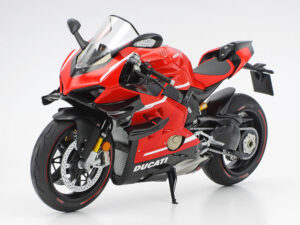 It can also be displayed with a foldable side stand. 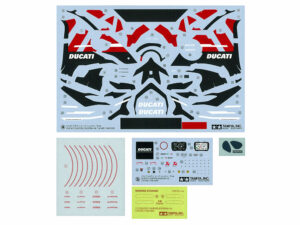 Decals that reproduce the red gradation pattern of the side cowl, tire marks, mask stickers, and inlet marks are available. 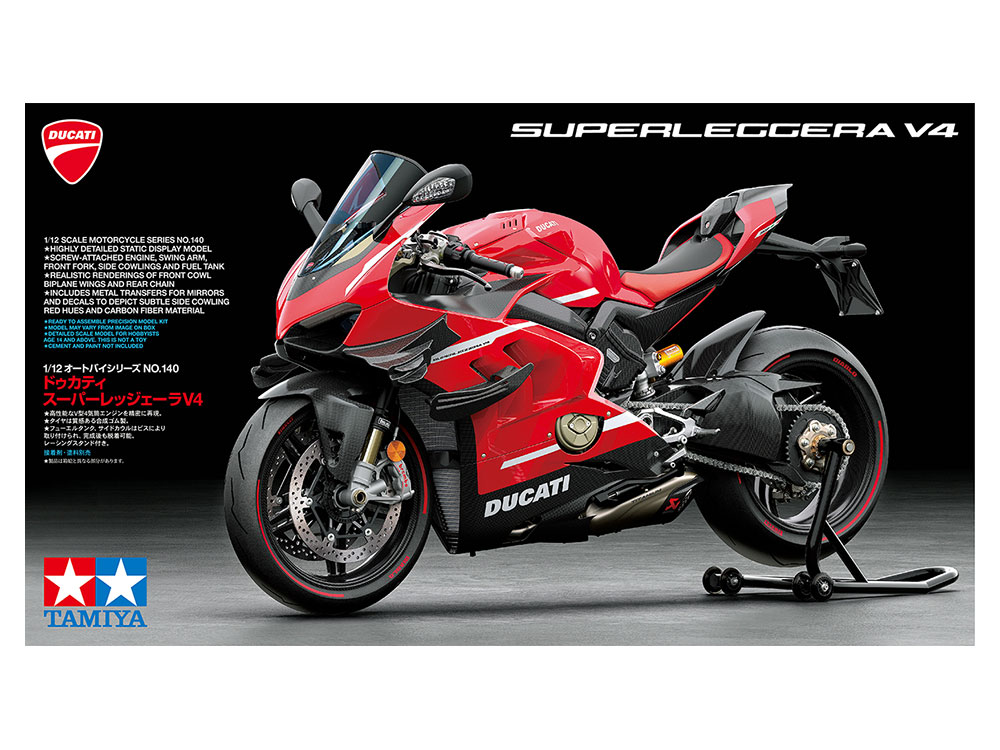