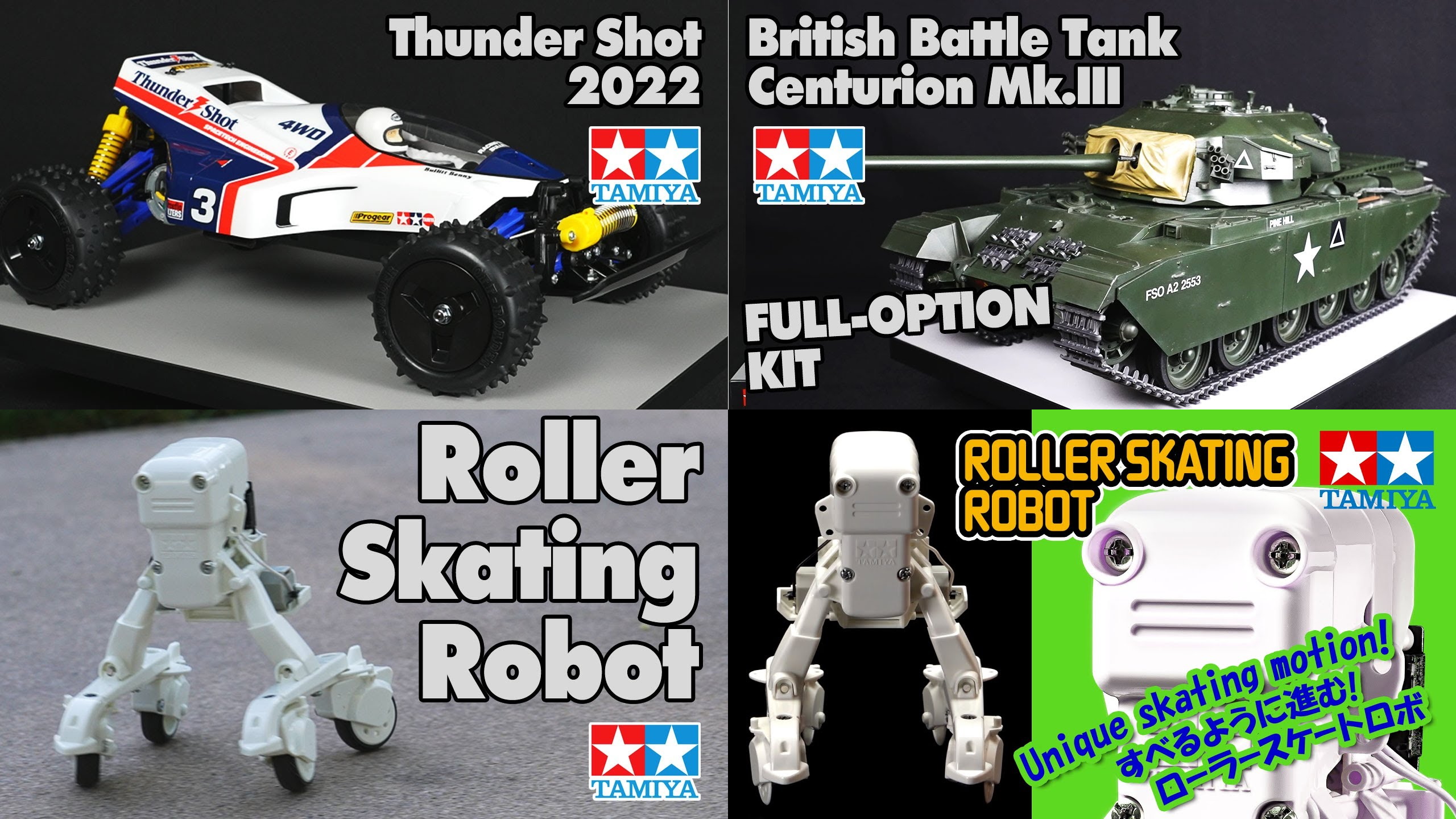 Tamiya 56045 British Battle Tank Centurion Mk.III Full-Option Kit
The Tamiya vast line up of radio-controlled model tanks just got bigger! This R/C tank recreates the Centurion in 1/16 scale as a radio control model. The Centurion Mk. III was developed as a heavy cruiser tank to counter the powerful German Army tanks during WWII. The Mk. III was perhaps the most polished Centurion variant, equipped with the L/66.7 20 pounder long barrel gun. It was also deployed in the Korean War in 1950, and showed off overwhelming strength which saved the Allied forces from crisis many times. The production reached about 2,800 between 1948 and 1956. After the Korean War, the Mk. III were deployed in European countries, but also other areas such as India, Israel, and Egypt with their formidable force.

Tamiya 70248 Roller Skating Robot
Tamiya’s energetic Craft Model Design team never rest! They’ve come up with their latest whimsical Robot creation in a fun new way with the introduction of the Roller-Skating Robot. The Roller-Skating Robot moves forward by opening and closing its legs. This motion is the same as actual skating – a type of motion called swizzle.

Key features of our Rolling Skating friend:
• This Roller-Skating Robot moves forward by opening and closing its legs, and caster limit restricts caster movement and changes lateral to forward motion.
• The rudders on the roller skates can be adjusted to turn right and left.
• Push the left rudder to the outside to turn left, and the right rudder outside to turn right.
• Choose between clear blue body which allows viewing of internal mechanisms and white one which can be freely painted.
• Speed: 33.3 cm/s=1.2 km/h (It takes about 3 seconds to run 1 meter.)
• Minimum turning radius: about 300mm.
• Includes everything needed for easy snap-fit/screw-together assembly.
• Comes with type 130 motor.
• One AA battery is required (sold separately).
• Can move along rails if desired (separately sold universal arms).

Tamiya 70248 Roller Skating Robot
This assembly kit creates the Roller Skating Robot which moves forward by opening and closing its legs. The body has a motor and gears inside. Choose between clear blue body which allows viewing of internal mechanisms and white one which can be freely painted. Also, the rudders at the roller skates’ rear can be adjusted to turn right and left. Includes everything needed for easy snap-fit/screw-together assembly.