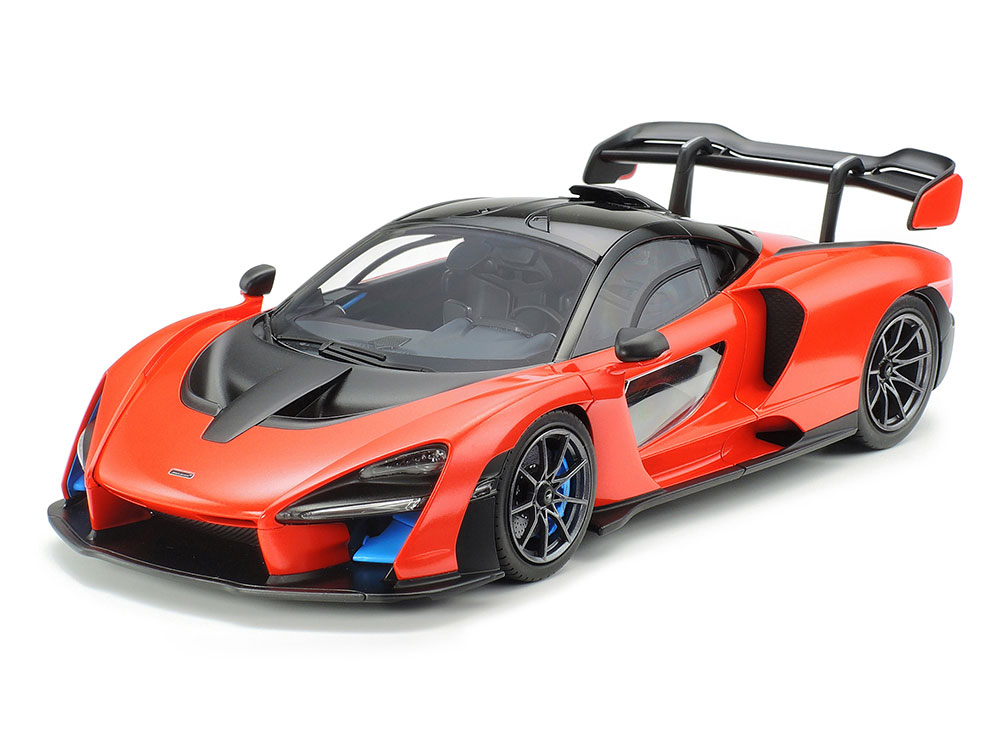 Uncompromising supersports bearing the name of a legendary driver
McLaren Automotive, which forms the McLaren Group with McLaren Racing participating in F1 races, is in charge of developing and selling high-performance supersports cars. The McLaren Senna is the super sports car that the company unveiled at the 2018 Geneva Show. Named after the legendary F1 driver Ayrton Senna, this machine was developed with the concept of “a road car that demonstrates the best performance on the circuit.” A mid-engined 4-liter V8 twin-turbo engine that delivers 800 horsepower is mounted on a lightweight body that uses a lot of carbon fiber. The body thoroughly pursues cooling, aerodynamics, and downforce of each part. It features an aggressive form reminiscent of a racing car, which sets it apart from smoothness. Although it was a limited production of 500 cars, it attracted attention because it was already sold out at the time of the announcement.

Model outline
★ 1/24 scale, total length 198 mm, total width 91 mm, total height 51 mm. ★ The complex body shape that pursues aerodynamics is reproduced as it is in the actual vehicle. ★ Parts are divided for ease of painting, such as molding the window frame on the monocoque side and separating the seat and pad as separate parts. The brake caliper and disc are also separate parts, so it is also a point that the disc rotates. ★ The V8 twin-turbo engine has a sufficient three-dimensional effect while reducing the number of parts. ★ Not only the front radiator but also the rear side radiator is modeled. ★ The spartan interior has a real finish. ★ The gas strut for opening and closing the door is a separate part. ★ The instrument panel can be expanded or retracted. ★ Metal inlet marks are available for the McLaren logo. ★ The tires are made of solid rubber with a texture. ★ The front wheels can be steered. ★ European specifications, North American specifications, and Japanese specifications can be selected and assembled. 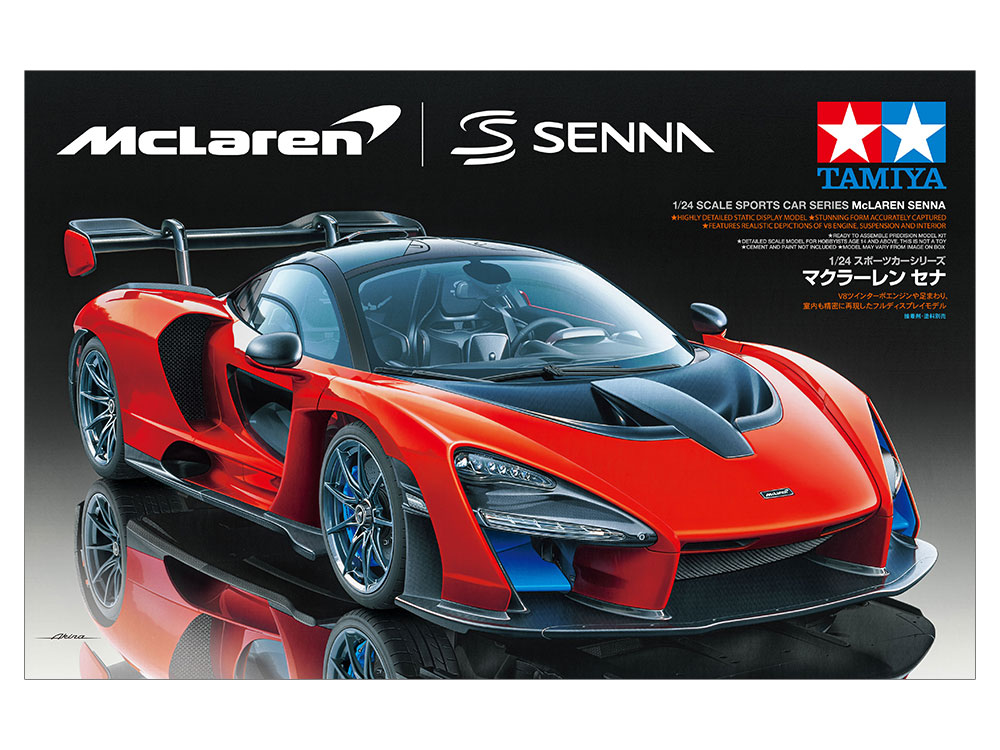 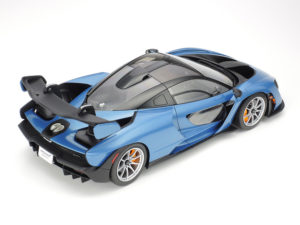 The complex modeling that thoroughly pursues aerodynamics is reproduced as it is in the actual vehicle. 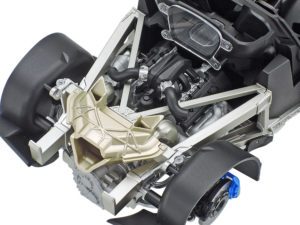 Including the mid-engined V8 twin turbo engine, the subframe and suspension are also spectacular. 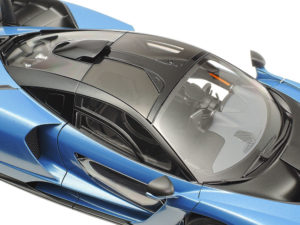 Transparent parts of windows and roofs are assembled without using adhesives and do not need to be painted separately. 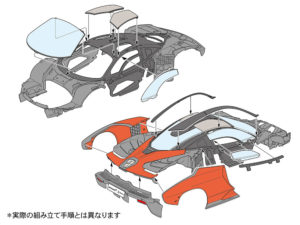 The window and roof transparent parts are fitted into the upper monocoque, and the outer pillars and body panel are assembled. 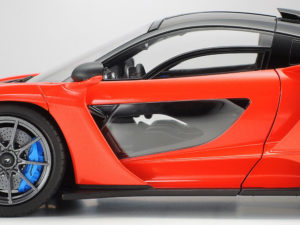 The transparent panel built into the door can also be assembled by simply fitting it in without using adhesive. 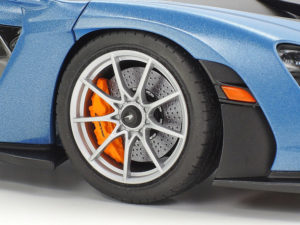 The brake disc and caliper are made into separate parts for ease of painting. 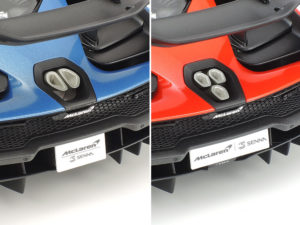 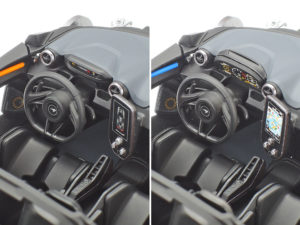 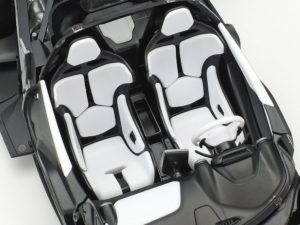 Separate parts for seat and pad. Easy to finish with different colors. 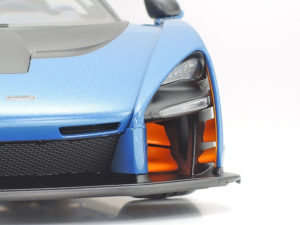 The aero blades installed inside the intake under the headlights are also reproduced. 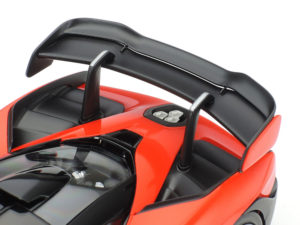 A large rear wing mounted with a swan-neck type stay reminiscent of a GT machine. The stay base has a three-stage louver shape. 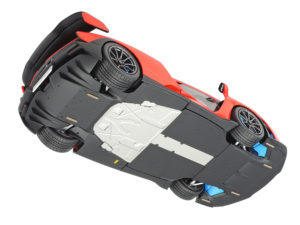 A flat under panel covered with an under panel. The double-structured rear diffuser is also powerful.