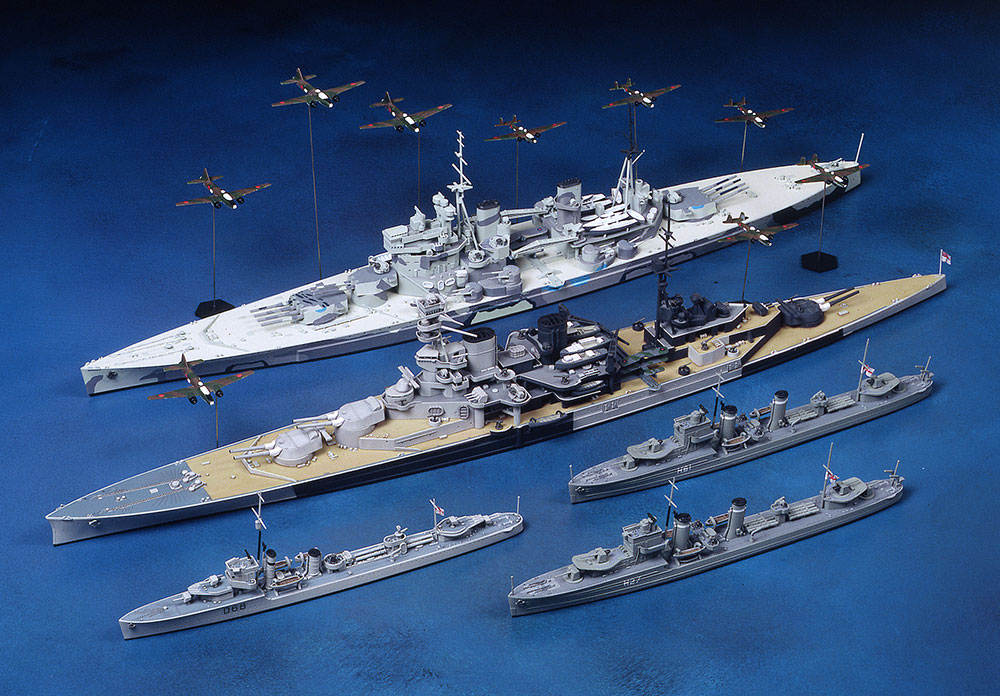 Collection of participating ships in the Battle of Malay
The Battle of Malay on December 10, 1941, known as the first ever naval battle in which the main battleship in operation was sunk only by aircraft attacks. It is a set that can arrange the participating ships and aircraft at once. In 1917, as a British Navy Admiralty V class ship in addition to the Royal Navy battleship Prince of Wales, cruiser battleship Repulse known for its elegant style, two E-class destroyer Electra, Express A vampire was commissioned and later transferred to the Australian Navy. As for the aircraft, 10 sets of 9 Navy Aircraft and 9 Navy Aircraft of the same scale were prepared. Recreate the battle with its name in the battle history with your hands. In addition, a booklet (8 pages in total) that explains the Battle of Malay in detail is included. A well-preserved version of the document that also contains text that spells out the history of the battle by Mr. Noboru Kobayashi, known for “ Japan Plastic Model 60 Year History ‘ ‘, photos of the time, organization chart and attack chart of the attack squad is. 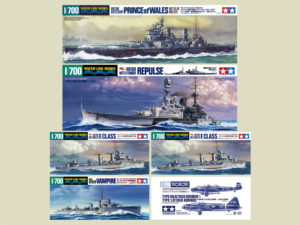 Ships a set of 5 ships and a set of 6 sets of land attack and 96 type landing attacks. 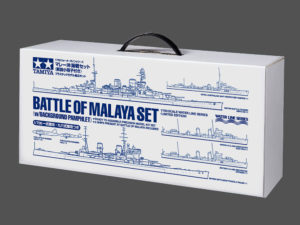 Set in a special package with a convenient handle. 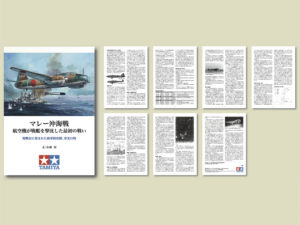 The eight-page booklet also contains text that spells out the details of the battle, photographs of the time, organization charts of attack teams, and advancing charts 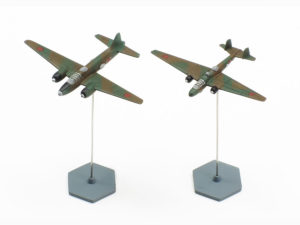 Comes with 10 sets of land attacks and 9 sets of 96 attacks. It can be assembled by selecting the flight state and landing state. The Ninety-six Type Land Attack also reproduces the torpedo mounted on another part. With wire & display stand that can be displayed in flight.


About the Battle of Offshore Malaya
The Royal Navy battleship Prince of Wales departed from the country and entered Singapore with the cruiser ship Repulse on December 2, 1941. The British planned to make Singapore a fortress, and set up a new battleship to restrain Japan’s movement. However, the Pacific War broke out due to the Japanese army attack on Pearl Harbor at dawn on December 8. Following the report of the arrival of the Japanese army in Malay on the same day, the British Toyo Fleet, consisting of Prince of Wales, Repulse, Destroyer Electra, Express, Tenedos and Vampire, departed Singapore in the evening. It is. The next day, 9th, the weather is perfect for covert action, where the clouds are low and often squall. However, in the evening, the rain clouds also cleared, and because it was discovered by a Japanese sea reconnaissance aircraft, I gave up the operation, first returned Tenedos, which was short of fuel, to Singapore, and then reversed the fleet around 10 pm It is. However, because it was in the middle of the night that information that the Japanese army had started to land in Kuantan, we waited for the dawn to scout the situation of Kuantan and set up a strategy to attack the Japanese fleet. However, this was a complete misinformation. For this reason, he rushed back to Singapore as originally planned, but on the 10th, the Japanese Navy Air Corps attack team had already taken off the base and was ready to attack. At 11:45 am, one enemy aircraft appeared in the sky above the fleet, and one hour later, the attack team appeared. At 0:45 pm, the attack began with Bipporo’s repulse bombing. Repulse received one bomb, but turned to starboard to avoid all torpedoes. However, a torpedo released from the Kanoya Air Corps set-up land attack hit the road to rescue the devastating Prince of Wales. At 2:03 pm, I finally died in the sea. On the other hand, Prince of Wales, which received one torpedo on the left side of the chimney on the port side and the stern by the Ninety-six Type 96 land attack of the Motoyama Air Corps, tilted to the left and the speed increased from 30 knots to 15 Decline to knots. At 1:50 pm, a set of 6 Kanoya Air Corps land attacks began. This resulted in three torpedoes near the starboard bow and two torpedoes at the stern, but continued to sail at 15 knots and actively responded with anti-aircraft fire. The Prince of Wales, however, was hit by a 500kg bomb hitting the right side of the rear bridge and close to the port stern by the horizontal bombing of eight 96th-class land attack of Bihoro Air Corps, which started at 2: 3pm Erupted at 2:50 pm and disappeared into the waves from the stern, and Admiral Phillips also fate with the ship. After the battle, many survivors have been rescued by destroyers Electra, Express and Vampire. Prince of Wales and Repulse, who ended their lives in the Battle of Malay, were ironically engraved in the history of war as the first major ships to be sunk by air attacks.