14132 1/12 Ducati 1199 Panigale S – Tricolore
This scale model assembly kit depicts the Tricolore version of the thoroughbred Ducati 1199 Panigale S. As its name suggests, the Tricolore came in a 3-color scheme: red, white, and green to match the colors of the famous tricolore italiano national flag, in commemoration of the 150th anniversary of Italian reunification. It shared most of the base bike’s revolutionary design, including the 1,198cc L-Twin engine integrated into the monocoque frame and directly connected to the swing arm, damper unit, and so on. 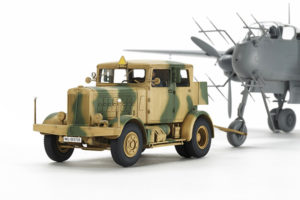 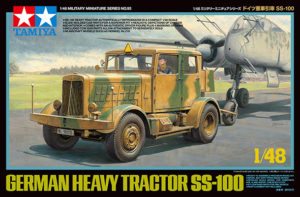 This scale model recreates the SS-100, which was a veritable workhorse for German forces during WWII. Powered by a 100hp 8,553cc diesel, it was based upon a civilian vehicle design and could pull loads of up to 20 tons. The SS-100 was put to work towing all sorts of subjects including artillery pieces, aircraft, and even V2 rockets, as well as recovering broken down vehicles.