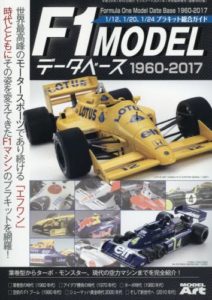 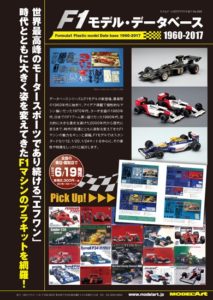 ● ‘F1 model · database 1960-2017’
Formula 1 Plastic model
Date base 1960-2017
- Covers
the F1 machine’s PLACETT which has changed greatly with the era that continues to be the world’s best motor sports !
F1 model newly appeared in the database series. In
the 1970’s, cigar-shaped 1960’s, full of ideas and unique machines, the 1980’s, the turbo prime 1980’s,
Japan’s F1 boom at the height of 1990’s,
from the 2000 age with great aerodynamic evolution to the present age Until the time,
the attraction of the F1 machine which has changed its appearance with the transition of the times condensed tightly. In the F1 model, introduces
its features and features firmly centring on the standard 1/12, 1/20, 1/24 kit .