German IV Attack Tank Brom Bear Among the Bloom Bears developed for fire support of late-type infantry, the late model, which began production in May 1944, will finally be added to the 1/35 MM series. Realistically model a powerful figure with a huge main gun in a large fighting room. Gun barrel can move up and down and right and left. The sighting device and the sliding cover are linked with the turning of the gun. There are two types of rolling wheels with rubber edges and no rubber edges. Looking forward to making it with the derivative type of tank No. IV such as Lang.

★ Length 168 mm. ★ Schulzen (Increased Armor Plate) is divided into 5 pieces on one side and made into parts, and the state where it is partially disengaged can also be reproduced. ★ The whole figure of infantry who stands at the rear of the fighting room with the half figure of Commander and 2 types of decals. 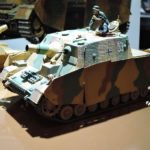 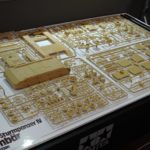 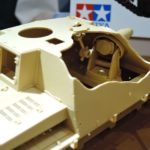