Ferrari circuit racing only model which is said to production volume only 30 cars or so, FXX K is appeared in 1/24. Complex modeling and characteristic rear spoiler of the front-end, large diffuser, of course, reproduce the widening has been body realistic. Such as bucket seats and center console of the left-right asymmetry, such as to surround the head, and in-room reminiscent of a racing car is a three-dimensional feeling enough finish.
★ total length 204mm. ★ equipped with a slick tire on a sharp 10-spoke wheels. Side of the logo are available in the mark. ★ left and right doors and rear cowl can be opened. Also make Gotae enough V-type 12-cylinder engine

1/24 SCALE FERRARI FXX K PHOTO-ETCHED PARTS SET (12668)
etching parts, such as the beginning of the air intake and outlet portions of the front and rear bumper for the radiator cover will increase the sense of precision of the finish. In addition, the seat belt is composed of a dedicated sheet and etched parts, to produce a three-dimensional appearance.
★ etching parts bridge-less specification that there is no need or disconnect the gate. ★ seat belt is sticker type.

1/24 SCALE FERRARI FXX K CARBON PATTERN DECAL SET (12669)
body exterior from the engine room, FXX K. carbon up to the interior has been used abundantly Enhance the model of perfection more, it is a carbon-like slide mark. It was composed of three types of carbon pattern to suit the part.
★ printing in a state in which the combined shape to each part. ★ sticking with illustration. Mount size 130mm × 270mm.

1/100 FUJI DREAM AIRLINES EMBRAER 175 (92197)
Brazilian state-of-the-art small-sized passenger jet that Embraer has been the development of, Embraer 175 appeared in the 1/100 scale assembly kit. It was modeled without leaving the beautiful style. Cockpit interior, such as seats and instrument panel also three-dimensional realism finish. Fuji Dream Airlines set the large-format decals that can be reproduced by selecting a colorful aircraft from Unit 1 (FDA) has been operating up to 10 Units.
★ total length 315mm. ★ modeled in a tarmac state that issued the front legs and the main landing gear. ★ fuselage top and bottom of the antenna of any kind a sharp finish. ★ window of the cockpit is reproduced in the transparent parts. ★ also available weights to put inside the nose.

1/35 US TANK DESTROYER M10 (MID PRODUCTION) (35350)
M10 tank destroyer of the United States military’s popular along with M4A3E8 is awaited is the emergence in 1 / 35MM series. A powerful figure that has been constructed at an inclination armor with a large bolt, modeled realistically based on the actual vehicle coverage. Turret and combat the indoor part of the open-top also loading unit and the sight 3-inch guns, ammunition rack, such as three-dimensional feeling enough. It appeared in the North African Campaign late, also spread the width of the scene produced only in the continued fight M10 in a wide range of fronts.
★ total length 196mm. ★ casting pattern of the front portion of the vehicle body and mantlet, upper body and turret of the welding pattern also delicate finish. ★ T51 type track is handy belt-type realistic. ★ crew of dolls three bodies in the shooting preparation, decal two with.

1/35 GERMAN FIELD MAINTENANCE TEAM Ando EQUIPMENT SET (37023)
is a set of various types of equipment that can produce a German field maintenance facility, which is provided to the front line. Simple cranes and work desk, welding gas cylinder, provides a broad range of accessory parts such as paint for the compressor. The crane using a metal chain of ultra-fine, also newly added hook portion. Two bodies with dolls of soldiers during the maintenance work. Scene production in combination with a wide range of German military vehicles, such as Kubelwagen can enjoy.
★ jack and drums, twelve early type jerry cans, oil cans, tool box, tooling, set well as Zatsugu box. ★ enameled wire and nylon yarn that can be used as a wire or wire rope was also prepared.

1/48 JAPAN GROUND SELF DEFENSE FORCE TYPE 10 TANK (32588)
type 10 has attracted a great deal of attention as a fourth-generation Japanese main battle tanks of the Ground Self-Defense Force will join the 1 / 48MM series as the first of the working tank. Land do the actual vehicle coverage and thorough by the full cooperation of the Self-Defense Forces, updates to model the latest C4 specification which has been deployed from the second half of 2014 the respective units. 1/35 comparison of the type 10, the display of side-by-side uniform mainstay fighter F-15J of the Air Self-Defense Force in the same 1/48 would also be fun.
★ total length 199mm. ★ body inside of weights produce a sense of weight. ★ consolidated prefabricated track with one-piece straight sections. ★ tank length of the bust, decal two types with the first tank battalion and the eighth Tank Battalion belongs vehicles. 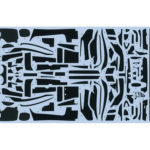 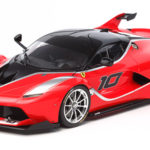 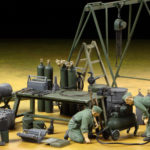