RAIKIRI (MA CHASSIS) JAPAN CUP 2016 (95093)
is the emergence Memorial model for the summer of the Japan Cup. It finished the popularity of Raikiri to white base of the pace car style. MA chassis having a high strength polycarbonate ABS resin. Battery holder and A parts is black made of low-friction resin, such as the gear cover. The super-hard low-height tire was printing the Japan Cup logo “JAPAN CUP 2016 TAMIYA” in white.
★ stickers, dedicated design that contains the Japan Cup logo. ★ wheel, three-dimensional design is impressive Y-spoke type (red). ★ gear ratio is 3.5: 1. ★ motorized.

DASH-5 DANCING DOLL PREMIUM (SUPER-II CHASSIS) (95266)
“Dash! Yonkuro” in appeared in the dash corps only female, Sumeragiwako of machine is appeared in the premium specification. Vertical fin of the vertical and horizontal tail and side pontoons distinctive sharp form attractive. The chassis is made of ABS resin of dark blue. Turn switch, 2-point fixed rear stay, and the A component such as a 13mm roller, open locks one lock gear cover is yellow parts available at the touch of a button. ★ sticker new design of metallic tone. ★ fitted with slick tires on 5-spoke wheels. ★ high Super II chassis adoption of evaluation in the race. ★ gear ratio is 4.2: 1. ★ motorized.

HG CARBON REINFORCING PLATE For 13 / 19Mm ROLLER (1.5Mm) (15497)
is a carbon plate of straight bar shape that can be used in a variety of remodeling. It can be attached to 13mm or 19mm roller full provisions width. In Lacey carbon pattern, Tamiya mark and white print, such as a roller size shine.
★ 1.5Mm in addition to the carbon plate 2 sheets of thick, screws and nuts for parts mounting, washer, etc. also set.

HG CARBON WIDE FRONT PLATE (1.5Mm) (15498)
is 9,11,13,19mm 1.5mm thick carbon steel stays of which is fitted with a roller to the full provisions width. Lightweight, high strength, white print, such as the unique carbon pattern and Tamiyarogo will boost the racing mood.
★ MA, MS, AR, VS, Super II, can be attached to the Super XX chassis. There are some things processing is required.

HG CARBON WIDE REAR PLATE (1.5Mm) (15499)
is attached to 9,11,13,17,19mm roller full provisions width, is a high strength 1.5mm thick carbon steel stays. In addition to the racy carbon pattern, was white print the diameter of Tamiyarogo and can be mounted roller.
★ MA, MS, AR, VS, super Ⅱ, Super X, Super XX, will be attached to the Super TZ-X chassis

THUNDER SHOT CLEAR BODY SET (POLYCARBONATE) (15502)
ideal for lighter remodeling that has become the mainstream in the race. Small is the Thunder shot clear body set of Jr. on the front projected area in the lightweight among successive clear body. Improved acceleration performance and maximum speed, also increase the running stability with a low center of gravity.
★ strong unbreakable polycarbonate body into shock. ★ with clear body dedicated transparent sticker.

HYPER-DASH 3 MOTOR J-CUP 2016 (95091)
is the motor that was to commemorate the popular annual Japan Cup. Produce a premium sense of backing and special design with larger layout characters JAPAN CUP 2016 to motor label. Even as a souvenir, it can also be used for the race.
★ motor label Gold & Green. ★ adopt the electrical efficiency and durability of excellent silver carbon brush in the balance.

A-SPOKE WHEELS For LOW-PROFILE TIRES (SILVER PLATED) (95270)
in 1/1 GIANT MINI 4WD PROJECT (Aero Avante vehicle of), is the wheel for four wheel drive mini with the image of the aluminum wheel that has been adopted in the actual vehicle. American style of design with the motif of “A” in the alphabet is attractive.
★ narrow tread type of silver plating specification. ★ 4 pieces of one minute. ★ four wheel drive mini PRO, you can use the mini four-wheel drive each car.

FRICTION POWERED SNAIL (70223)
the second installment is snail ecological tool set that the battery also not be used motors. Flywheel (flywheel) is the energy of the inertia to rotation, go leisurely. Shell and polypropylene sheet body is a flexible. The person who crank attachment of, advance shaking his head and tail to the left or right, or you will be assembled to choose the two operations to proceed by moving back and forth the head. The maximum duration running time is about 35 seconds.
★ total length of about 155mm. ★ become the shape of the head is to guide, and well avoid the obstacle. ★ necessary parts are all set, screws and inset only in assembling OK. ★ power unit is made of a transparent ABS resin.

SWIMMING DOLPHIN (70224)
is a tool set of dolphins swim by moving the tail fin and the head up and down. Changing the rotational movement of the underwater gear box into a reciprocating motion in the crank, swim by moving the tail fin of a soft resin sheet up and down like a dolphin. Also possible to swim while turning to the left and right by adjusting the mounting angle of the dorsal fin and the sucker. If you change the mounting position of the crank or a float, you can also change how to swim and speed.
★ total length of about 180mm. ★ body and a soft resin sheet is pretty pink, such as the tail fin. All set the required parts ★. Easy assembly with a simple structure. ★ AAA batteries single use (sold separately). 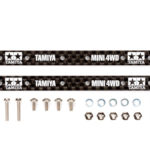 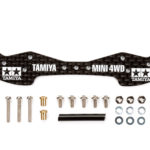 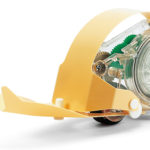 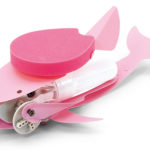