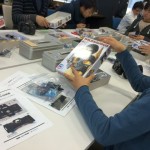 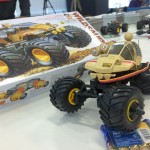 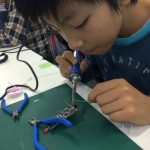 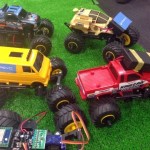 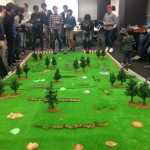 Cerevo and DMM.Make AKIBA the “workshop organized by Let’s make IoT mini four wheel drive that can be freely manipulated in Smartphone! “, the off-road type” Wild mini four wheel drive steering the “in smartphone, and throttle control can be remodeled thing. Cut without regret the 4WD mechanism the front part to structural 2WD reduction. The front section was produced in 3D printer original steering parts and wearing the, servo motor and gear to steering in.

Radio Control (RC) Partial The important thing is to manipulate it. In the case of ordinary RC, it is to communicate using the 2.4GHz band of RC dedicated radio band 27MHz / 40MHz and general-purpose at the transmitter and receiver, this time the wireless LAN module to use the, smartphone and the WiFi connection , such as Safari and It is controlled by the browser. Forward and raise your fingertip over the smartphone, lowering the recession, it will bend on the left and right. The driver for controlling the motor, the components such as capacitors and LED soldering iron are connected using, proceed to assemble.

Hobby and electronic tools, which spread with the advent of IoT era
Now smartphone is widespread, even if there is no dedicated transmitter WiFi connection by utilizing the smartphone, we were easily able to RC. Production costs also quite reasonable, half a day of production time is a blink. Although this time the participants were many adults, the first time children of the family are many, workshops which can be enjoyed even by children and had become.

(Note: The mini four wheel drive is a registered trademark of Tamiya)