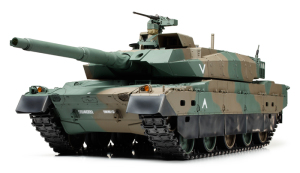 The thorough vehicle coverage by sound and light, also real reproduce until movement in 2010 to (-out Marchi people) 10 Expression of formality adopted the Ground Self-Defense Force is the assembly kit of electric radio control tank that was reproduced in 1/16 scale tanks . Performs vehicle coverage that was thorough by full cooperation of the Ground Self-Defense Force, modeled on real slim body with a 120mm Smoothbore and sloping armor. Working tank seems powerful at the beginning a smooth forward and backward and left and right turning, turret turning and gun barrel up and down also can be controlled, and was reproduced to gun barrel after seat and body reaction at the time of shooting. Such as engine sound and main gun firing sound that was recorded from the actual vehicle, sound tuning in each movement. Gun and twin gun also works in conjunction fire light. In addition, by sensing the body posture and turret of the orientation of the running, the gun barrel control system that automatically adjusts the left and right movement of the upper and lower turret and gun barrel is equipped. You can run it constantly toward the gun barrel against preset direction at the transmitter. In addition, the barrel under the control of dedicated servo, to return to the loading angle after firing, also done automatically body avoidance behavior of the barrel when it is directed toward the turret in the rear. Optional battle system also can be mounted.

Driving performance
Torqueful 540 motors are equipped with two incorporating unit type of gear box to the rear. You can run strong from low enough power to high-speed. Moreover, that controls the left and right turning and forward-reverse in separate motor, adopted almost the same power transmission system and vehicle of transmission. Pivot turn from slow turning, I realized the more realistic maneuvering sense to ultra pivot turn.

Turret, gun barrel behavior
Turret can be adjusted by turning speed operation of the transmitter, produce a sense of realism realistic operating noise. In addition, when the turret while lowering the gun barrel to pivot at the rear, the barrel is avoidance behavior that is automatically horizontal state to avoid the car body (Dick clearance function) also carried out by control of the servo. Main gun with fire light by the orange LED, thrilling fire sound synchro. The set has been recoil for gear box inside the turret, sitting rear barrel is quickly along with the firing sound, reproduced a series of movement back smoothly. In addition, it becomes loaded angle gun barrel after the main gun firing is automatically elevation, was reproduced behavior that put the following bullets that go back to the original position followed.

About Ground Self-Defense Force Type 10
By using the latest technology has been formality adopted in 2010, state-of-the-art tanks 10 Expression of the Ground Self-Defense Force (-out Marchi people) is tank. Equipped with 44 caliber 120mm Smoothbore domestic the main gun. Including the performance improvement of the fire control equipment, by the automatic tracking function and gun stabilizer, it is said to be proud of the accuracy of Freikugeln against moving target object even in the S-shaped slalom run. The C4I (Command Control Communication Computer and Intelligence) and each unit by introducing a system called, became possible combat in collaboration. Power unit V-type 8-cylinder diesel turbo engine output 1,200 horsepower was finished in compact. The combination of the stepless automatic transmission steering machine, and has realized the excellent mobility. Suspension before and after the vehicle, right and left, total oil pressure expression that can be controlled up and down attitude. Furthermore, by employing a module armor such as the turret enhance the operability and defense force, can be quick trailer for deployment to Japan. Troops deployed from 2012 is started, while promoting the operation and crew education, making it the expected to be deployed by sequentially alternating with Type 74 tanks. 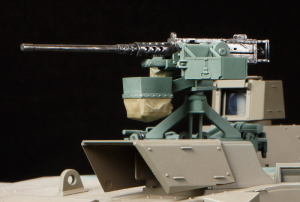 12.7mm heavy machine gun also realistic finish that is attached to the top of the cupola circular rail for vehicle length. 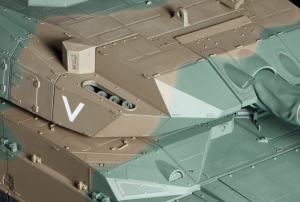 Turret front on both sides reproducibility fire smoke device 4 twin 2 groups that are equipped with a unique arrangement. 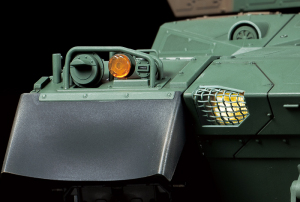 Headlight, control operation lights, control the vehicle width lamps can be turned on by LED 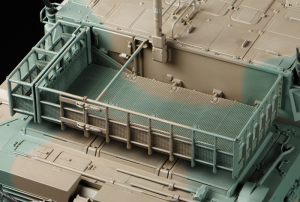 Including the mesh part of the turret rear basket, and using an etching parts in the engine compartment on the deck grill below it. 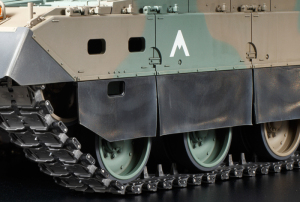 Made in soft resin side skirts have a texture. 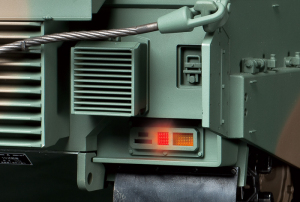 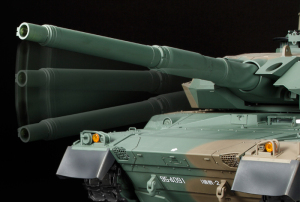 Main gun can be controlled up-and-down motion of up to about 10 degrees elevation, depression about 6 degrees by dedicated servo. 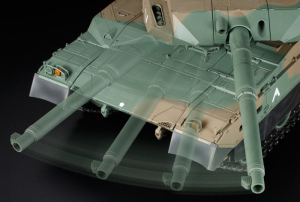 The turret ring built-in 20 pieces of metal balls, and achieve a smooth turning. 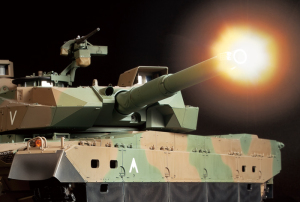 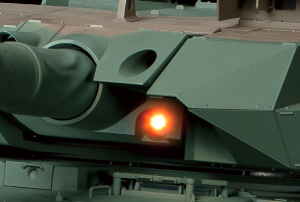 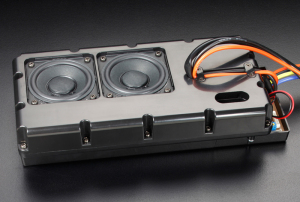 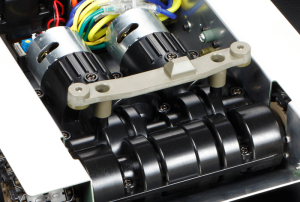 Torqueful 540 is equipped with a gear box of two incorporating unit formula motor to rear. 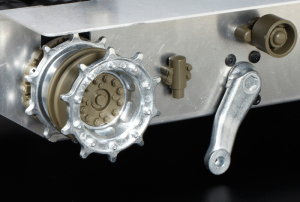 Duralumin chassis, and extensive use of metal parts such as die-cast drive sprocket and suspension arm to ensure the strength. 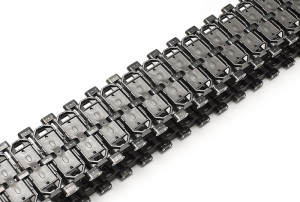 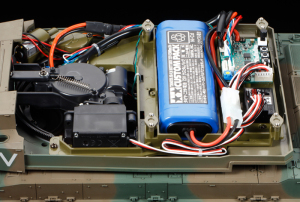 Centralized equipped with a major mechanical and traction battery in the turret. Desorption of the upper turret also easy by four magnets were placed on the mechanical deck.

Gun control system
The image of the movement of the Type 10 was adopted advanced fire control system, was equipped with a “gun barrel control system”. Equipped with a control board in each of the body-turret, the turret control board and a built-in gyro chip. By sensing the body posture and turret of the orientation of the running, automatically adjust the left and right movement of the top and bottom and the turret of gun barrel. Simply pre-set the position of the gun barrel at the transmitter, you always can be run while the direction you have set the gun barrel. 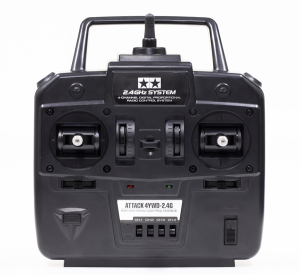 2.4 GHz Proportional Radio Control that allows running more than one
Stick type of 4ch transmitter, running for 7.2V battery, also set such as charger. RC mecha without the need for band adjustment by Crystal exchange, feel free to adopt the 2.4GHz radio set to enjoy multiple units. 2.4GHz etc. to have been also used wireless LAN computers, is characterized by worry of interference is less because the transmitter and receiver (the body) is a one-to-one correspondence.

Basic Specifications
★ Length: 596mm, overall width 207mm, gross weight about 4050g. ★ Use the metal parts around the foot, such as the beginning suspension arms and drive sprocket the chassis. ★ main gun in the main the made ​​out machined aluminum, Bore evacuator, such as the gun barrel cover using the plastic parts. In addition, the rear basket and the engine compartment on the deck grill and increase the sense of precision using the etched parts. ★ consolidated pre-track is made ​​of a hard plastic that reproduces the shape in real. ★ Sound is tuned to every move. I sounded a massive sound from two speakers mounted on the vehicle body. ★ 4ch Propo of the multi-function unit and 2.4GHz band specification, traction battery, full set with even charger. 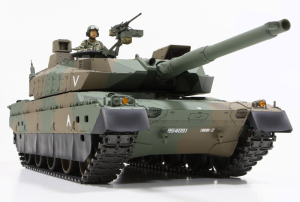