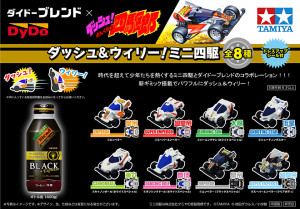 Will be released in the new, the “DyDo blend BLACK400” (Kita-ku, Osaka, President Head Office) Dydo Rinko Corporation.
I think this time, in order to newly released, would like to pick up the goods to more customers, in April, a limited amount campaign popular from ages from children to adults, friction car mini four wheel drive comes with a will revolve around the convenience store from Tuesday, the 22nd.