The team of tamiyablog.com had the chance to the see and drive the new Bruiser re-release at the Nuremberg Toy Fair 2012. Our first observation was that the new gearbox drives similarly quiet as the old one and shifts gears very smoothly. Also although not many changes have been made at the steering (at a first glance we only noticed new steering knuckles) it seems to respond better and turn quite sharper which is probably also because of the differentials. Another observation was that it doesn’t have front free drive wheel hubs any more (as they aren’t really needed with a diff) and so climbing in reverse is significantly improved. The tires of the 2 running prototypes seemed also a bit softer then the old ones and the tires of the demonstration chassis were significantly softer. The new gearbox is shorter and elastically mount only in the rear (front mount is stiff) and it has 2 lugs which aren’t used, so maybe Tamiya has more future plans for it? Also in the end there is a rod which at first glance has no function but possibly is for easier servo rod alignment. The differentials have a screw and thread on the upper side which is probably for locking them. From what we understood from a Japanese employee the box won’t have blisters and that there won’t be a Multi Function Controller for it, the runners in the fair had just both TLU-01 and TLU-02 light units. The decal sheet has 4 blue squares to possibly cover the side bar screws, weird it didn’t have 6 or 8 for all the screws. All in all we were extremely satisfied by this unexpected re-release and the amount of important but well hidden improvements. 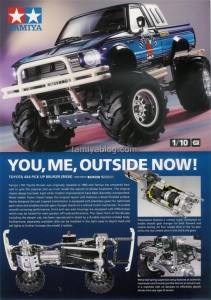 More photos of the fair can be seen here.