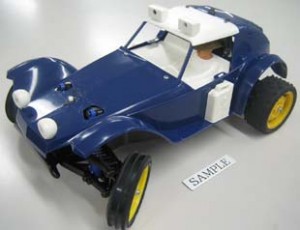 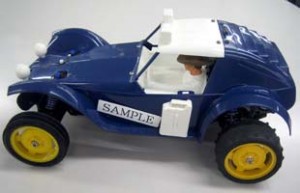 Following the success of the “Buggy Champ,” 1980 saw Tamiya release another prominent
figure of the R/C boom, the Holiday Buggy. It featured a simple bathtub design and was
equipped with a low gear ratio and a compact motor making it perfect for those new to
R/C. Also, when compared to the Buggy Champ, it featured a simplier construction which
reduced costs to make it more accessible to the public. This was another famous machine
that attracted many to the exciting world of R/C.
Now, Tamiya is proud to re-release the Holiday Buggy to celebrate its 30th year anniversary.
The Holiday Buggy now comes mounted on the DT-02 chassis which has its battery pack
loaded in the center of the bathtub frame and displays excellent handling performance
even on rough surfaces. R/C fans will definitely rejoice when they see its nostalgic form
and relive the fun and easy-going driving performance of this machine.
About the Item
-This is a 1/10 R/C assembly kit of the special edition Holiday Buggy.
-This item meets ROHS regulations.
-Features the same ribbed front and spike rear tires as the original.
-Newly designed full-body sticker sheet included.
-Blue colored durable polyethylene (PE) body included.
-Comes mounted on the excellent handling 2WD DT-02 chassis.
-Driver figure included.