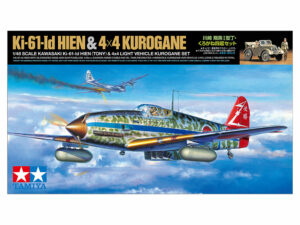 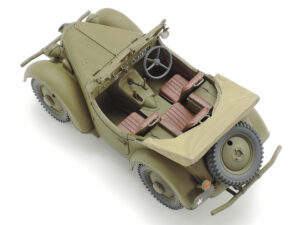 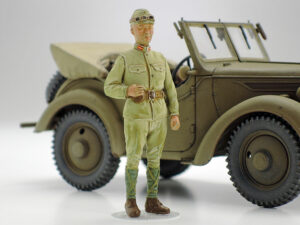 About the Hien Type I Ding
The Hien was the only Japanese fighter equipped with a liquid-cooled engine during the Pacific War. Equipped with a German-made Daimler-Benz DB601 engine licensed production Ha40. It was characterized by a streamlined nose unique to a liquid-cooled aircraft and a long and narrow main wing. It was adopted as a Type 3 fighter in 1943, and its armament was strengthened several times to counter the highly bulletproof American military aircraft. Among them, the I-type Ding with the nose extended by 20 cm and equipped with two 20 mm cannons in the fuselage and two 12.7 mm cannons in the main wing was serialized from January 1944 to January 1945. Approximately 1,360 aircraft were manufactured. The Hien I-type Ding takes advantage of its excellent high-altitude performance and heavy armament to demonstrate its power in intercepting B-29s in the mainland air defense battle. In particular, the brave battle of the 244th Squadron led by Kobayashi Squadron, who was in charge of the capital’s air defense, is well known.

About Kurogane 4-wheel
The world’s first practical four-wheel drive vehicle developed at the request of the Japanese Army is the Type 95 small passenger car, also known as the Kurogane 4-wheel. Various improvements were repeated even after formalization, and the type produced from 1937 is equipped with a 33-horsepower V-type 2-cylinder 1400cc air-cooled engine on a 3-seater body. Equipped with front wheel independent, rear wheel leaf rigid suspension and large diameter tires, it demonstrated excellent off-road running performance. Approximately 4,800 units of each type were produced from 1935 to 1934, and they continued to run for reconnaissance and communication in a wide range of fronts, from mainland China to Southeast Asia and the Pacific theater.

About the Model
This is a 1/48 scale plastic model assembly kit that includes the Hien Type I Ding and the Kurogane 4-Stage. 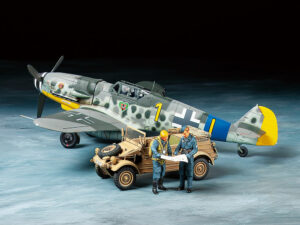 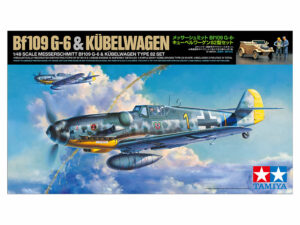 Special kit that conveys the tension before a sortie, perfect for scene production

About the Messerschmitt Bf109 G-6
The Messerschmitt Bf109 continued to fight as the main fighter of the Luftwaffe throughout World War II. Among the Bf109, which produced more than 30,000 aircraft, the largest number in the history of fighter aircraft, and many developed and derived types were created, the G type is equipped with a Daimler-Benz DB605 engine with a takeoff output of 1,475 horsepower. And in order to counter the high bulletproof American B-17 bomber, the G-6, whose nose armament was reinforced from a 7.92mm machine gun to a 13mm machine gun, was serialized from February 1943 to February 1945. More than 13,000 aircraft were mass-produced. A distinctive feature of the aircraft is the bulge called the “voile” on the side of the nose that covers the discharge chute of the 13mm machine gun bullet. In addition, some aircraft were equipped with one 20mm machine gun gondola on the underside of the main wing to enhance firepower. The G-6 fought on a wide range of fronts, from the East and West fronts to the Mediterranean Sea, and fought hard to intercept bombers and fight air superiority until the end of the war.

About the Pkw.K1 Kubelwagen Type 82
During World War II, the Kubelwagen was used by the German army for communication, reconnaissance, and troop transport on all fronts, and was also used by the Air Force as a foot for crew members and soldiers. Developed based on Volkswagen, which was planned as a German national car. In addition to the simple and lightweight body structure, the highly reliable air-cooled engine and four-wheel independent suspension ensured excellent running performance.

About the Model
This is a 1/48 scale plastic model assembly kit that includes the Messerschmitt Bf109 G-6 and Kubelwagen Type 82. 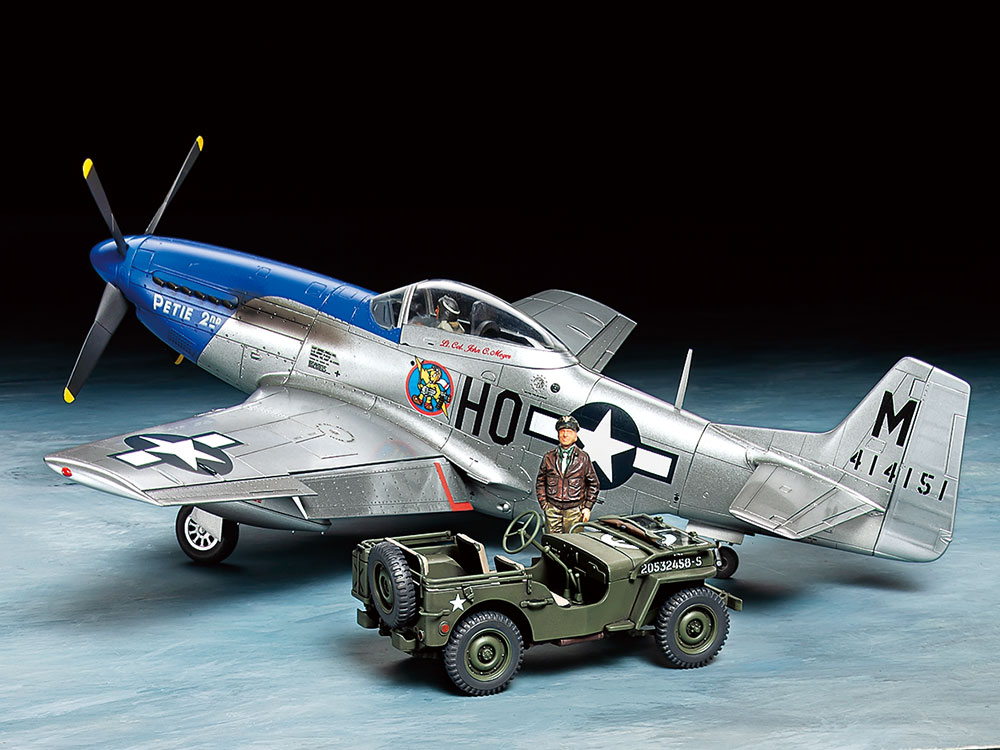 Combining the air and land masterpieces of the U.S. military into one set

About the P-51D Mustang
With a high speed of over 700km/h and a maximum cruising range of approximately 3,700km, it is the best fighter plane of World War II. The P-51D Mustang of the United States Army Air Corps. Introduced in May 1944, the P-51D demonstrated well-balanced flight performance with its sophisticated aerodynamic design and supercharged Packard Merlin V1650-7 engine. In addition, the use of improved armament with six 12.7mm machine guns and the adoption of a water drop canopy with good visibility solidified the reputation as the definitive version of the P-51 series. Especially on the European front, he overwhelmed the Luftwaffe by continuing to fly to escort B-17 bombers heading for Germany. contributed to the Allied victory.

About 1/4-ton small four-wheel drive military vehicles
During World War II alone, the production volume of 600,000 units was astounding, and the forerunner of today’s four-wheel drive vehicles was the U.S. military. 1/4 ton compact four-wheel drive military vehicle. Its robust and highly reliable engine enables it to perform excellent off-road performance, and it can be used for a wide range of missions, including transportation of soldiers and supplies, reconnaissance, and communications. -In addition to the United States, it was supplied to many countries including the United Kingdom and the Soviet Union, and led the Allied Forces to victory over all battlefields such as Europe, Africa, and the islands of the Pacific Ocean.

About the Model
This is a 1/48 scale plastic model assembly kit that includes a P-51D Mustang and a 1/4 ton compact 4WD military vehicle.

Presence of innovative style enhanced by vehicle and pilot

About Dornier Do335A Pfeil
Innovative style and equipment such as two engines and propellers placed in front and behind the aircraft, a cross-shaped tail, and an ejection seat. The Dornier Do335 is a German high-speed multi-purpose aircraft that recorded a maximum speed of 760km/h. Development began in 1942, and the prototype Do335V-1 made its first flight in October of the following year. It showed excellent basic performance. After that, the armed prototype V-5 and the production type A-0 were completed, and in September of the same year, the full-scale production type A-1 appeared. The A-0 and A-1 are single-seat fighter-bombers equipped with one 30mm cannon and two 20mm cannons in the nose, as well as a bomb bay. And the war ended. I didn’t get a chance to prove myself.

About the Pkw.K1 Kubelwagen Type 82
During World War II, the Kubelwagen was used by the German army for communication, reconnaissance, and troop transport on all fronts, and was also used by the Air Force as a foot for crew members and soldiers. Developed based on Volkswagen, which was planned as a German national car. In addition to the simple and lightweight body structure, the highly reliable air-cooled engine and four-wheel independent suspension ensured excellent running performance.

About the Model
This is a 1/48 scale plastic model assembly kit that includes the Dornier Do335A Pfeil and Kubelwagen Type 82.