BANDAI NAMCO Entertainment Inc. will announce the broadcast of a TVCM featuring a jungle pocket belonging to Yoshimoto Kogyo on the game app “Mini 4WD Super Speed ​​Grand Prix” distributed on the App Store and GooglePlay. In addition, the jungle pocket in the middle of the Mini 4WD generation also released a control created exclusively for “Mini 4WD Super Speed ​​Grand Prix”! Please check it by all means.

Jungle pocket appearance “What is this?”
A new TV commercial will be broadcast on March 7 (Sat) in some areas!
In this CM, trio entertainer “Jungle Pocket” has appeared as a classmate.

Story
Three people gather after a long time at the alumni reunion Three people who can’t easily remember the
familiar parts
“What is it?”
If you are a mini 4WD experienced person, it is a commercial that will involuntarily get caught.

Shooting scenery
This CM was shot at a pub in Tokyo.
The three people in the middle of the Mini 4WD generation were excited by Mini 4WD talks during the shooting.

Hidden elements
Something related to the Mini 4WD is in the CM.
By all means, please watch and find many times!
* The answer will be released on the official Twitter at a later date.

Jungle pocket creates original cont only for “Mini 4WD Super Speed ​​Grand Prix”!
The title is “Classmate”.
After the reunion at the elementary school, the three people drink again as a second party, but there is a problem with the jungle pocket “ Mini 4WD generation ” and the center “ Mini 4WD ” It is a content that shows the knowledge and affection of mini 4WD like 3 people who spent with 4WD.

Also available on a special site!

Get gorgeous items that can be used in the game! TVCM & contest release commemorative Twitter campaign! 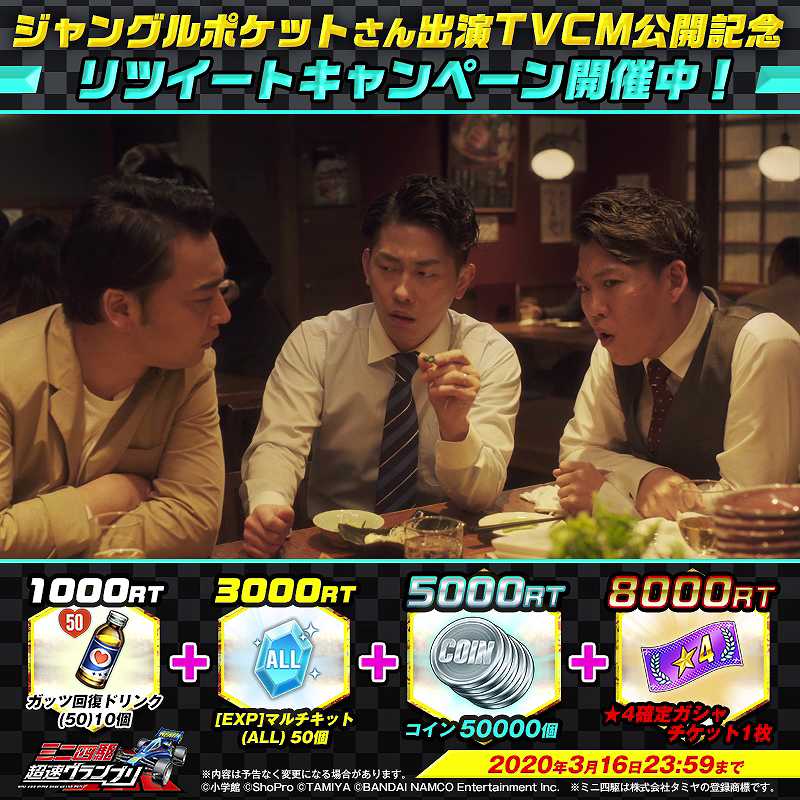 A retweet campaign is being held to commemorate the release of the new TV commercial!
Every time the number of RTs increases, you will receive luxurious in-app items!