Announcing a prize-winning work from the work received from Mini 4WD fan in Japan!

Mini 4WD Japan Cup held Mini 4WD design competition held for the first time in 11 years, 2018, which will become a commemorative year of 30 years. We introduce prizewinners that got high ratings from among 568 works from across the country, over 1,000 works. In this contest, we announced that we will commercialize the prize-winning work of the award as a mini 4WD, but many of the works with the completion degree exceeding the initial assumption were received, and for the selection, judges Everyone bothered me a lot. It is too regrettable to end this attractive work with awards … As a result of repeated consultations with the judges within the company, eventually, not only the works of the first prize of the award, but also the excellent prize We have decided to commercialize a total of five works, two works of Tamiya Prize and two pieces of Tamiya Prize! We are already preparing for 5 products to be commercialized. It is this winter schedule that five machines with plenty of mini 4WD fans’ intention will arrive at everyone’s hand. Please check your finish for your hands by all means! 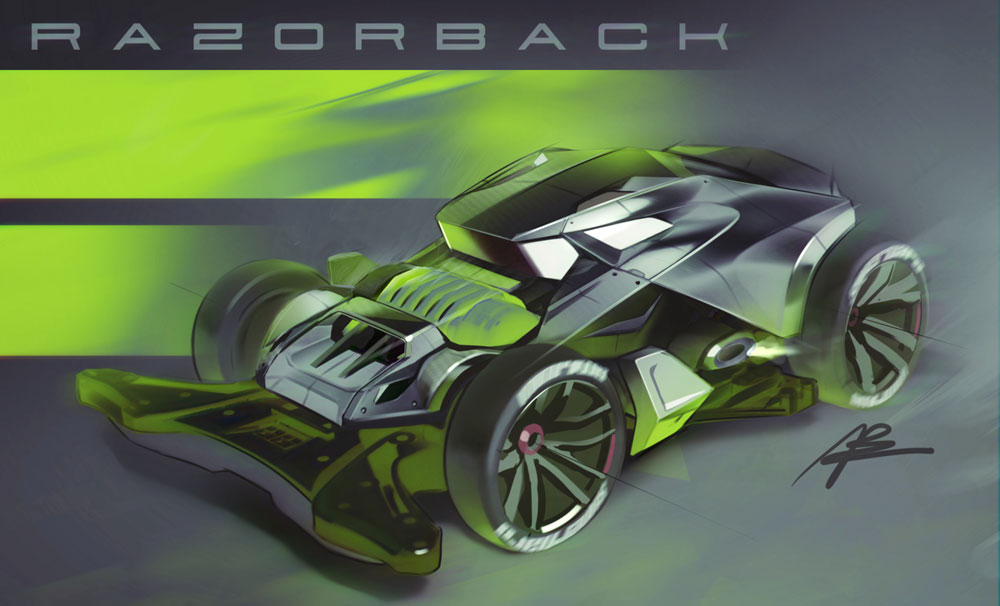 I am honored to have the Best Award! In this work, I also consciously become a thing that the view of the world is transmitted from the styling of the machine, in order to be reflected in the eyes of those who are familiar with the mini 4WD and also in the eyes of the unfamiliar persons. I hope this design will make the future Mini 4WD industry more interesting.

With a motif of hot rod and wild boar, we aimed at a monster machine that pushed through the course with the momentum of rushing. While exposing the front motor which is the taste of the FM – A chassis, we are directing an unprecedented atmosphere in a posture full of forward feeling and a standing edge.

· Balance that was not likely to be so far. There is a feeling of running and racing which seems to push through with torque even though it has a heavy feeling design, but it seems to be able to shine even at the course. Also, the balance with the chassis is exquisite. I feel the appearance of the motor cover and the extent of the protrusion of the rim is also nice ★ I also felt the charm enough as a vehicle design. (Yamazaki)

· A unique rushing feeling form with motif of wild boar and hot rod is irresistible. It is also a point that it is being updated not only to a classic hot rod but also properly contemporary modeling. It is good to incorporate the motor cover of FM-A as an engine and incorporate it as part of the design! (Nezu)

Although it was not selected from the first prize / excellent prize, a lot of works that are too regret were received only by recognition.
Therefore, we added a new Tamiya prize in this design contest. In addition to 3 works of the Best Award and Excellence Award, we will also commercialize these two works!