It was featured in the manga Hyper Dash! Yonkuro as Rinko Sumeragi’s machine.

It was featured in the manga Hyper Dash! Yonkuro as Rinko Sumeragi’s machine.

As with other Hyper Dash Machines, the Dancing Divine Doll features the modernized and sharper design based on the original Dancing Doll.

The side, stylized vertical fins were protruded from the front nose, with small head lamps on them. Taking the design clues from both Rise-Emperor and Shooting Proud Star, the top fan and the horizon fins on the rear were now a merged, separate piece from the main bodyshell, and incorporating the intake on the front of it. The canopy is now much tinner compare to the Dancing Doll.

The stylized ‘5’ mark and the CoroCoro Dragon decals can be found on the bodyshell. It was mainly in red, with violet, yellow and deep brown stripes mixed onto it.

It was equipped with the white, large-diameter 4-spoke MS-type II wheels paired with the black Avante-type slick tires. The chassis frame and the A parts were molded in grey and violet respectively.

In Hyper Dash! Yonkuro, Kaidanji Sumeragi shows the Hyper Dash machines to the Dash Warriors members, however, he thinks it’s not the time to give them to his team, much to Yonkuro and everyone’s surprise.

It was only after Dash Warriors passed the first course in a race against the Dark Dominion in Shinkuro’s house (which was taken over by Dark Dominion, much to Shinkuro’s dismay), Rinko finally got the new machine along with other remain members. 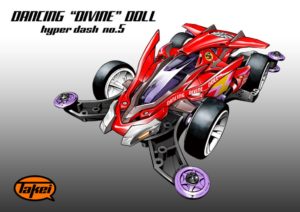 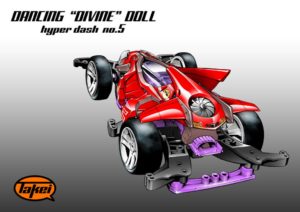 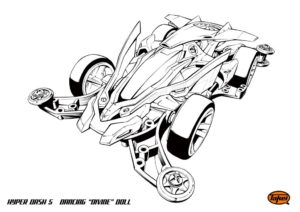 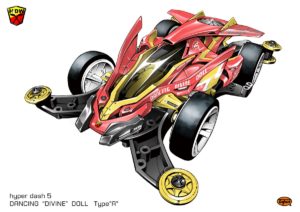