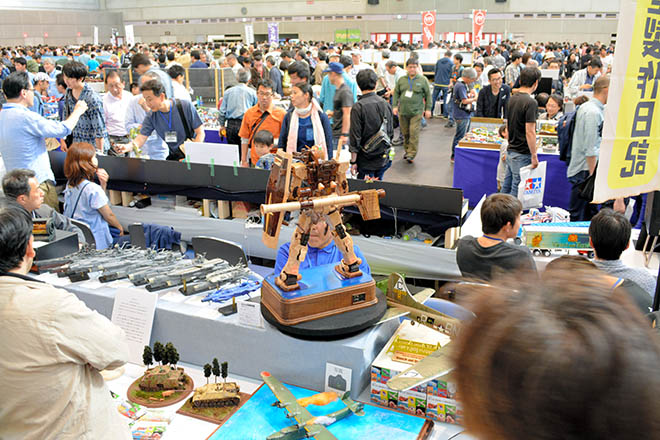 Modelers show off their stuff at a group exhibition of the Shizuoka Hobby Show at Twin Messe Shizuoka. (Takafumi Yabuki)

By TAKAFUMI YABUKI/ Staff Writer
From The Asahi Shimbum

SHIZUOKA–“Big” is a common theme at the Shizuoka Hobby Show.

The venue is surrounded by some of the biggest names in the model kit industry. The annual event is held in the largest exhibition hall complex in the prefecture. And participation from around the world continues to expand.

But even the “holy place” for model lovers has its limits.

“It’s becoming too crowded,” one of the organizers said. “We might have to decline new exhibitors from next year.”

Every year, the Shizuoka Hobby Show attracts about 70,000 visitors. The 57th event was held from May 10 through 13 at Twin Messe Shizuoka.

The show is organized by the Shizuoka Model and Educational Material Cooperative Association, consisting of Tamiya Inc., famed for its Mini 4WD cars, Hasegawa Corp., known for its aircraft models, and Aoshima Bunka Kyozai Co., which has been praised for quality car models. These companies are all based in Shizuoka Prefecture.

A factory of Bandai Spirits Co., which split from giant toymaker Bandai Co. in 2018 and is known for model kits from the “Mobile Suit Gundam” franchise, is also based in the city of Shizuoka.

The show is dedicated to scale models, unlike other toy fairs around the world, and provides a venue for about 80 model manufacturers to showcase their new products.

But it also provides a rare opportunity for amateur modelers to share their works with like-minded fans.

More than 270 modeling clubs in Japan and from overseas showcased about 10,000 works in a group exhibition during the event.

Sven Frisch from Germany said he learned the name “Shizuoka” before “Tokyo.” The 44-year-old said he first assembled a Tamiya tank at the age of 8.

As part of Team Euro, he was here to exhibit a model of a German self-propelled artillery from World War II, which his grandfather served on.

He reconstructed the old vehicle from scratch after studying documents kept at public archives and libraries.

Despite all of his efforts, he said he could not exhibit it in his country for political reasons.

This year, participants from the United States and China, as well as countries in Southeast Asia and Europe, attended the show. According to organizers, the number of amateur exhibitors from abroad has increased in the last couple of years.

Tim Lingle, 54, who runs a model-making school in the U.S. state of New Jersey, was a member of Team America. In his first participation in the group show, he presented a fighter of the imperial Japanese military and a helicopter of the U.S. Navy.

“Shizuoka is the holy place for model fans all over the world,” Lingle said excitedly. “My childhood dream came true.”

He is not the only one with that dream.

Attendance of general visitors and exhibitors from Japan and abroad is expected to continue to climb. And this has created a big problem for the organizers.

Twin Messe Shizuoka was so crowded this year that exhibitors were spilling out into meeting rooms and the reception area.

The show organizer has asked the operator of the complex, an affiliated body of the city government, to build extensions.

However, the city official in charge of the venue said the overall usage rate of the facility is “dwindling, with the exception of the hobby show,” so expansion might not be financially viable.

Other areas of the “holy place” are also seeing more visitors.

Tamiya has been offering reservation-only tours of its headquarters here. About 600 foreign visitors joined the tour in 2017, a fivefold increase from five years earlier, and many are from other Asian countries, such as South Korea and China, according to the company.

The company said the increase may be attributed to the fact that model-making hobbyists are “often wealthy” and fall into the same group of people who can afford to travel to Japan.

The Shizuoka city government is also eyeing the modeling industry as a tourist attraction. It opened a permanent model gallery, Shizuoka Hobby Square, in 2011 in front of JR Shizuoka Station, a Shinkansen stop.