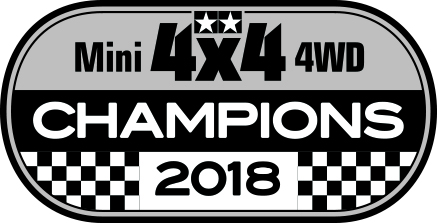 The highest peak of the mini 4WD racer at the Tamiya mini 4/4 accredited competition, Champions.
Tamiya Mini 4/4 Official Games Approved as a “Champions” player who won the Open Class and praise its honor.

About Champions Special Award athletes
Awards for long-term enrollment and athletes who have remarkable results in the Champions will be awarded as “Champions Special Award”.
■ Champions Certified Period The players who have confirmed their continuation for 5 years (Players who received Championship certification after 2014: Continue for 6 years including certified year)
■ Japan Cup Champion (Open Class or Champions) and World in the same year Challenge and championship
■ All series of Mini 4WD Grand Prix (NY, SP, WT etc) at the Champions in the same year, players who won the Japan Cup etc.
■ 2018 Special Award Athletes (2)
Champions Certified for 5 years Continuce fixed players will be special awards players, the long-awaited Champions’ right to exercise can be exercised.

Champions’ race participation procedure
Please have a valid ID card and go directly to the convention headquarters. I will check the name, ID card, we will give you the Champions Entry Seal. (Please come to the venue by the start of the second qualifying at the latest.

Method of race progress when the Champions participate
· First preliminary round: It will be mixed with open class. As the course will be the A course in principle, please show the entry seal so that you can see the Champions as a car inspection staff and starter. (If you finish in 1st place, the second or lower player will be in second qualifying advancement.)

· Secondary preliminary round: We will run out between the Champions. (There is a car inspection column for Champions by the venue.)
* Depending on the number of participants, there are cases where we narrow down the finalists in the second preliminary round. In addition, we may not be able to run if aggregate is delayed by calling.

· Finals: We decide the runners combination by lottery. Since the final will be in progress with other classes, if you have a final call, please hurry to the inspection area.

· About special awards players: Championship races, such as Japan Cup, World Challenge, Championship, etc., will be on stage as Champions. Other Mini 4WD Grand Prix series etc. will make a special race between the special race players in the final race. It is also possible not to exercise the right of running a long time. In that case it will be handled in the following certification period.

· Certified Competition About Mixed Run with Open Class: Combination of 1 race runner in open class and other champions is prohibited.