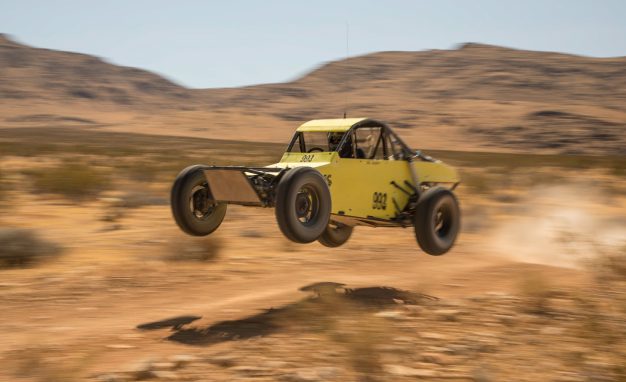 If Baja California resembles a dog’s hind leg, then Ensenada would lie near the top rear of its thigh, while La Paz finds itself nestled in a crook at the top of its toes. In 1967, a motley crew of dudes set off down the peninsula in search of glory and bragging rights. There wasn’t much in the way of cash involved; the level of danger was high, the chance of mechanical failure, very high. Twenty-seven hours and 38 minutes after leaving Ensenada, Vic Wilson and Ted Mangels crossed the finish line in La Paz in a Meyers Manx, having covered 950 filthy miles in the little Volkswagen-powered buggy. 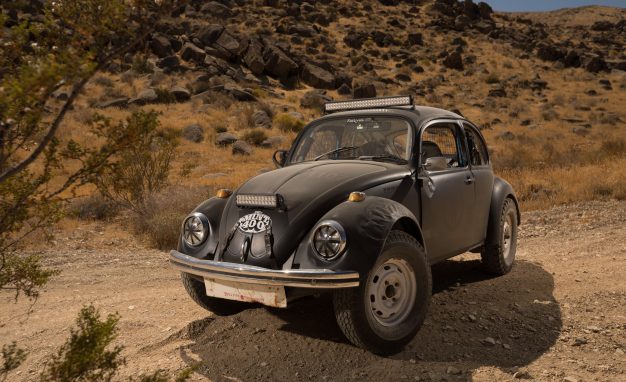 Class 11, the choice of strident retronauts and staunch masochists.

Then, as now, a variety of vehicles contested the race, which began as the NORRA Mexican 1000 Rally and morphed along the way into the SCORE Baja 1000. Modern off-road racing vehicles have been divided into classes, and the most rudimentary of them all are the Class 11 cars. Stock-bodied air-cooled VW Beetles running a 1600-cc engine that could’ve been just as easily built in the late Sixties as it could be today, Class 11s are slow, violent, a hoot, and an enduring testament to the fundamental toughness of Ferry Porsche’s basic design. They can, at least, utilize the independent rear suspension introduced by Volkswagen at the end of the 1960s. The Class 9 cars make do with the old-school swing axle.

More obvious than the swing axle, however, is the 9’s bodywork. There isn’t a whole lot of it, and it shaves about 1000 pounds compared with the weight of a Class 11 machine. There’s a lid over your head that also happens to serve as the door, some flat pieces attached to the tube frame, and well, that’s about it. A near stock Bug suspension is bolted to the front, and a tight little gearbox sits in front of a 1600 built to the same restrictions as a Class 11. In the car I was to drive, there was a total of eight inches of suspension travel out back—four compression, four rebound—and the ride is even more violent than that of a Class 11. On the upside, the light weight means that it has a tendency to skip along the tops of whoops. And out on the 10-mile course laid out for us by Cody Jeffers of Mojave Off-Road Racing Enthusiasts, if there weren’t rocks, there were whoops. Sometimes there were rocky whoops. 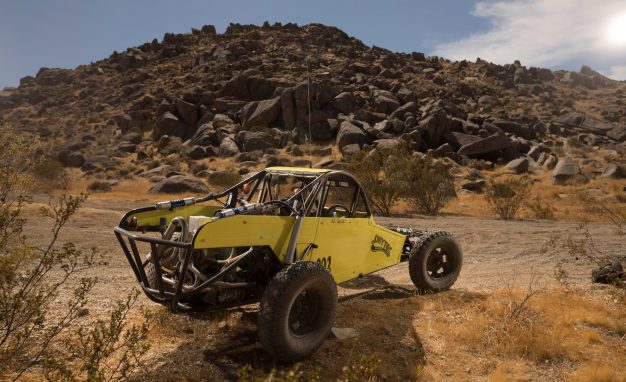 The apple of our dusty eye: the stalwart, archaic, and brutal Class 9 buggy.

Class 9s have another interesting tendency: They’ll basically high-side themselves. Motorcyclists know the high side and fear it. On a bike, it happens when the rear wheel starts to slide out from underneath the rider, gets traction, and then the suspension quickly compresses and unloads, throwing the rider from the motorcycle as if he’s been launched by a trebuchet. Wonderfully, a Class 9 buggy is capable of a similar feat. In sketchy sections under too much power, the car gets a disconcerting side-to-side oscillation going. If it gets wild enough, one side of the suspension quickly loads, then unloads itself. Combine this with the light weight of the thing (somewhere in the neighborhood of 1500 pounds dry), and it’s easy to see how it could potentially end up on its roof.

After watching my performance in the Class 11 car, which basically consisted of pushing it as hard as I could and hoping for the best, Cody Jeffers took me aside and kindly and calmly suggested that such tactics wouldn’t work in the 9. As he was doing so, a fellow journalist rolled in, lamenting the yellow little car and finally, in a fit of dusty exasperation, exclaiming, “Just bury me in it.” Another had become disenchanted after stalling it in a wash. I wasn’t sure what to expect. I did, however, reach into the bag on the back of my motorcycle and pull out a pair of Alpinestars SMX-1 summer riding gloves, figuring the thin palms would do a decent job of approximating driving gloves, given the steering kickback the others had complained about. 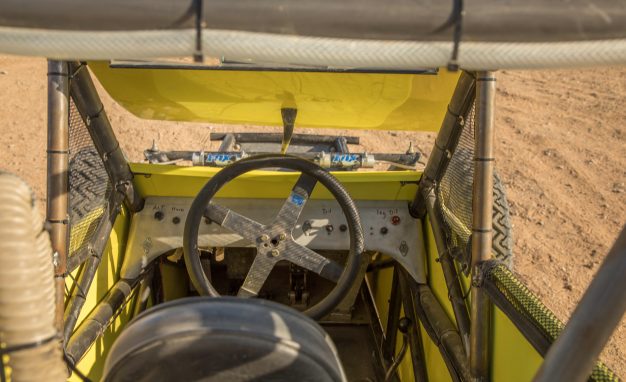 The wee shifter is over there on the right.

I clambered up on the wheel, onto the fuel cell located between the seat and the engine, and down through the roof. I fiddled with the five-point harness while Cody hooked up my radio and plugged the fresh-air blower system into my helmet. Racing clutch to the floor, I fired up the old flat-four and putzed out of the pits.

It felt a little bit like that first live performance with a new band. You’ve practiced, you’ve screwed up, you’ve practiced a bit more, and now you’re on a stage with nothing but wit and skill to guide you. But letting a crowd down is one thing. Hanging upside down from a racing harness while the guy whose buggy you’ve rolled comes to extract you is another.

The first stretch of the course saw me bounding down a straight path. The wheel bucked and kicked, but with a little hand pressure to keep it on line, the car tracked true while desert scrub whipped by on either side. A right turn, and I was up into the rocks and whoops. Baseball-sized rocks could be driven over; basketball-sized rocks were to be avoided. My breathing went shallow, and I couldn’t seem to make it any deeper until I aced a section at speed and involuntarily Wooo!ed in delight. After that, the breaths came normally. Apparently, if you need to kick-start your lungs in the desert, impersonating a twentysomething female hepped up on pumpkin spice lattes and Fireball whiskey does the trick. 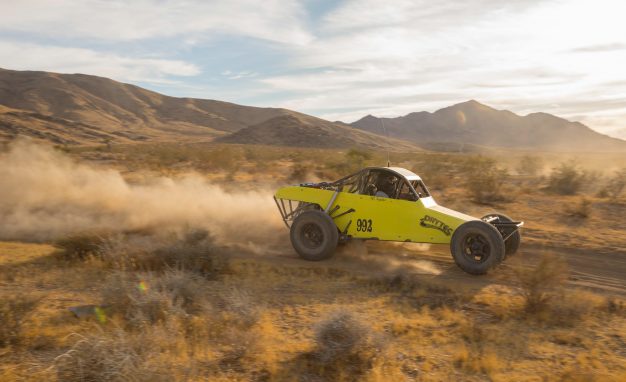 The technique for dealing with whoops is as follows: punch the gas up the micro-hillock to lift the front; let off to let the car float down the other side. In practice, the technique has you tapping the throttle almost like a mid-tempo kick drum. I got a little too aggressive, and the car started the side-to-side oscillation Cody had warned me about. I gently backed out of the throttle, let the car calm down, and dug back in. Later, I mentioned to an off-road racer friend that taming the car and getting back into a rhythm made me feel like a hero but that I didn’t know whether that was because I was a newbie. She replied, “No, I totally do.” Knowing that it’s a lasting feeling makes me want more.

Our course was marked by black arrows marked on blaze-orange placards, and while I’d been around the track as a passenger and a driver in the Class 11 machine and then suffered through an exhibition lap in a Class 5 Unlimited Bug—a tube-chassis Beetle powered by a hogged-out flat-four capable of more than 80 mph in this terrain—I didn’t have it entirely memorized. I missed a turn, came to a stop in front of a sizable creosote bush, thought that I didn’t want to deal with finding reverse in the tight transmission, then realized, “Hey! I’m in a freakin’ buggy!” and just drove over the poor plant to get back on course. 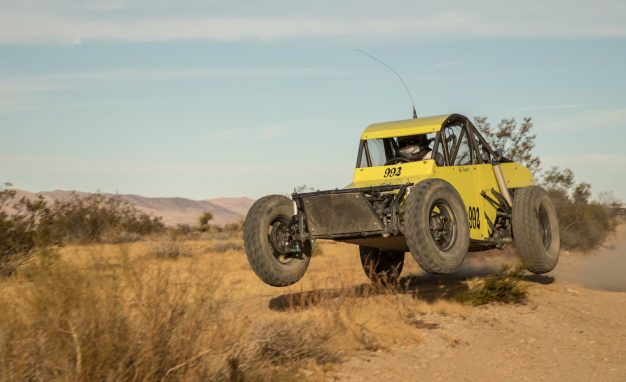 When I was 10 years old, there was nothing in the world I wanted more than a Tamiya Fox R/C buggy. So I scrimped and I saved for the better part of a year, bought the car the day after Christmas 1986, spent the rest of my school break building it, and then had to wait eight more months until I had enough money to purchase a radio, battery, and charger. In short, the 1/10-scale buggy was one of the prized possessions of my childhood. Eventually, I put a ’67 GTO body on it, because I am from the Central Valley. At one point, tearing up a hill in the Mojave Desert, I had a thought: “I’m in the Fox! I’m the little plastic dude I painted 31 years ago!”

I knew the hill with the jump at the top was coming soon. The smooth face of the serious rise in front of me looked like it. I was about 90 percent sure it was the jump. Perhaps foolishly judging that 90 percent is the better percentage of valor, I committed. Cody’d warned me to get out of the throttle if I left the ground. Hammer down, the small yellow buggy bounded up the hill, crested the rise, and caught sweet, sweet air. Right foot up, stuck the landing, back into the power, and on toward the last bit of the course. Tearing toward the pits, there were a couple of nature-made drainage ditches to be aware of, not easily visible in the desert sun. In the interest of avoiding calamity, I dialed back the pace.

Into the pits, engine off. I’d been so occupied out on the course I hadn’t realized just how stupendous the whole experience had been. It was akin to the night Bob Mould invited me onstage to sing “Makes No Sense at All” because he’d blown his voice out. After the song ended, I stepped off the stage and just stood there with my hand over my mouth. A guy smiled and said to his date, “He just realized what he just did.”

Power- and weight-wise, a Class 9 car isn’t that far off a loaded up Harley-Davidson tourer, yet the experience is like riding a four-wheeled dirt bike. Throttle-induced weight transfer rules the day, steering inputs alone are largely suggestions, getting a buggy around the course requires merging with both the machinery and the landscape. Eyes down the course, foot in the gas, make the thing skitter and dance across the terrain instead of plowing through it. I was geeked; I hadn’t been so utterly thrilled in a vehicle in a very long time. It beat lapping Daytona in a Ferrari 488, or ripping around New Jersey Motorsports Park on a Yamaha YZF-R6. Cody unfastened the roof hatch, and I clambered out gracelessly, fairly well pummeled after 40 miles around the course during the afternoon. Jeffers allowed that most of the people who drive Class 11s are in their teens and early twenties. I’m 41. I asked anyway. “Cody, how much does one of these things cost?”