Top class drivers were out in force at the Keitune Racing Speedway on a hot July weekend, ready to do battle in the 2017 JMRCA All Japan Championship 1/10 touring car races. No less than 65 racers took part in the event, which featured Super Expert and Open classes.
Tamiya Racing Factory (TRF) driver Takayuki Kono was in attendance, welcoming the chance to put the freshly-announced TB Evo.7 chassis through its paces against some of the best drivers out there. Also present was TRF member Kiyokazu Suzuki, ready to dispense advice and answer questions from Tamiya fans and drivers.
This was the official racing debut for the TB Evo.7, and while Kono largely used the pre-race test runs to compare the TB Evo.7’s different motor positions, when the race came he was on the pace with his competitors, qualifying in 10th for the Open class A Main. Starting from the back of the A Main field was always going to be a challenge, but Kono proved the shaft-driven TB Evo.7’s capabilities with a sterling drive that saw him mix it with the rest of the grid on his way to an 8th place finish over the 3 final races.
The Open class saw more great news for Tamiya chassis, 2016 Tamiya World Champion
Shuma Shinozawa finishing a brilliant 2nd with his TRF419X.
Takayuki Kono: “It was great to have the opportunity to demonstrate the potential of the TB Evo.7 and its shaft drive in live competition. The smoothness of the steering in particular is something for the public to look out for, and I hope this has whetted everyone’s appetite!”

TRF looks forward to continuing to support R/C drivers and the industry through its activities. 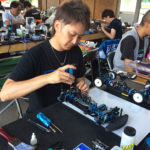 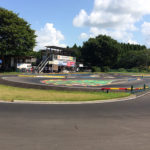 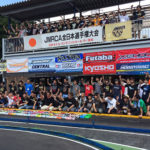 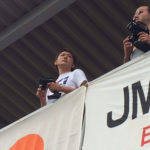 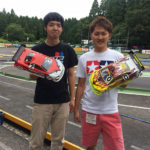 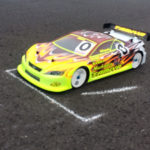