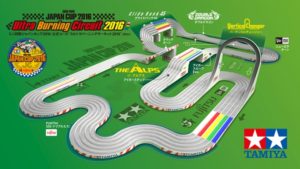 Fujitsu batteries offer four wheel drive mini Japan Cup 2016 official course “Ultra Burning Circuit 2016” will introduce the (about 205m). Immediately after the start, suddenly appear “Quick ter down”. 90 ° bent immediately appeared 30 ° bank. Then proceed to “glide bank 45 °” input. Brake setting is tried. Furthermore Dragon back to two consecutive “Doubled Lagon”. When the clean determine the landing beyond the 180 ° corner of the plane “NEW ERA turn”. Course midfield, appeared followed by a challenge section. First, “di-Alps”. Familiar Eiger slope is increased the angle and height as “Eiger slope Evo.” Evolution. Down the angle is changed to a two-step “Eiger step”. Both machine balance is an important point. And “vertical changer”. Up to a height of about 170 centimeters lane changer is exactly sled stand wall that requires a power as possible climbs. Last occurrence of “wealth Shidori triple es”. To the left and right of the whereabouts of the game in a continuous S-shaped in-and-out are interchanged or become, is the course the last section hold sweat in hand. To determine the four wheel drive mini Japan “Ultra Burning Circuit 2016”. We look forward to your challenge!