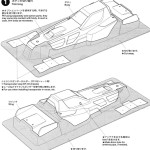 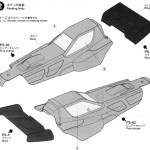 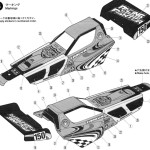 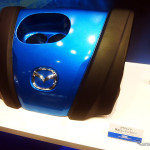 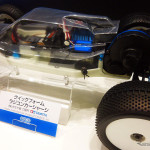 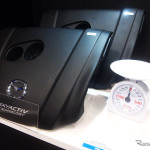 Toyobo, in the “Automotive World 2016” which has been held up to 15 days for foam molding the “Guraimaido” was and Mazda vehicles for engine cover adoption, Tamiya for radio-controlled chassis using GF composite material for press molding “Quick Forms” It exhibited, and the like. Heat resistance, wear resistance, self-extinguishing, for Mazda vehicles for engine cover made ​​of Guramaido with such as oil resistance, contributing to improved fuel economy by further lighter than “normal resin engine cover. Conventional about 30% lightly became “the company staff than goods says. The booth was also placed corner that can compare the weight of the conventional model and the new material model of the engine cover. In addition, impact resistance, high strength, as adoption track record of quick form with high elasticity, part of the radio-controlled car chassis kit “TRF 211XM” the works team of Tamiya to expand has been exhibited. Quick parts that form has been adopted, bathtub chassis of TRF 211XM. The company staff, “while the weight of a conventional aluminum model was 223g, this quick form material model is 120g and about half. Machine lighter, the radio control car that runs. Off-road that contributed to speed up is, flexibility and high rigidity is required. In the bending strength and bending modulus of elasticity is also high this material, I was talking with supposed RC Tamiya becomes even faster. ” This quick form, “plans to also advance Some of realistic car” that (same). I was talking to as a “collision energy absorption and the front and side, the reinforcement of ABC pillar, bumper beam, is set to such an assumption applications engine under cover.”

★ Toward a national convention Shizuoka tournament held
Robot contests that are actively held in various places. Shizuoka science Kanru-Ku-Ru planning exhibition room at the venue on November 21, 2015, creative ideas Robot Contest Shizuoka qualifying tournament for Junior High School Students was held. Robot design and production, it aims to improve the knowledge and skills through the announcement, and it has become a place of Shizuoka Prefecture exchanges each district of junior high school students through the tournament.
The tournament participation of 30 teams from 12 junior high schools in the prefecture (about 50 people). Competition foundation sector and utilization department, is composed of three applications division, each team takes up the challenge of the competition by using your own robot that was manufactured by using the classes and after-school technology department, by making full use of the remote control robot, mechanism degree of completion of the I competed the accuracy of the maneuver. This Shizuoka Prefecture team that topped the tournament won the berth to the Tokai-Hokuriku block tournament (Gifu held). In addition, you can participate in the national convention of January 2016 when winning higher in block tournament.

★ Basic department: “the first time for your 2015”
※ The department by the walking robot having a mechanism that can be manufactured in basic and basic knowledge and skills of teaching junior high technology and home economics.
· During the competition time of 90 seconds, the competition to compete the speed of up to come back and got the items in the shop area, starting from the start area.
Item 2 AA size batteries. It mounted on the robot team members entered the shop area.
– Competition, competition by remote control using a one-to-one wired remote control.
The size of the robot is, none of the limit height within width 200mm × length 200mm. It is assumed that moves are always walking, there shall be those that assist independence on something other than the foot.
Motor can be used up to two pieces of 130,140,260 type.

★ Advanced department: “Reversal of Paper cup”
※ Leverage fundamental and basic knowledge and skills learned in class of junior high technology and home economics, and department by advanced robot than the foundation sector.
· During the competition time of 90 seconds, and the competition to keep in the middle of the seven spot.
– An item that was connecting the two-color paper cup down on the color of the player’s side is pointing in the center of the spot
and Komu can win the spot.
– Competition, competition by remote control using a one-to-one wired remote control.
And size of the robot, within width 300mm × length 300mm × height 300mm.
Motor can be used up to four 130,140,260 type.

★ Application department: “The tug-of-war”
between-competition time 150 seconds, and the competition to attract the 9 ropes in the court center in the robot.
– Surprise Shot mechanism and by using automatic control robot that, it is possible to pull the rope for surprise Dokkiri mechanism.
– Competition, competition by remote control using a one-to-one wired remote control.
Robot at the time of the start of the competition, that fit within the width 400mm × length 400mm × height 600mm. Deformation after start free. The total weight of up to 5kg.
Motor can be used up to six things to a diameter of 20mm. Surprised Shot type and number of the mechanics of the motor is free. 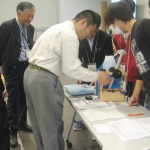 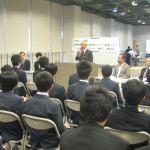 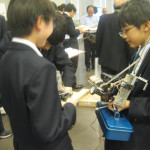 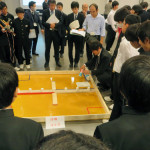 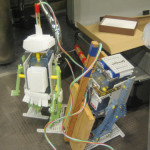 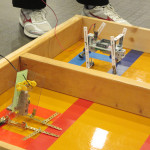 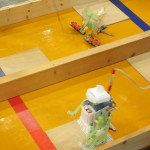 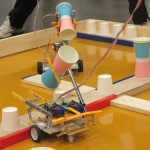 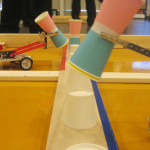 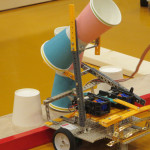 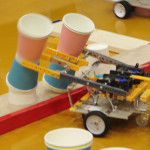 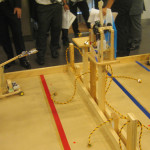 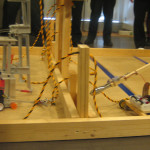 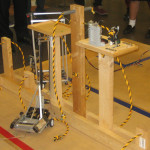 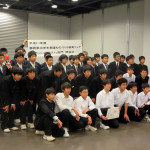 Tamiya 1/24 Sports Car Series appeared attention of NEW model “Mazda Roadster” is! . Its Release Date become December 19 (Sat). In the “Tamiya Model Car Factory Shimbashi store”, Ya Mr. Nakayama was involved in the development of the actual vehicle roadster from Mazda Motor Corporation (chief designer), we will hold a talk show invited Asano Gyochi Mr. (clay modelers) to a guest. Essence whether the model of Tamiya is transmitted of the new roadster and the new generation design concept of Mazda “Tamashido design”?  And sprinkled with scale model development staff of Tamiya, from the “model” their respective positions as the “vehicle”, we would like to talk about your commitment and roadster to manufacturing.
And modeled the first model the first time since ’26 Roadster by Tamiya. Such as design and development techniques of plastic model to change with the times, also will deliver a variety of episodes.

February 7, 2016 (Sunday), will be held the RC Classic Fan Meeting in our 2F Modeler’s Square. Also Dr. Waterfall will attend this time! Customers have a proud of the classic RC car was released in 2000 before Come join us! Please enjoy the RC lecture. Spectators are also welcome. Please refer to the nostalgia of the classic RC car. 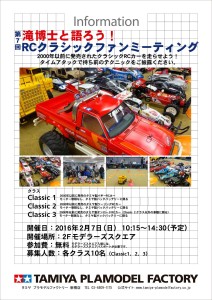 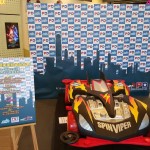 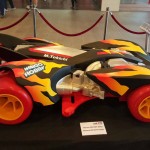 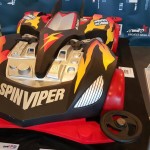