Champion wearing a sponsor color
The Cosworth DFV engine adopts the layout and structure material of the chassis, team Lotus type 49 has brought innovation to the F1 machine. Is the type 49B was thrown from the third round of the 1968 as the improved version. To ensure downforce such as wearing the wing to nose left and right, mounting the engine cowl of wedge shape shape. Equipped with a high-mounted wing to the rear further from the sixth round to remove the engine cowl. Combines the wing stays in the rear upright, it devised to communicate efficiently to the rear wheel downforce generated by the rear wing have been made. This year, G. Hill won the championship by raising three wins, type 49B which resulted in the constructors’ title in the Lotus. Along with its success, reversal from the national colors of up to it, it is also known as a pioneering machine wearing a sponsor color.

About the Model
★ 1968 year F1 champion machine, to reproduce the team Lotus type 49B. Enjoy the finish with texture further by the addition of etching parts and metal parts. ★ 1/12 scale. Overall length 360mm, overall width 165mm, height 122mm. ★ Reproduce the slim form in the real. ★ before and after suspension operates in vehicle similar mechanism. ★ 3-liter V-type 8-cylinder DFV engine also precise finish. ★ In addition to the rear high-mounted wing of the front of the high-mount wing parts were found in South Africa GP of 1969 is also available. ★ hollow rubber tires have a texture. ★ with a mask sealing painted. ★ with driver figure. 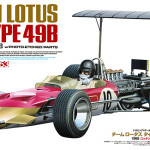 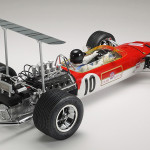 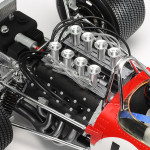 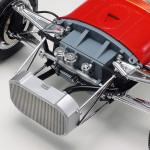 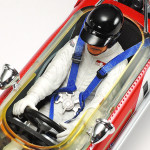 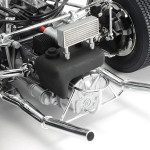 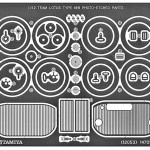