The 1st, Tamiya Shunsaku chairman of (Suruga-ku, Shizuoka City) model largest manufacturer Tamiya (78) attended exchange meeting with the model fans in Shizuoka Hobby Square ward, to touch the outlook for next year of “Shizuoka Hobby Show” it was said, “has asked the exhibitors of the actual vehicle in Self-Defense Forces” where state-of-the-art tank 10 of the Ground Self-Defense Force the company has released a plastic model in July.

Tamiya chairman, also known as in-depth knowledge to the subject of the model. In exchange meeting, told and experience aboard U.S. aircraft carrier to the “George Washington”, and inside story of 10 Tank plastic model development.

It shows a sense of crisis “children of recent do not know how to hold the modelling tool”. On the other hand, showed a policy to enrich the model event of younger target. 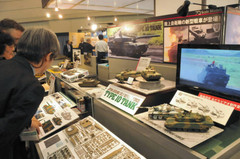 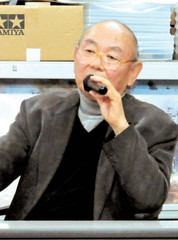