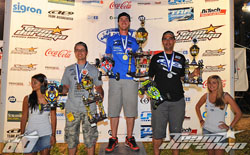 Lee Martin dominated the 2wd and 4wd classes winning TQ in both, as well as the 1st and 2nd legs to secure victory in both classes. In 2wd, Martin drove his 201x to victory in Leg 1 after a close battle with Hupo Honigl and Paul Bradby. Mistkes by all 3 drivers kept them close throughout the race. Martin made no such mistakes in Leg 2, and quickly pulled away from the field to wrap up his overall victory in the Euros.

Lee took the Leg 2 of the A final in Austria to go along with his win in the opening leg to win the 4WD title in the same manner as his win earlier this week in 2WD. In a damp rain-effected meeting, Lee Martin won the only two qualifiers that managed to run to completion to TQ the event. Only Jorn Neumann was able to challenge Lee Martin in both legs 1 & 2 of the A final but wasn’t able to make a pass or be as consistent – making errors that cost him time.