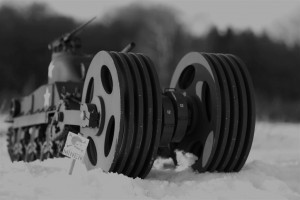 A very interesting conversion from Leonard from the Netherlands who is a member of Battletanks Nederland, here is his description:

“After I built my first tank (a Tamiya Panther G), I wanted to make a conversion of the Sherman tank. In a book I found some pictures of this strange looking mine clearing tank.

History:
In May 1944 two prototypes of the Sherman with T1E3 mine-exploders were sent to Britain. They were demonstrated to US and British officers. These tanks were nicknamed “Aunt Jimima” after a popular pan cake mixes logo, because somebody thought the big exploder wheels resembled gigantic pancakes. The Whiting Corporation built at least75 T1E3s between March and December 1944 (some reports say 200 were built). At least 27 of them saw action with the US first army in France, Belgium, Germany and with the 7th (?) army in Italy. The T1E3 wasn’t very practical, it took the space of 2 or 3 football fields to make an U-turn and with it’s 54 tons it often got stuck in the mud so a pusher-plate (or bumper) was attached to the rear of the tank to permit another tank to get behind the mine-exploder tank and give it a push.

Driving the tank requires much practice and patience, the disks of the mine-rollers sit loosely on the shafts so they can move. I estimate that the turning radius is about 30 meters! Making shorter turns is possible by letting the tank slide sideways but I am afraid this is a heavy burden on the gear boxes. The bumper on the rear is strong enough for another Sherman to give it a push when stuck. The tank has plenty of power to handle the extra weight and can even climb uphill. It is equipped with a battle-unit (BU) but it isn’t able to move around the battlefield quickly. The mine-exploders can be removed easily without the use of any tools, so it can be used as a normal tank as well. ” 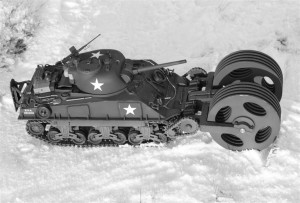 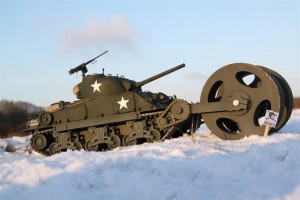