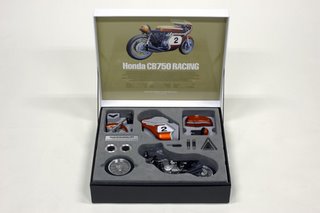 About the CB750 Racing

When it was released in 1969, the Honda CB750 revolutionized the motorcycle industry. With such state-of-the-art features as a 4-cylinder SOHC engine, electric starter, and front disc brake,the production motorcycle was the perfect base for a racing version. New, lighter materials were used for various engine components, the brake system was modified to use two front disc and two rear leading trailing brakes for greater stopping power, and Dunlop racing tires. It was with this machine that American motorcycle racing legend Dick Mann rode to victory at the 1970 Daytona 200 race.