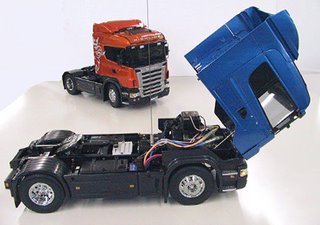 It has been a long time in coming, but Tamiya has heard the demand from fans around the world and is now proud to present award-winning truck maker Scania’s state-of-the-art R470 Highline as the newest addition to our unique 1/14 scale R/C tractor truck series.

About the Scania R470 Highline

Swedish manufacturer Scania has a long history of producing exceptional trucks designed for long-haul transport. The company’s R-series made its debut in 2004 and quickly built a highly favorable reputation that led to it being given the prestigious International Truck of the Year award in 2005. 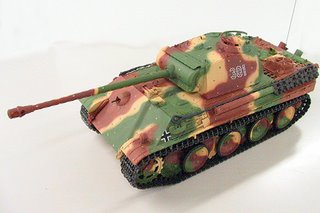 Tamiya’s peerless 1/16 R/C Tank products are the ultimate in realistic indulgence, and with the German Tiger I and King Tiger already released, it is only natural that we now add the famous Panther Type G to the lineup. Tamiya staff even visited the renowned collection of the Musee des Blindes in Saumur, France in order to create the most accurate Panther sounds possible. Pit it against the previously released US Sherman and Pershing tanks on your own mock battlefield. 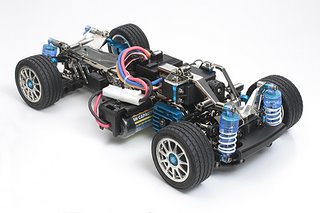 Made popular by the previously released Mini Coopers and the Swift S1600, the M-03 chassis is also currently being used in the “Mini-Sports” category of the Tamiya Grand Prix. Tamiya now answers our fans’ requests and announces the release of a high-performance race version of this chassis, which is packed with new special parts that are only available with this kit. 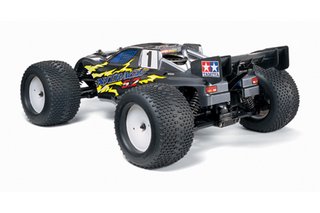 Introducing Tamiya’s new 1/8 R/C Truggy, the Nitrage. This high-performance Ready-To-Run model is packed with innovative features that no other machine in its class has. Modular construction means effortless assembly and convenient maintenance, with all the internal components mounted on a high-strength, press-molded aluminum deck. Servos are directly connected to the fully-enclosed gearboxes to ensure consistently smooth operation and minimal interference. 4-wheel independent suspension with large oil dampers, aluminum slipper clutch, and high-density spike tires mounted on large dish wheels lets it tackle any terrain with ease. The aggressive body and distinctive rear wing matches the “Nitro Rage” image perfectly and will make it the instant center of attention wherever it goes.

POWER AT YOUR FINGERTIPS

MODULAR CONSTUCTION
Off-road racing often means dirt and grime accumulating on the vehicle and interfering with maintenance, to say nothing of all the work you have to do to clean up afterwards. Our designers took this into account when creating the Nitrage and separated the vehicle into 5 major components: Front Gearbox (with steering servo and front suspension), Center Gearbox (with throttle servo and disc brake), Mechanics Box (with fail safe equipped receiver), Engine with Fuel Tank, and Rear Gearbox (with rear suspension and wing). Each of these can be individually removed from the chassis for easy maintenance and cleaning. All 5 components rest on a special high-strength aluminum deck, a pioneering feature for this class, that was press-molded to ensure structural rigidity.

Tamiya is the first to bring this special feature to the R/C world. Even the connection between the engine clutch bell and the spur gear are completely enclosed and protected from outside interference. As a result, all gears have constant stable lubrication and gear backlash is contained by the gearcase. This means the Nitrage does not need to resort to using any heavy and expensive steel gear parts, giving fans more modification flexibility.

The Nitrage is equipped with the R/C world’s first flexible joint drive system, with the spur gear having a short dog bone linkage to the clutch bell, which helps reduce stress on the engine. A durable lightweight aluminum slipper clutch to improve transmission efficiency is also included, which is another first in this class.

The large rear wing on the Nitrage is a double-split design inspired by those equipped on actual WRC cars. Catch pin attachment means the upper surface of the wing remains flat, adding to its stylish appearance. Since the wing is connected to the chassis and not the body shell, it clearly distinguishes the Nitrage as a Tamiya product even when the body is removed.

FOR ADDED CONVENIENCE AND INSTANT ACTION

The Nitrage features universal screw heads for most of its screws, which means all you need is the 2.5mm Hex Wrench to attach and remove them, making maintenance even more speedy (Note that there may be a few screws that require a 1.5mm or 2mm Hex Wrench). Tamiya Handy Starter and Glow Plug Heater are included for easy engine starts even for beginners (Handy Starter requires 7.2V battery pack, sold separately). ADSPEC GP 2-channel transmitter and TRU-03 receiver with fail safe device are included.

Both performance-enhancing and cosmetic Option Parts are planned for release in the near future. Keep an eye out especially for announcements of the 2-speed transmission that will increase top speed to 80km/hr (approx. 50mph)