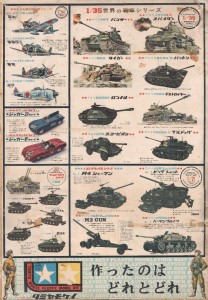 Confidence of current Tamiya, built only good point of the body of the model can simply. We are working closely amazing after-sales service, public relations, market research, to try to study and look back. It is from the very beginning that it also turned as plastic model manufacturer. I will publish a poster of the oldest our laboratory is currently saved here. Lineup of tanks great success since 1/35 Panther tank, sold to sell are aligned, we can also classify the three 1/21, 1/35, and the World Series tank. It is a lineup of imposing together with automatic Jaguar culmination of the movable gimmick or 1/50 Japan Aircraft series expert evaluation was also high. “It ‘s made ​​is which and which” is easy to imagine the place is that it became a sensation “made to it” and “‘ll make this” between the children and if I put it in a toy store in the catch copy of is. Attention will be that “American Light Tank Destroyer” is introduced as a new product of 1/35 series. It is written up as “x2 use TKK25 motor, C battery” models and dimensions as 1/35 carefully, and was trying to modeled clearly tells you. In fact, there is also a version in 1964 General Catalog this description. But Kit No that is not released in fact, was left blank. That the speed competition M41 was in a hurry is as you mention earlier to 10. Vast material that would have been collected new T92 Destroyer of pocket museum series was utilized to. In addition, as a mere typographical error, it is printed on the name of the Crusader replaced Stalin and World Series tank is wrong. By the way, I think that it is hard to see in this photo, but the Bulldogs and Patton poly caterpillar how! (Original rubber caterpillar of course) is. As a result of to ask the president previously for this, such as Patton and I thought “Well, Hey not in time, I’ve had also Nantes had used it to shoot a kit ★ ★ companies” whether only “…” caterpillar sprocket wheel until I’m a Nani. No, If you look closely. . . Is that 35 years ago, it is aging frankly. By the way illustrations of Japanese soldiers at the bottom is KOMATSUZAKI Shigeru artist, but the vehicle of the person in the right but have been released one after another, the person on the left is not ride a vehicle I have to wait ten more years after this could not.